Home ABOMINATIONS When Peace is a Commodity: Trump in the Middle East

When Peace is a Commodity: Trump in the Middle East 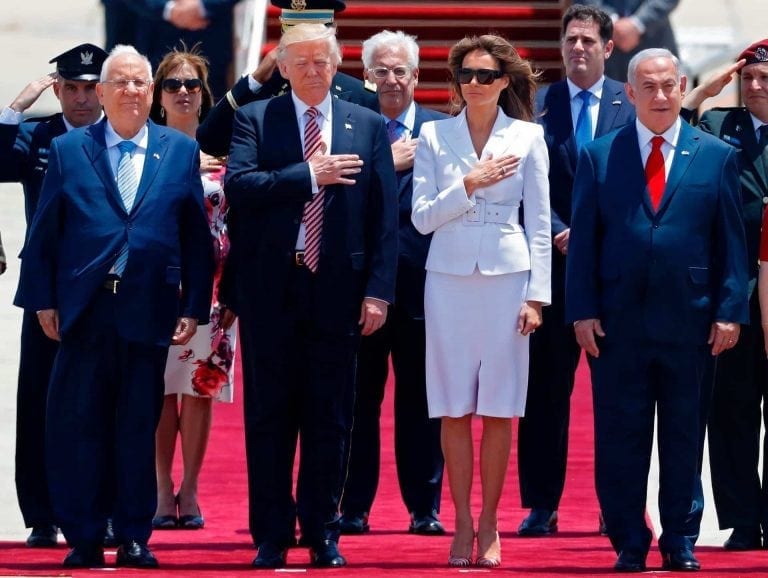 In Riyadh, Trump couldn’t mention where most of the the 9/11 hijackers came from or whose Sunni cult-faith was the inspiration for Isis – nor which country chopped off heads with Isis-like relish. (Answer: Saudi Arabia). And when he arrived in Israel on Monday, Trump was faced with a new censorship protocol: don’t mention who was occupying whose property in the West Bank or which country was outrageously and continuously stealing land – legally owned by Arabs – for Jews and Jews only. (Answer: Israel).

So bingo, in the biggest Middle East alliance ever created in history, the Saudis and the other Sunni Arab dictators and America’s crackpot President and Israel’s cynical Prime Minister have all agreed on the identity of the devil country they can all curse with one voice, inspirer of “world terror”, instigator of Middle East instability, the greatest threat to world peace: Shia Iran.

So within a few minutes of landing at Tel Aviv airport – part of whose runways actually lies on land legally owned by Palestinian Arabs 60 years ago – the Trump speechwriters (for Trump surely cannot write this stuff) were churning out once more their hatred of Iran, of Iran’s “terror”, of Iran’s plots, of Iran’s continuing desire to make a nuclear bomb. And all this when Iran has just re-elected a sane president who actually signed the nuclear agreement two years ago that substantially reduced Iran’s strategic threat to Israel, the Arabs and America.

“Iran must never be allowed to possess a nuclear weapon,” said the US commander-in-chief. Iran “must cease its deadly [sic] funding, training and equipping of terrorists and militias.” A Martian who might also have landed at Tel Aviv at the same time would surely conclude that Iran was the creator of Isis and that Israel was already bombing the cruel and violent cultists of the Islamic caliphate. And Martians – surely smarter than the US President – would thus be much amazed to discover that Israel has been bombing the Iranians and the Syrians and their militias, but has not once – ever – bombed Isis.

No wonder Trump tried to stick to his prepared script. Otherwise he might do something sane. Like congratulate Iran’s new president on his electoral victory and for promising to stick to the nuclear agreement; like demanding an end to Israeli occupation and Israeli colonisation of Arab land; like telling the tired old dictators and princes of the Arab world that the only way they can rid themselves – and America – of “terror” is by treating their people with dignity and safeguarding their human rights. But no, that’s far too sensible and fair and just and moral – and far too complicated — for a man who long ago fell off the edge of reality and entered Twitterworld. So there he was talking of the “ultimate deal” between Israel and the Palestinians – as if peace was just a commodity to be bought or sold. Like the one he’d just fixed in Saudi Arabia: guns for oil and dollars.

But then, sitting next to Netanyahu, the guy did go off script. To the relief of all, he returned to the horrors of the nuclear agreement with Iran, the deal that was “unbelievable”, a “terrible thing” which the US had entered into. “We gave them a lifeline – and we also gave them the ability to continue with terror.” The threat of Iran, he told Netanyahu, “has forced people [sic] together in a very positive way.”

This was truly “unbelievable”. Trump, in his weird innocence, believes that the Sunni Muslim world’s desire to destroy Shia Iran and its allies is the key to Arab-Israeli peace. Maybe that’s what he meant – if he meant anything – when he said that his visit marked “a rare opportunity to bring security and peace to this region, to its people, defeating terrorism and creating future harmony and peace” – that bit was in the script, by the way – in what he called “this ancient and sacred land”. He meant Israel, but he used the same phrase about Saudi Arabia and would no doubt do so about Switzerland, Lesotho or, well, North Korea if it brought any advantage. Or Iran, for that matter.

Who knows if Trump’s going to be able to face up to Jewish colonisation, land theft and Palestine’s own little dictator when he meets Mahmoud Abbas on Tuesday. Or human rights. Or justice. His speech in the Israel Museum afterwards is going to be a humdinger if he wanders off script. But bets are closed on the content: the unity of Sunni Arabs in their hatred of Shia Iran – he’ll mercifully leave out the “Sunni” and “Shia” bits in case this gives the game away – the closer relations between the Gulf dictators and their princes with land-grabbing Israel, the need for Palestinians to end “terror” against their occupiers – the word “occupiers” must also be left out, of course – and America’s eternal, unending, sacred love for Israel right or wrong.

About the Author
Robert Fisk writes for the Independent, where this column originally appeared.

“Iran must never be allowed to possess a nuclear weapon,” said the US commander-in-chief. Iran “must cease its deadly [sic] funding, training and equipping of terrorists and militias.” A Martian who might also have landed at Tel Aviv at the same time would surely conclude that Iran was the creator of Isis and that Israel was already bombing the cruel and violent cultists of the Islamic caliphate. And Martians – surely smarter than the US President – would thus be much amazed to discover that Israel has been bombing the Iranians and the Syrians and their militias, but has not once – ever – bombed Isis.

It’s Not Gonna Be Okay: the Nauseating Nothingness of Neoliberal Capitalist and Professional Class Politics