The Madness of King Donald 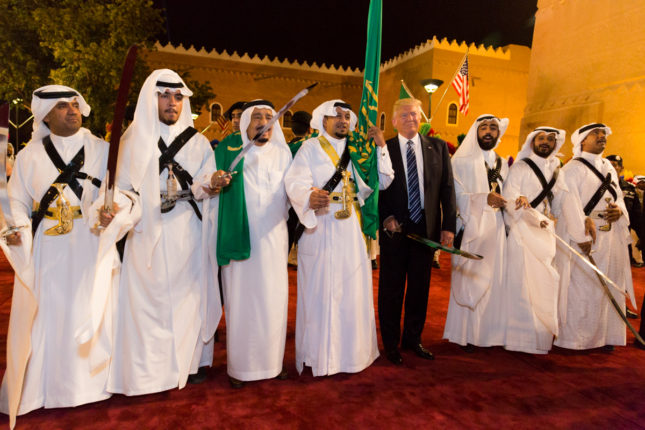 Historians might scratch their heads a long time to figure out when and why it happened, but by the time King Donald was doing the Arabian sword dance and rubbing King Salman’s magic lantern, he was gone. Well, he was just permanently absent, as if the little lucidity that remained had been switched off. In the midst of Byzantine palace intrigues that accused him of collusion with Eurasia, Oceania’s King Donald’s legitimacy and competence to rule had come under challenge. For a King known for his countless imposing castles of concrete, steel and glass, political survival seemed as flimsy as a house of cards. In the late 18th century, the madness of King George III, some argued, was instrumental in the British loss of their American colony. Will history play itself in reverse, and Europe seize King Donald’s shortcomings to reclaim independence? 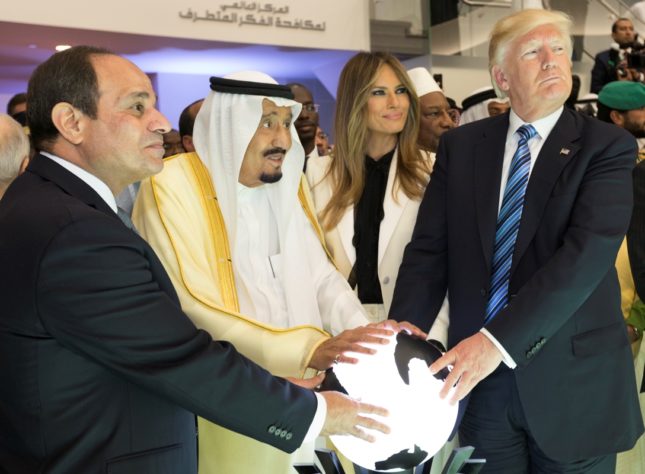 People usually get the rulers they deserve, or at least those who reflect them or their era. At a time when most people seem to suffer from an induced chronic attention deficit disorder, it is fit for a king to rant his vague train of thoughts in 140 characters on a social-media platform. King Donald’s economic adviser and formerly the Duke of Goldman Sachs, Gary Cohn, commented about his ruler’s first trip abroad with the laconic statement: “He came here to learn, he came here to get smart. His views are evolving, which is exactly as they should be.” On all occasions during the trip, however, King Donald’s comportment suggested that not only did he not learn anything at all or get smart, but also that he had not acquired the manners that make social life possible, or even the behavioral skills of children who are trained not to push their classmates. His apparent ignorance of rudimentary world affairs, such as the fact that Israel is part of the Middle East or that NATO does not pay dues to the United States, were profoundly embarrassing. 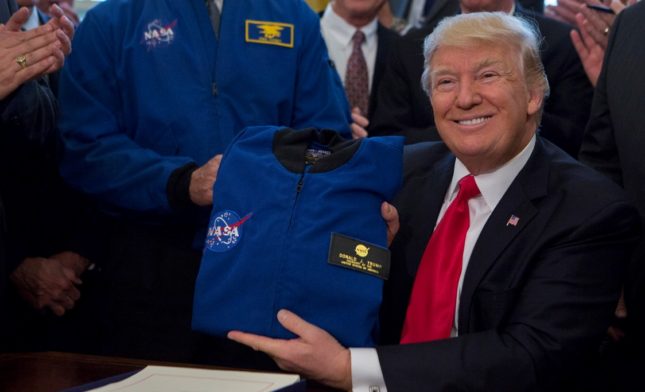 One US founding father, James Madison, wrote: “Knowledge will forever govern ignorance, and a people who mean to be their own governors must arm themselves with the power which knowledge gives.” In the alternate reality that is King Donald’s rule, Madison’s wisdom has been turned upside down, as the ruler appears to represents human gluttony and the basic primal instinct of dominance, glorified into the essence of masculinity and magnified into tyranny, without even the simple physical and emotional awareness of the other. It is our common tragedy that King Donald rules in our theater of the absurd as one who aspires to lead world affairs by bodily throwing his weight around. 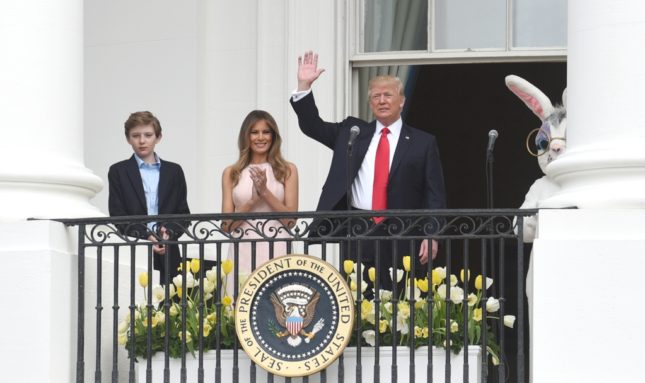 Madness is wisdom: the winner versus loser postulate

In King Donald’s cosmogony, climate change may be denied or debated. Furthermore, according to his own Newspeak, the world may be neatly divided between the winners and the losers. The winner category is defined in the eye of the king by his own criterion of success, which is money. The winners are rich like him, and regardless how they acquire their wealth, they should command respect unless they challenge his authority. King Donald has populated his court with rich sycophants who, by any serious observation, appear to be unqualified for their jobs. The loser category includes the poor, the old, the sick, and the disenfranchised: the billion worker bees who slave away for the potentates of the global elite. Those who act up from their intense alienation are the “evil losers.”

Money is the only parameter in King Donald’s equation. He gloated about his $400 billion arms deal with King Salman, and he tried to enforce the payment of a tribute from those he perceived to be his NATO vassals. In his own kingdom, King Donald will “invest in infrastructure” by privatizing roads, bridges, airports and the functions of municipalities for the benefit of the house of Goldman Sachs. In 1865 Abraham Lincoln made the following statement, which has almost a prophetic ring, to portray the type of cannibalistic capitalism King Donald symbolizes: “The money power preys upon the nation in times of peace and conspires against it in times of adversities. It is more despotic than a monarchy, more insolent than autocracy and more selfish than bureaucracy. It denounces as public enemies all who question its methods or throw light upon its crimes.” 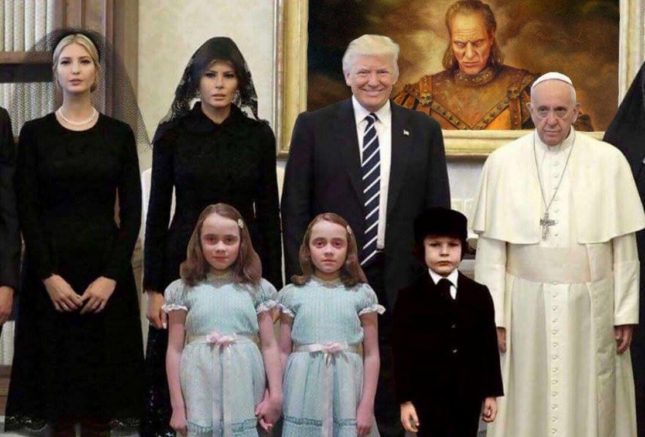 The jester who would be king

While the welfare of millions worldwide depends on the whims and follies of a man who cannot govern in our common tragedy, his actions are perfect material for hilarious slapstick comedy. As an entertainer, King Donald played one of the castle clowns, a rich fool without loyalty to any person or principle. He should have remained as such. Now we watch in horror as his son-in-law and favorite adviser, Prince Jared, gets investigated by a council of wisemen for his alleged collusion with Eurasia, and three aircraft carriers approach Eastasia, knowing that nobody can put it past those in the castle to wag the dog in a nuclear fashion to diffuse the palace crisis. Back in 2016, we asked our esteemed colleague Dady Chery her sentiments about the power-transition process and she said that she would “vote for Donald duck.” It is time to ask her again, in retrospect, in the context of our state of affairs, if there is any advantage to a cartoon king. “Remember that our choice was of a king or a queen. The devil wasn’t there. Otherwise, I would have picked him,” said Dady Chery. 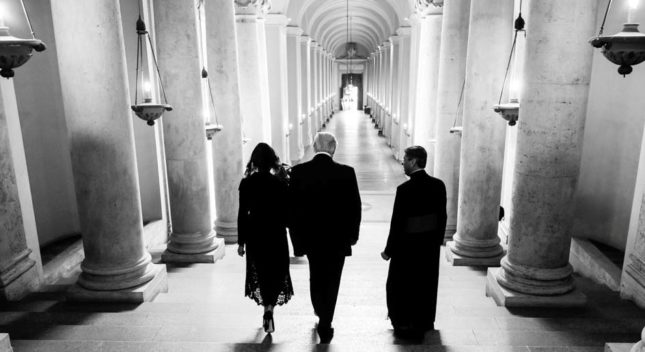 About the Author
Gilbert Mercier is the author of The Orwellian Empire. Photographs one, two, three, four, five, and seven from the White House archive; photograph six from the archive of Alpha.

People usually get the rulers they deserve, or at least those who reflect them or their era. At a time when most people seem to suffer from an induced chronic attention deficit disorder, it is fit for a king to rant his vague train of thoughts in 140 characters on a social-media platform. King Donald’s economic adviser and formerly the Duke of Goldman Sachs, Gary Cohn, commented about his ruler’s first trip abroad with the laconic statement: “He came here to learn, he came here to get smart. His views are evolving, which is exactly as they should be.” On all occasions during the trip, however, King Donald’s comportment suggested that not only did he not learn anything at all or get smart, but also that he had not acquired the manners that make social life possible…

From Truman to Trump (Extra War, Hold the Peace)