BOOKS: Babylon Falling is Essays for Our Times

In Babylon Falling, the latest offering from Gaither Stewart---his collection of political, philosophical, and useful existential essays is a didactic hammer and a simultaneous plea for common justice in the modern world of Capitalist hegemony. Just how absurd and nonsensical can our world be in the face of absolute imperial power, predatory market mentality, perpetual war, and the absence of historical lessons. “War is peace” is the rallying cry for this generation of western political and social leadership. The lessons that should have been learned by ourselves and our “leaders”, if you can call them that, seem to have disappeared into a Kafkasque nightmare, an Orwellian dystopia or perhaps an Escher lithograph. What can we do? Transform!

We are reminded that transformation, accomplished by Russia after the revolution in 1917 is not only rare but non-existent today. And no, reform is not real change, only a realignment of the status quo. “Any transformation requires commitment”, a firm and biased choice of socialism. 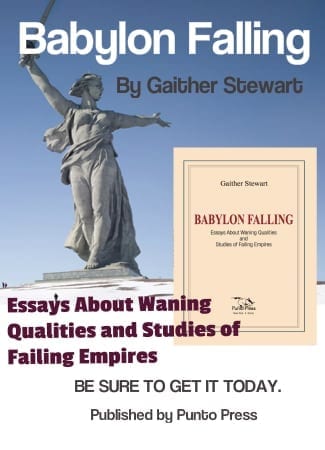 Click on the image to purchase a copy. All books by Punto Press donate a hefty part of the sale to The Greanville Post. This is  a painless way to support our work.

Solidarity is necessary---a most integral but perhaps the rarest of qualities. “Social solidarity and justice go hand in hand—solidarity and a sense of justice united against social injustice.”

What about Commitment? Stewart’s characterization of commitment is like a bold responsibility. Che’ had it. It is not some nebulous character trait but an actual physical act to write what is true or to take up arms against our oppressors, the opposite of indifference! There can be nothing more seminal than our determination with that physical and mental step. What can we do except resist.

Finally, Stewart writes about the kind of choice that Sartre reminded us about after the Fascist destruction of World War Two. In “To be a Communist”, the self-will of choosing to do the right thing in the face of overwhelming capitalist pressure and capitalist fascism is not an easy choice. The mere mention of the word “Communist” in the the US and other countries incites dismissal and even violence. Most do not even have an idea what it means to be a Communist nor the integrity to become a Communist. To be a Communist is to be lonely for sure. But to choose that path shows enlightenment and resistance to the imperial powers that pollute our world with hatred for the different and love for our wealthy masters.

Perhaps the future does hold some hope for socialism and the masses. Capitalism, according to Marx is a stage---a stepping stone to Socialism and Communism. Today’s fascist capitalism sweeping the world has the seeds of its own destruction. Most, if not all of us, will not see the “transformation” set in motion by this implosion of capitalist nationalism. But, while warning us about the lessons we have forgotten, Stewart leaves us with a hope that socialism, or as he prefers, Communism has not disappeared despite the imperialism of the US and the redundant governments of the pathetic EU. Capitalism has not defeated us. It has steeled our minds, opened our hearts, and somehow come full circle with movements back to the left and back to justice.

Finally, Babylon Falling is a warning and a blueprint for the inevitable political, social, and economic future of the planet. Socialism is the only answer to all the intertwined problems that this century and the next century face. From perpetual war to perpetual climate change, answers and solutions cannot come from a small, predatory, capitalist class of entitled barons. Solutions are inevitably tied to a socialist transformation. As Stewart writes: “Well, I found in Marxist Socialism an inkling of what I desired: the intention of the deliverance of man from dependence on a rigged system of economics and the possibility of his eventual victory over inhuman Capitalism which we see now from day to day on its shaky last legs.” 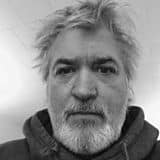 Solidarity is necessary—a most integral but perhaps the rarest of qualities. “Social solidarity and justice go hand in hand—solidarity and a sense of justice united against social injustice.” What about Commitment? Stewart’s characterization of commitment is like a bold responsibility. Che’ had it. It is not some nebulous character trait but an actual physical act to write what is true or to take up arms against our oppressors, the opposite of indifference! There can be nothing more seminal than our determination with that physical and mental step. What can we do except resist.

THE GRAY ZONE: THE FASCISTIC DREAM WORLD IN WHICH IDEOLOGIES ARE DEAD.