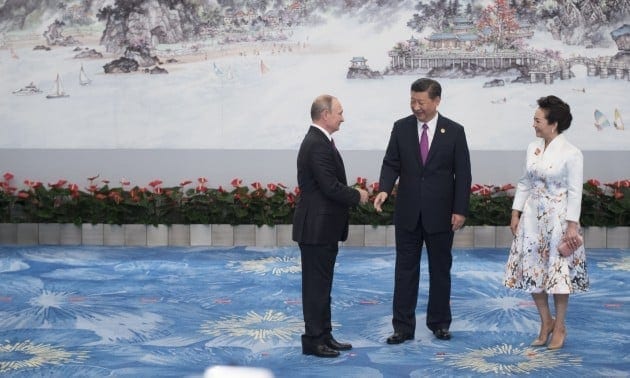 Chinese President Xi Jinping (centre) and his wife Peng Liyuan welcome Russian President Vladimir Putin ahead of a banquet dinner during the BRICS Summit in Xiamen, Fujian province, on September 4, 2017.

Moscow has been busy building agreements that would extend Eurasian connectivity eastward. The question is how to convince the DPRK to play along

The United Nations Security Council’s 15-0 vote to impose a new set of sanctions on North Korea somewhat disguises the critical role played by the Russia-China strategic partnership, the “RC” at the core of the BRICS group.

The new sanctions are pretty harsh. They include a 30% reduction on crude and refined oil exports to the DPRK; a ban on exports of natural gas; a ban on all North Korean textile exports (which have brought in US$760 million on average over the past three years); and a worldwide ban on new work permits for DPRK citizens (there are over 90,000 currently working abroad.)

But this is far from what US President Donald Trump’s administration was aiming at, according to the draft Security Council resolution leaked last week. That included an asset freeze and travel ban on Kim Jong-un and other designated DPRK officials, and covered additional “WMD-related items,” Iraqi sanctions-style. It also authorized UN member states to interdict and inspect North Korean vessels in international waters (which amounts to a declaration of war); and, last but not least, a total oil embargo.

“RC” made it clear it would veto the resolution under these terms. Russian Foreign Minister Sergey Lavrov told the US’ diminishing Secretary of State Rex Tillerson Moscow would only accept language related to “political and diplomatic tools to seek peaceful ways of resolution.” On the oil embargo, President Vladimir Putin said, “cutting off the oil supply to North Korea may harm people in hospitals or other ordinary citizens.”

“RC” priorities are clear: “stability” in Pyongyang; no regime change; no drastic alteration of the geopolitical chessboard; no massive refugee crisis.

That does not preclude Beijing from applying pressure on Pyongyang. Branch offices of the Bank of China, China Construction Bank and Agricultural Bank of China in the northeastern border city of Yanji have banned DPRK citizens from opening new accounts. Current accounts are not frozen yet, but deposits and remittances have been suspended.

To get to the heart of the matter, though, we need to examine what happened last week at the Eastern Economic Forum in Vladivostok – which happens to be only a little over 300 km away from the DPRK’s Punggye-ri missile test site.

It’s all about the Trans-Korean Railway

In sharp contrast to the Trump administration and the Beltway’s bellicose rhetoric, what “RC” proposes are essentially 5+1 talks (North Korea, China, Russia, Japan and South Korea, plus the US) on neutral territory, as confirmed by Russian diplomats. In Vladivostok, Putin went out of his way to defuse military hysteria and warn that stepping beyond sanctions would be an “invitation to the graveyard.” Instead, he proposed business deals.

Largely unreported by Western corporate media, what happened in Vladivostok is really ground-breaking. Moscow and Seoul agreed on a trilateral trade platform, crucially involving Pyongyang, to ultimately invest in connectivity between the whole Korean peninsula and the Russian Far East.

South Korean Prime Minister Moon Jae-in proposed to Moscow to build no less than “nine bridges” of cooperation: “Nine bridges mean the bridges of gas, railways, the Northern Sea Route, shipbuilding, the creation of working groups, agriculture and other types of cooperation.”

Crucially, Moon added that the trilateral cooperation would aim at joint projects in the Russian Far East. He knows that “the development of that area will promote the prosperity of our two countries and will also help change North Korea and create the basis for the implementation of the trilateral agreements.”

Geo-economics complements geo-politics. Moscow has also approached Tokyo with the idea of building a bridge between the nations. That would physically link Japan to Eurasia – and the vast trade and investment carousel offered by the New Silk Roads, aka, the Belt and Road Initiative (BRI) and the Eurasia Economic Union (EAEU). It would also complement the daring plan to link a
Trans-Korean Railway to the Trans-Siberian one.

Seoul wants a rail network that will physically connect it with the vast Eurasian land bridge, which makes perfect business sense for the fifth largest export economy in the world. Handicapped by North Korea’s isolation, South Korea is in effect cut off from Eurasia by land. The answer is the Trans-Korean Railway.

Moscow is very much for it, with Putin noting how “we could
deliver Russian pipeline gas to Korea and integrate the power lines and railway systems of Russia, the Republic of Korea and North Korea. The implementation of these initiatives will be not only economically beneficial, but will also help build up trust and stability on the Korean Peninsula.”

“We are not opposed to the trilateral cooperation [with Russia and South Korea], but this is not an appropriate situation for this to be implemented”

Moscow’s strategy, like Beijing’s, is connectivity: the only way to integrate Pyongyang is to keep it involved in economic cooperation via the Trans-Korean-Trans-Siberian connection, pipelines and the development of North Korean ports.

The DPRK’s delegation in Vladivostok seemed to agree. But not yet. According to North Korea’s Minister for External Economic Affairs, Kim Yong Jae: “We are not opposed to the trilateral cooperation [with Russia and South Korea], but this is not an appropriate situation for this to be implemented.” That implies that for the DPRK the priority is the 5+1 negotiation table.

Still, the crucial point is that both Seoul and Pyongyang went to Vladivostok, and talked to Moscow. Arguably the key question – the armistice that did not end the Korean War – has to be broached by Putin and the Koreans, without the Americans.

While the sanctions game ebb and flows, the larger strategy of “RC” is clear – a drive aimed at Eurasian connectivity. The question is how to convince the DPRK to play along.

Pepe Escobar (born 1954) is a Brazilian journalist. He writes a column – The Roving Eye – for Asia Times Online, and works as an analyst for RT, Sputnik News, and Press TV as well as formerly for Al Jazeera. Escobar has focused on Central Asia and the Middle East, and has covered Iran on a continuous basis since the late 1990s. Escobar has reported extensively from Afghanistan. In August 2000, Escobar and two other journalists were arrested by the Taliban, and accused of photographing a soccer match.[3] The following year, he interviewed Ahmad Shah Masoud, the military leader of the anti-Taliban Northern Alliance, shortly before Masoud was assassinated. On television, Escobar has commented on Russia’s RT network, Iran’s PressTV, and Qatar’s Al Jazeera’s The Stream. On radio, he has been a guest on Sibel Edmonds‘ Boiling Frogs Show, The Peter B. Collins Show, Anti-War Radio with Scott Horton, What Really Happened Show, Corbett Report, The Voice of Russia‘s Burning Point, and Ernest Hancock’s FreedomPhoenix.com.

PEPE ESCOBAR—The DPRK’s delegation in Vladivostok seemed to agree. But not yet. According to North Korea’s Minister for External Economic Affairs, Kim Yong Jae: “We are not opposed to the trilateral cooperation [with Russia and South Korea], but this is not an appropriate situation for this to be implemented.” That implies that for the DPRK the priority is the 5+1 negotiation table.

What Gender? The Evolving Definition of Sexual Identity