HELP ENLIGHTEN YOUR FELLOWS. BE SURE TO PASS THIS ON. SURVIVAL DEPENDS ON IT.
THE TREACHEROUS  DEMOCRATS, AMERICA'S WAR PARTY, ARE STILL PUSHING THE PHONY RUSSIAGATE ACCUSATIONS, WHICH CAN ONLY RESULT IN FURTHER DETERIORATION OF RELATIONS BETWEEN THE WORLD'S TWO TOP NUCLEAR SUPERPOWERS. HOW CRIMINALLY RECKLESS IS THAT, NOT TO MENTION REVOLTINGLY DUMB?

What's even more irritating is that these idiots, for their narrow and abject purposes, now have the audacity to pass the hat to fatten their bloated coffers still more with the dollars of clueless suckers. Does it work? Well, evidently yes, as this manipulative little mail demonstrates. Truly, as genuine sociopaths, these people have no decency. Below, the gem one of our editors received today, unsolicited.

Facebook just found $100,000 in ads aimed at Americans during the 2016 election and secretly linked to a Russian propaganda mill. But it won’t release them to the public! 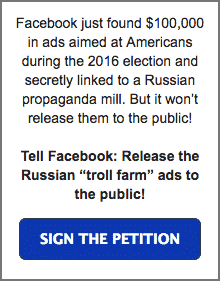 Facebook just announced it found $100,000 in incendiary ads aimed at Americans during the 2016 election, run by hundreds of fake accounts linked to a shadowy Russian “troll farm.”1

Depending on the wording of the ads, the Russian agents may have violated laws banning foreign nationals from attempting to influence U.S. elections – but Facebook is refusing to share copies of the ads with the public.

Sign the petition to Facebook: The public deserves to get to the bottom of the attacks on our democracy in 2016. Publicly release the content of the ads secretly sponsored by Russian nationals.

Foreign nationals or governments are strictly banned under federal election law from contributing to U.S. candidates or making expenditures to influence U.S. elections. It’s also illegal for Americans to solicit or coordinate with that activity.

Many of the ads Facebook just uncovered were geotargeted to specific locations and many mentioned candidates Donald Trump and Hillary Clinton by name. And they were all linked to a notorious, Kremlin-linked “troll farm” in Russia named the Internet Research Agency.

These ads seem very likely to cross the legal line, but it all depends on the content of the ads, exactly what Facebook won’t release.

The content of these ads would be invaluable for legal experts, reporters, and public interest groups working to get to the bottom of the attempts to undermine our elections – and to help protect our democracy from future attacks.

These shocking revelations come after Facebook denied for months that Russian nationals had run any paid ads through their system to influence the election.2

Facebook CEO Mark Zuckerberg even called it a “pretty crazy idea” to think misinformation on Facebook played any role in the campaign result!3

In June, Demand Progress’s Rootstrikers project delivered more than 200,000 petition signatures to the Federal Election Commission calling for an investigation into whether Russian hacking and social media activity violated federal election laws, and whether the Trump campaign illegally colluded with their efforts.

Now, as an organization representing internet users, we’re calling on Facebook itself to step up.

After positioning itself as an online “town square” where Americans should spend much of their democratic life, Facebook should act to help the country get to the bottom of the recent attacks on our democracy.

Sign the petition: Facebook must publicly release the ads it uncovered that were secretly sponsored by Kremlin-linked Russian nationals.

Thanks for taking action,

PAID FOR BY DEMAND PROGRESS (DemandProgress.org) and not authorized by any candidate or candidate's committee. Contributions are not deductible as charitable contributions for federal income tax purposes. Join our online community on Facebook or Twitter.

You can unsubscribe from this list at any time.

What’s even more irritating is that these idiots, for their narrow and abject purposes, now have the audacity to pass the hat to fatten their bloated coffers still more with the dollars of clueless suckers. Does it work? Well, evidently yes, as this manipulative little mail demonstrates. Truly, as genuine sociopaths, these people have no decency. Below, the gem one of our editors received today, unsolicited.

The Dark Side of William F. Buckley, Jr.

In a time ago, there was an American Performer that said ‘there is a sucker born every minute’. I can not recall his name but I believe he was a circus owner … how appropriate!

Great article! Now for “ger” the name of the performer was P. T. Barnum founder of the famous circus that bears his name.

Why would we believe a claim about “hundreds of fake accounts linked to a shadowy Russian “troll farm?” The Russian Tale has lost its magic precisely because every anti-Russian claim to date has fallen flat under the weight of the facts. What Russian “troll farm,” and is it the same as our own troll farm? What evidence do you have to support that claim? (And if either actually pays, where can one sign up?) Here, we’re just supposed to take someone’s word for it…

What I did find out for myself over the past year is that anyone who has had the audacity to criticize the Clinton right wing have automatically been labelled “Russian bots” or “Russian trolls.”