“It’s absolutely astonishing that anyone believes this.”

Most national and international news reported in the US is now an extended Red Scare narrative punctuated by stories about Trump’s unparalleled boorishness and recklessness, which can of course be blamed on Russia since Trump never would have been elected if thirteen Russian trolls hadn’t prowled the Internet for potential Trump voters and targeted them with information about Hillary Clinton’s international crimes and the global influence peddling operation known as the Clinton Foundation.

The new bogeymen blamed for electing Trump—Facebook and Cambridge Analytica—are getting some play, but President Obama’s 2008 campaign won prominent advertising awards for integrating social and traditional media, and Carole Davidson, Obama’s 2012 Obama for America Media Director, just stepped up to say that Facebook allowed them to mine data. That doesn’t mean that rationality will win the day, and so far Russian treachery continues to dominate the news.

Just last night my local community radio station—which prides itself on bringing you the news that no one else will because it doesn’t rely on corporate money—reported at least three Russia-did-it or Russia’s-about-to-do-it stories on its hour-long newscast. One was a Feature Story Newswire about Bill Browder, an international investor who gave up his US citizenship to avoid taxes, became the largest foreign investor in Russia, after which he was convicted of tax fraud in Russia, and then testified before the House Intelligence Committee about Russian intervention in the last US presidential election.

“The formula for manufacturing Novichok is available in a book for sale on Amazon.” 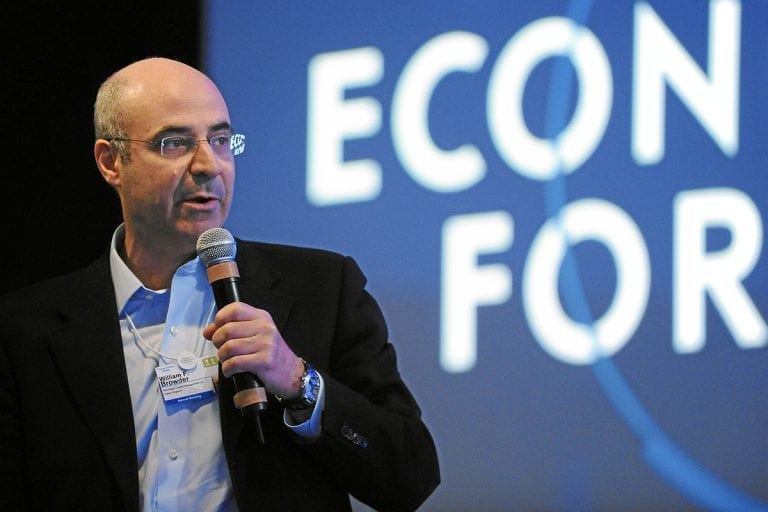 The sinister warmonger and crook William Browder, rubbing elbows with fellow plutocrats at the WEF.  Ironic this man should be related to the CPUSA's onetime longtime leader, Earl Browder.

Browder now resides in Britain and says he’s likely to be the next target of an international Russian hit squad because he’s been a very vocal public critic of Vladimir Putin. He’s demanding a firm British and international response to Russia’s alleged chemical weapons poisoning of defunct double agent Sergei Skripal and his daughter Yulia in a British cathedral town of 40,000 on March 4. Russia released Skripal from prison and sent him into retirement in Britain in a 2010 spy swap.

The Washington Post speculated at great length about the Russian motive for such an admittedly implausible attack to make it seem less so. Like all the other outlets in control of the American mind, they began with the a priori assumption that “a former Russian spy, Sergei Skripal, was poisoned with Novichok, an extremely toxic Russian nerve agent.”

The Post did not appear to have come across Judith Miller’s May 25, 1999 New York Times report that the Pentagon—in cooperation with the government of Uzbekistan, in the former Soviet Union—would take charge of “demilitarization and decontamination" at the Nukus, Uzbekistan chemical weapons plant. The plant, she wrote, had been the Soviets’ major research and testing site for “a new class of secret, highly lethal chemical weapons called ‘Novichok.’”

However, since the formula for manufacturing Novichok is available in a book for sale on Amazon, we shouldn’t rush to conclude that the US or Russia or any other determinate entity used it in a botched attempt to assassinate the Skripals.

Corporate press, US and UK state press, and US and UK officialdom nevertheless univocally repeat that since Russia [the Soviet Union] manufactured Novichok, Russia must have been behind the attack. This text from a March 12 ABC News story is just one of many histrionic examples.

ABC News: And today Prime Minister Theresa May told Parliament the weapon was Russian made!!!

Theresa May: It is now clear that Mr. Skripal and his daughter were poisoned with a military grade nerve agent of a type developed by Russia. It is highly likely that Russia was responsible.

LIONS AND TIGERS AND RUSSIAN BEARS!!! OH MY!!! UK Foreign Minister Boris Johnson was all over US and European airwaves snorting that “the Russian denials grow increasingly absurd," and that Vladimir Putin had directly ordered this assassination-by-Novichok on British soil.

Craig Murray, former UK Ambassador to Uzbekistan, writes on his blog that “The Novichok Story Is Indeed Another Iraqi WMD Scam .” The fifth and last point of his argument is: "The 'Novichok' program was in Uzbekistan, not in Russia. Its legacy was inherited by the Americans during their alliance with Karimov, not by the Russians.”

Murray continues to post updates on the Novichok scam on his blog, CraigMurry.uk.org . On May 19, he told RT that “it’s absolutely astonishing that anyone believes this.” He also, said, “The idea that we have an investigative or free journalism in this country has been sadly exposed [as false] by this case.”

About the Author
Ann Garrison is an independent journalist based in Oakland California. In 2014, she received the Victoire Ingabire Umuhoza Democracy and Peace Prize for her reporting on conflict in the African Great Lakes Region. She can be reached at @AnnGarrison or ann@kpfa.org .

Behind the Facebook data scandal: The drive to censor the Internet