Home ABOMINATIONS Wake Up to Trump, Distraction and War with Iran

Wake Up to Trump, Distraction and War with Iran 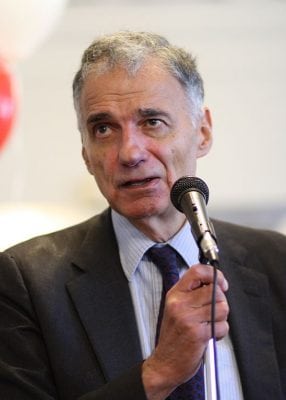 In mid-May, super-war hawks Donald J. Trump (worried about the Mueller investigation), John Bolton, Trump’s new unconfirmed national security advisor, and new Secretary of State Mike Pompeo, are likely to pull out of the Iran nuclear accord. This would open the way for Israel’s Prime Minister, Benjamin Netanyahu, and his Congressional allies to push for armed conflict with Iran.

All of the above say Iran is in compliance with the accord’s demand to stop its nuclear arms program and allows thorough inspections by the International Atomic Energy Agency. All parties agree that if Trump disrupts this accord, even more havoc will break loose in that volatile region. This is what both Israel and some Persian Gulf nations may desire, as long as the U.S. bears the burden of this reckless action and plunges into another deep quagmire to add to those in Iraq, Syria, and Afghanistan.

You’d think that the Israeli government couldn’t play Uncle Sam a sucker to fight yet another war—this one against Iran with American soldiers and money. But the three warmongers, named above, are driving U.S. foreign policy in the Middle East. Unfortunately, Congress regularly disregards its constitutional duties and follows the lead of AIPAC lobbyists.

Both Trump and Netanyahu paint Iran as the most dangerous terrorist state in the world. Really? It wasn’t the Iranian regime that illegally cost over one million Iraqi civilian lives and blew that country apart. It was George W. Bush and Dick Cheney becoming major war criminals whose actions cost the lives of over 5,000 American soldiers, injured or made sick well over 100,000 more, and wasted trillions of dollars continuing to this day.

Iran wants its sphere of influence. The country has memories. For example, in 1953, the U.S. overthrew Iran’s democratically elected prime minister and reinstalled the dictatorial Shah who ruled despotically for the next 26 years. In 2002, George W. Bush targeted Iran, Iraq, and North Korea, referring to them as the “axis of evil.” Iran saw what he did to Iraq and didn’t want to take chances by surrendering its security perimeter.

The U.S. has Iran militarily surrounded on its eastern, western, and southern borders. Israel has working spies in Iran, creating secret sabotage and mayhem. Israel, which has illegally bombed civil war-wracked Syria (no threat to Israel) dozens of times, has recently hit locations known to have Iranian advisors to Bashar Assad, Syria’s ruler, while fighting ISIS, along with U.S. forces there. Iranians have been killed in these raids.

So who is the aggressor here? Unlike Israel’s many invasions and military incursions, Iran, a poor country, has not invaded any country for over 250 years. Iraq’s dictator invaded Iran in 1980, with U.S. backing, costing Iran an estimated 500,000 lives.

No country, save the U.S. Empire, has the chutzpah that Netanyahu possesses because he knows the U.S. government and the mass media will embrace his expanding push for U.S. militarism in the Middle East.

Note the interview by NPR’s Steve Inskeep of Israeli Ambassador to the U.S., Ron Dermer, on May 1, 2018. Inskeep was trying to be firm with Mr. Dermer, who was going beyond any evidence that Iran possesses a nuclear weapons program.

The ambassador was showcasing the theft of old Iranian documents from an Israeli nighttime raid on an Iranian warehouse. (The New York Times called these documents about a long-suspended program “Mr. Netanyahu’s Flimflam on Iran”). When that ploy didn’t work, he tried to tell Inskeep that Iran will get to a nuclear bomb by staying with the deal because existing restrictions will be removed someday and the existing inspections are “a joke.” He also condemned Iran for violating the Nuclear Non-Proliferation Treaty.

The American media are notorious for their subservience to Israel, and their coddling of corrupt, semi-deranged Zionist warmongers like Benjamin Netanyahu. The clip below (by CBS) is only too typical of their so-called coverage of the Middle East. As noted elsewhere on this site, Israeli media are more likely to criticize Israel's criminal government than any American paper or television network.

The ambassador’s flailing accusations could have, but did not, set the stage for Inskeep to ask the following obvious question:

“Mr. Ambassador, Israel has long had a nuclear weapons program, with an estimated 150 or more nuclear bombs at the ready. Also, your country has rejected belonging to the Nuclear Non-Proliferation Treaty so you can avoid any international inspectors provided by this global agreement. Your critics would say, ‘Who are you to complain about Iran, which is afraid of not only your bombers made in America, but also your large nuclear bombs and warheads?’”

As in years past, the Israeli government won’t tell the globally recognized truth about having nuclear weapons. Instead, the ambassador would have uttered the boilerplate evasive reply that Israel would not be the first to use nuclear weaponry in the region.

For decades, Israeli leaders and emissaries have come to the U.S. for congressional speeches, for interviews on the Sunday network talk shows and in the print media. Questions about Israel’s nuclear bombs have not been juxtaposed with Israel’s desire for the U.S. to overthrow the Iranian regime or bomb Iranian installations. Trump’s war hawk in the White House, John Bolton, wants to go further. In the past, Bolton has urged Israel to militarily annex the Palestinian West Bank, presumably as a twofer.

Will enough American people, including knowledgeable retired national security and military officials, stand up to stop this slide toward another conflagration that will likely produce blowback in the U.S.?

ABOUT THE AUTHOR
Ralph Nader is a consumer advocate, lawyer and author of Only the Super-Rich Can Save Us!

Media Use Disinformation To Accuse Russia Of Spreading Such