Trump Ends The Nuclear Deal With Iran – What’s Next? 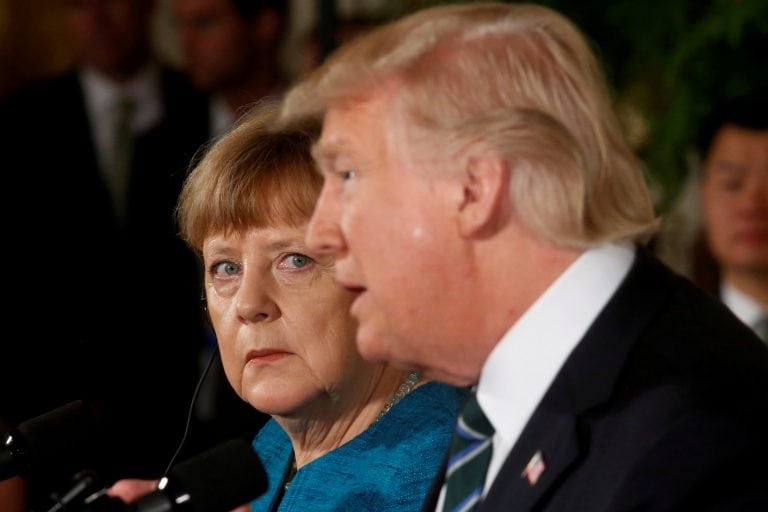 With a very belligerent speech Trump nixed the nuclear deal with Iran. He also lied a lot in it. Neither is a surprise. The United States only keeps agreements as long as they are to its short term advantage – just ask native Americans. One can never count on the U.S. to keep its word.

Trump will reimpose U.S. sanctions on Iran because:

Three European countries, Britain, France and Germany, were naive enough to think they could prevent this. The EU3 offered the U.S. to put additional sanctions on Iran for other pretended reason – ballistic missiles and the Iranian engagement in Syria. I was disgusted when I first read of the plan. It was obvious from the beginning that it  would only discredit these countries AND fail.

Luckily Italy and some eastern European countries shot the effort down at the EU level. They were not willing to sacrifice their credibility over the issue. The nuclear agreement was signed and should be followed by all sides. They pointed out that there was no guarantee from Trump that any additional European effort would change his view.

Over the last weeks some last EU3 attempts to influence Trump were made. They were in vain:

On Friday, Pompeo organized a conference call with his three European counterparts. Sources who were briefed on the call told me Pompeo thanked the E3 for the efforts they had made since January to come up with a formula that will convince Trump not to pull out of the nuclear deal — but made it clear the President wants to take a different direction.
…
After Trump’s statement, the European powers want to issue a joint statement which will make it clear they are staying in the Iran deal in an attempt to prevent its collapse.

The sanctions Trump will reintroduce are not just limiting U.S. dealings with Iran, but will also penalize other countries. That will lead to a flurry of protective measures as at least some of those other countries will limit their exposure to U.S. rules and may even introduce counter sanctions:

“We are working on plans to protect the interests of European companies” Maja Kocijancic, EU spokeswoman for foreign affairs, told reporters in Brussel.

Iran will largely stick to the nuclear deal if the EU effectively defends it and does not hinder Iranian deals with European companies. If the EU fails to do so the nuclear agreement will be null and void. Iran will leave the deal. The neoliberal Rouhani government that agreed to the deal will fall and the conservatives will be back. They will defend Iran’s sovereignty at all costs.

The U.S. seems to believe it can go back to the same position Obama had build up in the years before the nuclear deal. Iran was under UN sanctions and all countries, including China and Russia, held them up. The Iranian economy was in serious trouble. It needed to negotiate a way out. That situation will not come back.

U.S. credibility has been seriously damaged. Its soft power is gone. Its hard power has shown to be inadequate in Afghanistan, Iraq and Syria.

China and Russia are both making huge deals with Iran and are now effectively its protectors. While they have no common ideology all three oppose a globalized world under exclusive “western” rules. They have the economic power, the population and resources to do so. Neither the U.S. nor Europe has come to terms with that.

Iran has not only new allies but gained in the Middle East because of U.S., Israeli and Saudi stupidity. The wars on Iraq, Syria, Lebanon and Yemen have all strengthened Iran’s position while it largely kept largely out of them. The recent election in Lebanon went well for the ‘resistance’ camp. Within Lebanon Hizbullah can no longer be challenged. The upcoming elections in Iraq will result in another Iran-friendly government. The Syrian army is winning the war waged against the country. The U.S. position in Afghanistan is hopeless. Saudi Arabia is now in a fight with the UAE over the war on Yemen. The GCC spat with Qatar is still unsolved.

While Israel wants to keep Iran as a boogeyman to divert attention from its genocidal campaign against Palestinians, it does not want a large war. Hizbullah in Lebanon has enough missiles to make modern life in Israel untenable. A war on Iran could easily end up with Tel Aviv in flames.

There are some people in the Trump administration who will want to wage war on Iran. The Bush administration also had such plans. But any war gaming of a campaign against Iran ended badly for the U.S. and its allied states. The Gulf countries are extremely vulnerable. Their oil output could be shut down within days. That situation has not changed. The U.S. is now in a worse strategic position than it was after the invasion of Iraq. As long as somewhat sane people lead the Pentagon they will urge the White House not to launch such an endeavor.

The U.S. withdrawal from the nuclear deal is a huge mistake. Defense Secretary Mattis spoke against it. Will Trump make an even bigger mistake despite the opinion of his military advisors? Will he wage war on Iran?

[/su_spoiler]
ABOUT THE AUTHOR
"b" (Bernhard?) is a German blogger and founding editor of Moon of Alabama.

Trump and Netanyahu May Not Want War With Iran, But They May Fall Into One Anyway

Is Israel a psychopath?