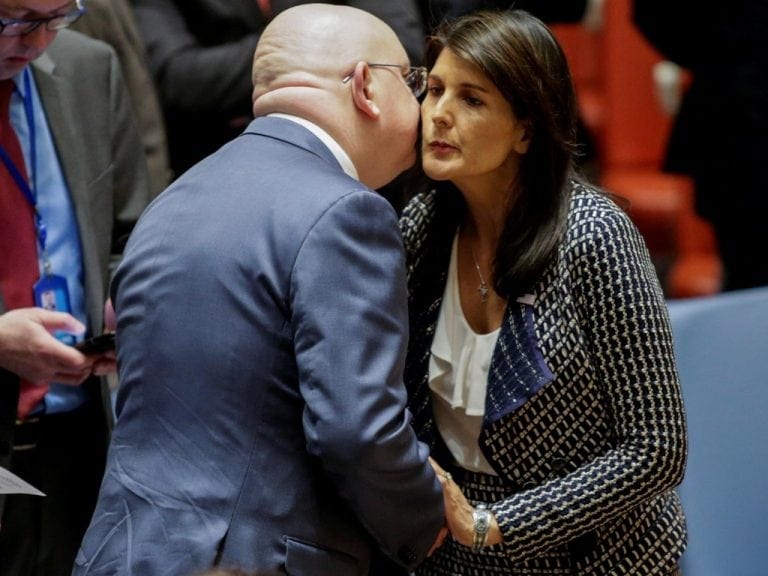 The sociopathic Nikki Haley, the US UNO “ambassador” embracing —of all people—her Russian counterpart.

The Governments of Syria and Russia claim to have proofs that the U.S. coalition that has invaded and now occupies Syria has prepared chlorine and sarin gas attacks for Idlib and other areas where Syria and Russia are trying to destroy all jihadists — prepared attacks designed to be blamed against Syria’s Government.

Headlining on Friday, September 7th, “New details surface about terrorists’ preparations to stage chemical attack in Idleb and Hama”, the official Syrian Arab News Agency reports from its sources in both Idlib and Hama in Syria, that:

The White Helmets have picked three new locations for carrying out the attacks after information was leaked about the previously-planned locations, and the three locations are: al-Najia town in Jisr al-Shughour countryside, al-Hamawsh town in the northwestern countryside of Hama, and Kafr Nubbul town in Idleb countryside.

The sources affirmed that sarin gas and chlorine gas shipments have been transported to these three areas, and that dozens of children ages two to ten who had been abducted recently from a camp near Salqin now were transported from Jisr al-Shughour to an unknown location.

The sources suggest that it’s likely that the White Helmets and the armed groups will carry out a real massacre this time to avoid the inconsistencies that surfaced in the staged chemical incident in Douma.

The next day, SANA reported that Russian intelligence had confirmed that there was:

full readiness of participants in such provocations, the play [or set-up] would be completed by Thursday evening September 13th, stressing that terrorists “are waiting for a special order from foreign contacts as a signal to start the practical phase.”…

Terrorist organizations in cooperation with the so called “White Helmets” acting as an arm of the terrorists, “Jan” in Syria, have shipments of chlorine gas and sarin gas to several regions of idleb and Hama countryside, to move dozens of children from addicted hospital In the middle of nowhere who were kidnapped recently from a camp near the city of salqin aged between two and ten years in order to prepare for chemical play scenario in these areas to accuse the Syrian Arab Army…

[And there are also] preparations for armed terrorist groups in Latakia and Aleppo, Idlib and surrounds, to use toxic chemicals against civilians and widely in order to disrupt the military operation against terrorism In those areas.

The source for that allegation regarding Nikki Haley was unfortunately not linked-to but was this from the current President of the United Nations Security Council, America’s Ambassador, Nikki Haley, speaking on September 7th:

The Assad regime and its enablers, Russia and Iran, have a playbook for this war. First, they surround a civilian area. Next, they make the preposterous claim that everyone in the area is a terrorist, so every man, woman, and child becomes a target. Then comes the ‘starve and surrender’ campaign, where they keep attacking until the people no longer have food, clean water, or shelter. It’s a playbook of death. The Assad regime has spent the last seven years refining it with Russia and Iran’s help.”

Polling by a British pollster, Orb International, which has been done annually throughout Syria since 2014, has shown that Idlib province is by far the most pro-jihadist region of Syria, and that over 90% of the residents there support Al Qaeda and/or ISIS. Collateral damage is routinely accepted in war; and, when, in 1945, the U.S. and Britain firebombed Dresden, and the U.S. nuked both Hiroshima and Nagasaki, the slaughter of civilians wasn’t “collateral damage” but was actually the purpose.

But now, the U.S. and its allies warn Syria and Russia not to bomb the only region of Syria that is overwhelmingly supportive of the very same “Radical Islamic Terrorism” that Donald Trump had railed against while running for the U.S. Presidency. Syria’s Government has been bussing all surrendered jihadists to Idlib, and so the percentage of jihadists there has increased even more, presumably to well over 90%. But U.S. President Donald Trump is threatening war against Russia, World War III, if Russia supports its ally, Syria’s, efforts to exterminate all jihadists in Syria. The United States Government cites ‘humanitarian concerns’ as the reason for threatening WW III.

Unintended Consequences: Did Trump Just Give the Middle...

Veteran Speaks At “No War On Iran” Rally...

How Arabization changed Islam in Asia