Invasion of the Empire’s Pods 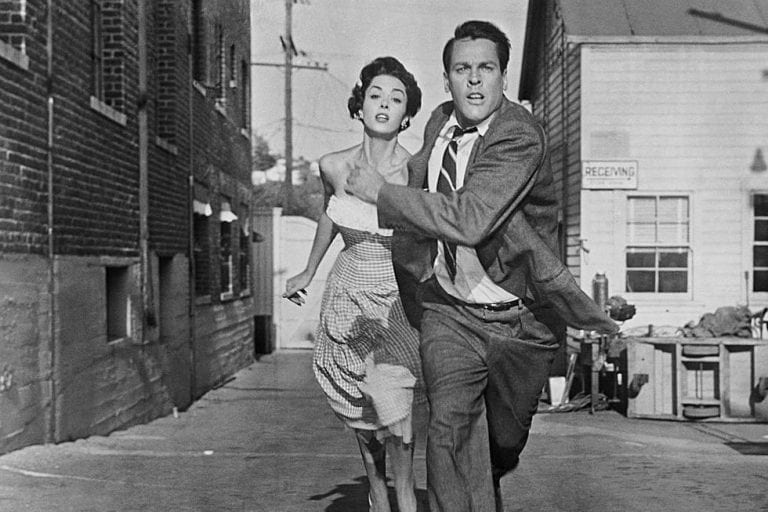 Kevin McCarthy and Dana Wynter, leads of the iconic 1956 film which, like many Hollywood films, unwittingly captured the national fear obsession with communism, a fear cynically manufactured by the elites.

Remember the famous 1956 film Invasion of the Body Snatchers? It was produced to show the American public just how terrible Communism was. The movie's  ' fear card ' was played by having the pods suck away knowledge ,along with the very essence of one's individualism... as the victim slept. Upon awakening they became apathetic , with no passion or rational thinking mechanisms... just automatons [ a moving mechanical device made in imitation of a human being].The main character in the film became almost insane with a frenetic drive to stay awake and escape his city filled with these creatures. At film's end, he does escape the town, but, as he is telling his story to the authorities, we see trucks driving down the highway filled with more and more pods.

The pods in today's Amerika have been replaced by the Kool-Aid that so many of our neighbors are drinking regularly. The schools falsely teach our young that Amerika's so called democracy is predicated on a two party system that is divided on most, if not all, key issues and ideals. We have the Republican ' right wing ' Kool- Aid and the Democratic ' phony progressive ' Kool-Aid. Our mainstream media has been drinking it for decades! All we can receive thru the boob tube, regardless of what channel, is the dribble to make us think that ' Column A ' is different from ' Column B' . This writer engages friends and acquaintances with rhetorical questions like " What's the difference between these two parties and their candidates?" The walking zombies repeat whatever clichés they have memorized from the pundits that they follow on air or in print. The right wing responses are tinged with inborn racism and America First arrogance. The phony progressive responses are always to ' Feel the pain ' of the oppressed and support any ' lesser of two evils ' to stop the right wing. And on and on it goes!

The Amerikan public has been ' dumbed down ' for  a few successive generations. Anyone under 50 has been affected by this. The newspapers that we baby boomers used to read for hard news and balanced opinion have been taken over by what Paul Craig Roberts calls the Presstitutes. You won't be able to read someone like Jimmy Breslin and Pete Hamill in a mainstream paper. You get either right wing or phony progressive columnists who do the bidding of this Military Industrial Empire. On a channel like C-Span you get a preponderance of forums and panel discussions that for 99% of the time make the public believe that our empire is democratic and our system has proper ' checks and balances'. When will you tune in and see Michel Chossudovsky, Patrice Greanville, Ray McGovern, Noam Chomsky, Chris Hedges , Dr Michael Parenti, John Pilger or Ed Curtin (to name but a few ) invited on these think tank forums? How many of our friends and neighbors even understand that, as Green Party presidential candidate Jill Stein elaborated in the 2016 campaign, over 54% of our federal taxes goes for military spending? Tell that to the folks in Flint Michigan ( home of Michael Moore, who now supports the ' lesser of two evils')  as to why there are no federal funds to help them get safer drinking water and clean, toxic free pipes.

The empire's pods have subjugated our populace into believing in this Amerikan Exceptionalism . This then allows it to get away with phony pre-emptive wars and occupations. It allows corporations to keep creating dead end jobs with bum paychecks , and union busting of whatever decent and secure work is still available. Worst of all, as mentioned above, the pods have turned many of us into either ' Good Germans ' or an unaware and uncaring pod in the consumer culture. In the old days at the health club or gym, folks would engage in discourse and debate of current affairs issues etc. Now, most of the members of these clubs walk around with their ears plugged into some electronic gadget, oblivious to anyone there. Isn't progress great? One could only imagine how George Orwell would comment if he were around today in Amerika. Just remember not to fall deep asleep at night.

Invade The Hague! Bolton vs. the ICC

The makers of the 1956 film claimed it had no specific political leaning (neither left nor right) and that it was intended as a thriller based on the horror of mass conformity. When I first saw it as an adult in the late 1960s, I took it as a critique of the fear generated by American McCarthyism. In the US, it wasn’t the “communists” who were breaking unions, wrecking careers, and silencing dissent; it was the right wing anti-communists.
But the author is correct: so many people in this country are apathetic and fearful to speak out because they’ve been misinformed by the pressitutes. But you can’t hide the truth forever. Keep writing Phil Farruggio!