Home ABOMINATIONS THE CANARY IN OUR COAL MINE

THE CANARY IN OUR COAL MINE

HELP ENLIGHTEN YOUR FELLOWS. BE SURE TO PASS THIS ON. SURVIVAL DEPENDS ON IT.
Thank you for visiting our ecoanimal defence section. Before reading our main essay, please join us in a moment of compassion and reflection.

The decision was of tremendous import and was not made quickly but it was made decisively.  Judge Dana Christensen ruled against the U.S. Fish and Wildlife Service delisting of the Yellowstone Grizzly, and stopped the trophy hunt proposed by Wyoming and Idaho, those retro redneck havens of braindead racism, industrial serfdom, and furious, moron machismo.

In shutting down this corrupt, deeply cynical piece of ecological crime on the part of the U.S. Fish and Wildlife Service targeting the Yellowstone grizzly population of 700 bears, the judge kept unerringly to existing law, and ruled narrowly to render his decision unassailable.  The key point is that, by law, no delisting action may be taken on a subpopulation of a threatened or endangered species that does not consider the effects on the species as a whole.  In other words, no action can be mandated on one population that does not include all others.

This ruling, while it does not prevent a hunt of the entire species should such a despicable act of depravity ever be mandated, does prevent the kind of fatal assault on bear viability that killing them piecemeal--as would have been the case had the Yellowstone hunt gone ahead--represents. 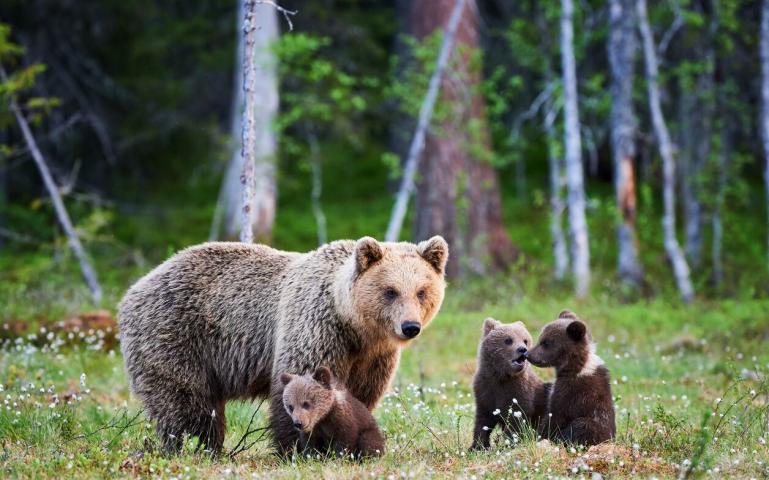 With sociopaths running the highest levels of government, and powerful, depraved lobbies pushing to continue their exploitation, the prospect for Grizzlies, and all animals, remains dim.

Because those who back this sort of blind madness are both stupid and relentless in their twisted perversity, this decision may well be appealed, and when that appeal is lost, the same lunacy may be tested in the NCDE or Cabinet-Yaak, regardless of the dead certainty that it will fail in court.  This is the kind of minds one confronts in the fight for ecological sanity.

Beyond the relief and satisfaction and, yes, sheer elation, this decision has evoked in those who care about the viability of the Griz, it is impossible to ignore the dark future that looms for this world iconic creature due directly to human inability to love and live in symbiosis with the natural world.

Far greater than the threat of human depredation on grizzlies, grim as it is, is the largely ignored imminent elimination of the habitat they must have to survive.  It’s not complicated: without vast, connected areas of truly wild country where all the fatally destructive apparatus of human organization is absent, the bear and all top predators will be swiftly driven to extinction.

This is not news.  It has been common scientific knowledge for decades.  And yet the combination of the utter corruption of our Capitalist politics with obscenely complicit sham enviro outfits known in the trade as Gang Green, has prevented passage of sane, adequate, and sufficient habitat legislation.

"Muir pointed out what native Americans knew and warned us about even as we exterminated them: that in nature all is connected, and that the objectifying of any of it, the selective slicing and dicing for profit of life that is deemed alien, inanimate and other, leads inexorably to general disaster and the extinction of all. We ignored that warning and we’re nearly there..."
Understand this: feeble gestures and token symbols, toxic nature preserves and high-traffic National Monuments in Delaware and Utah, won’t cut it.  There is one existing proposal that will provide both the wild area and the multiple connectivity that can, if implemented, save the Griz: NREPA, the Northern Rockies Ecosystem Protection Act.  Painstakingly prepared by world-class biologists and grizzly experts such as John Craighead, it has been sponsored in Congress for decades but big corporate money and boundless industrial greed have blocked and defeated it time and again.

To date, the great question in regard to the Grizzly has been how to save it.  Now, in light of ever more appalling estimates of the onrush of irreversible climate change with its catastrophic effects on our world, it is clear that the Grizzly is the canary in humanity’s coal mine, and that preserving a world in which it can exist is the only way to preserve one in which we can, as well.

Muir pointed out what native Americans knew and warned us about even as we exterminated them: that in nature all is connected, and that the objectifying of any of it, the selective slicing and dicing for profit of life that is deemed alien, inanimate and other, leads inexorably to general disaster and the extinction of all.  We ignored that warning and we’re nearly there.

So, celebrate this principled, courageous decision.  Let yourselves feel the inner warmth and depth of gratitude that comes from knowing that some of the great Griz nosing tonight into the raw, wicked, snow-whipping winds of the Yellowstone high country will survive another winter in their magnificent power that would not have seen Spring again without it.

And hold hard to the truth that what the Griz must have is what we as a species must have, too, and fight for it while you can, because there is a war raging right now, and it will determine the fate of all life on earth.

About the Author
Paul Edwards is an adversary of all forms of oppression, exploitation, and dishonesty and an advocate for human justice and ecological sanity.  He is the founder of ClassWarFilms.

LET YOUR LIFE BE A FRICTION TO STOP THE MACHINE