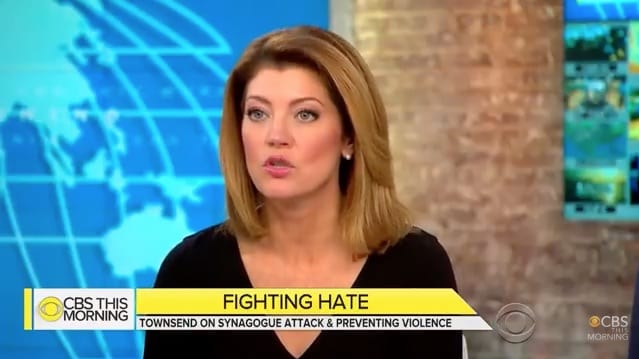 In today's CBS This Morning edition warmongering presenter Norah O'Donnell proved again that she knows little and understands nothing about politics and the crisis her country and the world are facing, in large measure on account of the forces she defends and represents. Basically, besides being not much more than a cheerleader perched on a high platform, O'Donnell incarnates the normally unchalleged stupidity of confusing radicalism with extremism, especially of the absolutely deranged variety. In part, we assume this is because no prominent "journalist" in the imperial media system can function for long being an educated independent mind, especially one questioning the underpinnings of the status quo. That, Nora O'Donnell, a proud army brat, surely is not. In fact while defaming radicals with her real or feigned ignorance, and while seeking a more severe system of censorship against dissident opinion, O'Donnell, like many of her colleagues, is an extremist herself, albeit one widely accepted in Western culture: an extremist of the center. In other words a mainstream center-right liberal. In the US she's probably a Democrat; here , in this benighted kingdom, she might easily be a Blairite or worse.

O'Donnell's assumption that radicalism is synonymous with "extremism" is simply ludicrous. By her nebulous but insidious standard she would have us believe that, for example, most doctors in the US (and elsewhere) are rabid and dangerous extremists.

Why do I say that? Because doctors —at least those who are not charlatans— are all radicals, radical diagnosticians, that is. They routinely seek the actual causes—roots—of a disease, and try to eradicate them (again, pulling up the bad roots they have discovered), thereby curing the patient. For a radical of any sort is technically no more and no less than a person who looks at the causes of a social problem, not just its symptoms. Furthermore, since most radicals are also people of principle, they just don't sit on what they find, they take action. If they find that some horrible thing in society or a human body or the environment is directly caused by XYZ, they try to enlist their fellows to eliminate such a cause. They are not afraid of doing that; they are not afraid to shake up the status quo. They have no stake in the status quo and wish for none. On the other hand, if you remain stuck on a lurid description of the symptoms, (while professing great sympathy for the victim, a lot of yada yada), but keep suggesting ineffective nostrums, you are a centrist, a liberal. That's why the best politicians for the ordinary citizen are radicals. Left radicals, let's make that clear at once, since "right-wing radicals" is a logical and practical contradiction, for ultra-conservatives are normally not in the business of looking for reasons to upset the apple cart. In their case, perhaps, the term "extremist" might be suitable, although "extremist" like all modern political terms is so loaded with exogenous deformations as to be almost useless as a eliable descriptor of action or personality. We end up, again, with the subjective when handling that normally inflammatory word; in fact, many, including myself, can think of more than a few circumstances when "extremism" might be in order.  (Just look up Barry Goldwater on this.)

Click the link below to watch the first part of the CBS discussion on "hate speech", "extremism", and "radicalism."

But let's get back to these "radicals", that agitate Ms O'Donnell so much. Unfortunately, due to vested interests who benefit from a rotten and malignant status quo, radicals are seldom given a chance to get to power, in fact the powers that be make sure their analyses are never heard or seen by the people. Sounds familiar with what'shappening with Facebook and other social media? Not to mention the older, long established mainstream media who have exercised de facto "gatekeeper" functions for generations.

Now we can see why the word "radical" has been deliberately stigmatised by those who profit from the existing status quo, being that a monarchy or a gigantic sociopathic capitalist system, When it comes to dangerous truths, verbal chicanery is in order. Not surprising then that those like O'Donnell and her ilk, who dutifully disseminate such impostures, are so richly rewarded with fame and grotesquely overpaid careers.

In this context, watch closely how Norah earns her keep.  Observe how Norah—wrapped in the vestments of "reasonable society"—that is representing you and me— automatically credits the government (in this important battle against hate speech, etc., etc.) with good intentions and basically no causality in the whole mess. It's disturbing how she wittingly or unwittingly, striking those plaintive, concerned semi-pouty poses, pushes for more censorship as a solution to something that has deep and complex roots in American culture. The whole performance is bolstered by one of her guests, namely the notoriously reactionary Fran Townsend, a "homeland security advisor" to George W. Bush. The upshot is that something that desperately needs much broader and deeper airing, a proper national debate instead of a simulacrum, is relegated by these worthies to suffocation.

That's one helluva pass, but one to be expected from professional disinformers.

About the Author
Volpone, Jr. is British physician residing in Sheffield. His grandfather worked in the city's legendary steel mills. He's a fierce supporter of Sheffield United F.C.  And no, he's not interested in migrating to America.

GREATER OF TWO EVILS: WHY THE DEMOCRATIC PARTY IS WORSE THAN THE REPUBLICAN PARTY FOR 85% OF THE U.S. POPULATION

The Cult of Trump

Very good! The conscious, deliberate conflation of the word “radical” with “extremist” helps the Ruling Class Corporate Militarists discredit anyone who seeks the root causes of societal problems. Lazy or corrupted “journalists” perpetuate this error to their own greedy advantage.

Trump and his supporters and most of the GOP are “extremists”. Most Democrats, especially the neoliberal Clinton/Obama/Pelosi/Schumer ones, are complicit in the GOP extremism. Those who know that rapacious corporate capitalism is the root of most life-threatening crises on this planet are the radicals.