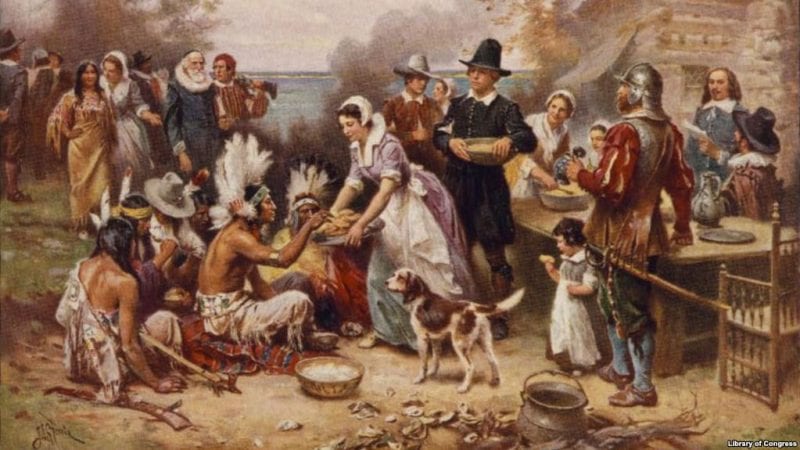 J. Leon Gerome Ferris depicted a beatific picture of celestial harmony between pilgrims and native Americans in this "First Thanksgiving". Such idealisations, part of American mythology, hid the actual horrors of this uneven relationship between conquerors and the soon-to-be conquered, and the true nature of US society. The lies about ourselves have continued to this day, now ensuring our enslavement to the super-rich.

Yes, we need to finally absolve ourselves, as Amerikans, from the con job concerning Thanksgiving Day. All the 'pomp and circumstance' revolving around this holiday is just that, to quote Ebenezer Scrooge (one month early) : Humbug!  Of course, even the southern Colonial slaves and Northern ' indentured servants' of that era would be thankful to just have a roof over their heads and enough to eat each day. Yet, it was only the slave masters and owners of property and capital who could kneel in their churches or bow in reflected prayer at their lavish dinner tables in true thanksgiving.

Amerika 2018 comprises well over 100 million of our citizens who are lucky just to stay head above water financially... perhaps a few paychecks from being out on the street... literally! How many families who live next door to me and to YOU ( or maybe YOU yourself the reader ) who have to have two ( or more?)  wage earners full time to just be able to function? How many single parents of even just one child need to live with their parents ( if lucky to be able to) in order to function properly?  What about a single mom all on her own? Do the math: How can a single Mom with let us say just one child, who works a blue or even white collar full time job on one salary, be able to stay head above water on let us say the USA median salary for a woman ( $ 39,900)? She most likely pays rent, and in my area of North Central Florida even a small two bedroom apt. goes for on average  $ 1200 a month in a somewhat ' safe' low crime neighborhood. With her take home pay of $ 725 plus her health insurance contribution ( usually 50% ) of $ 80 a week, the figure is now $ 645. She would most likely need a car to get around ( my area is mostly ' car driven' with not the greatest mass transit ) and let us say that for even a low end car her payments would be $ 225 monthly for a new car loan, bringing her take home figure to now $ 420. Factor in her car insurance of $ 100 a month, and her take home figure is now $ 320 a week. She and her child need some sort of cable television, and even the low end cable is going to be at least $ 50 a month... and her take home figure is now $ 270 a week. Her phone/internet cost, even at the low end, would have to be at least $ 80 a month, bringing her figure down to $ 190 a week. Then you have food costs for her and her child, clothing costs, gas for her car, and God forbid one of them gets sick, or needs dental work, which is not covered.... 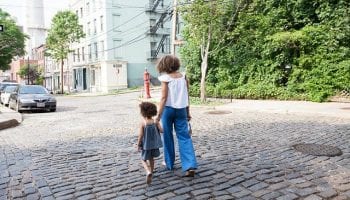 The CEOs of all the companies that this single mom pays her hard earned money to earn (on average) in excess of a minimum of $ 20 million a year. Some earn double ad even triple that figure! Within their own companies these CEOs earn in excess of 300 times the pay of their average workers, while a significant proportion of top Fortune 500 firms—especially in the financial sector (which includes insurance)— get compensation packages thousands of times larger than their regular employes.

These folks have lots to be thankful of next Thursday! But mind you: Where is the outrage? Where is the outcry of millions of working stiffs to say ' Something is wrong here!?'

This column is just about one tiny example of the unfairness of this current corporate/ capitalist system. Those CEOS and top execs  of Amerikan capitalism, who are even much less than what many label The ONE PERCENT, are paying federal taxes of a top rate of 37%.  Now that is before their accountants cut it down to much lower figure than that. Mitt Romney, now a Senator from Utah, admitted a few years ago that he, as a mega mega millionaire, only paid at a rate of perhaps 15%. Please remember that when JFK was president, in 1961, the top tax bracket was at 90%. Again, with a good accountant, those mega rich may have paid at a rate of maybe 50%. Yet, my late uncle, who was in the 81% bracket then, earning $ 140k a year, still was able to enjoy  two brand new twin Cadillacs for he and my aunt, his exclusive country club membership and a new home in the burbs.

Folks, for this Thanksgiving it is time for we hundreds of millions of working stiffs to begin to accept the need for Socialism. It may just be the only way for our great nation to turn the corner economically and morally. Reread some of the scriptures, for all of you who adhere ( as this writer does) to the teachings of Jesus, and see what he said about the mega rich: Again I tell you, it is easier for a camel to pass through the eye of a needle than for a rich man to enter the kingdom of God.”

Fact-Checking the Establishment’s “Fact-Checkers” : How the “fake news” story is fake news