"...nearly two-thirds of French youth want to join a “mass uprising” against the existing order." 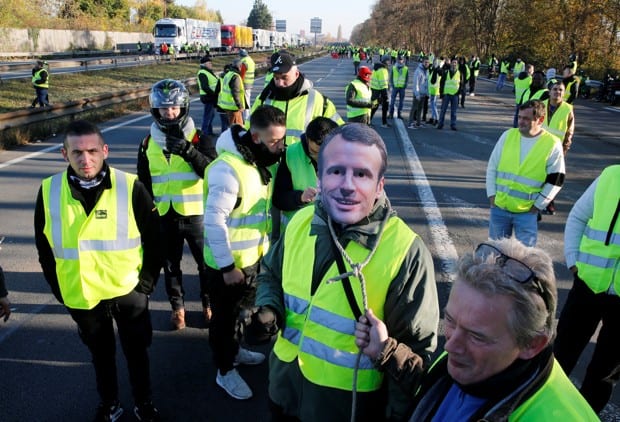 A photo distributed by Reuters depicts a man wearing a mask with the likeness of French president Emmanuel Macron as people take part in the nationwide yellow vests demonstrations, a symbol of a French drivers' protest against higher fuel prices. (Despite their corporate parentage, AP and Reuters covered this event far more efficiently and impartially than the regular media.)

[dropcap]Y[/dropcap]esterday, after hundreds of thousands of people across France donned yellow vests and blockaded roads and intersections to oppose President Emmanuel Macron’s fuel tax hike and his social attacks on working people, the French government announced the return to universal military service. In an interview yesterday with Le Parisien, Junior Minister for Youth Gabriel Attal, who is presenting the bill, said: “My objective is to have the first draftees as early as June” of 2019.

The timing of this announcement underscored the close link between the ruling elite’s attempts to put entire generations of youth under military discipline, and its attempts to suppress social anger that is erupting among youth and workers in France and across Europe.

As it announced the return to the draft, the government was threatening a new, violent police crackdown against continuing “Yellow Vest” protesters’ blockades Monday. Some 27,000 protesters were involved, blockading highways in the northeast and near the western coast of France, as well as strategic Total oil refineries in the south.

The timing of this announcement underscored the close link between the ruling elite’s attempts to put entire generations of youth under military discipline, and its attempts to suppress social anger that is erupting among youth and workers in France and across Europe. As it announced the return to the draft, the government was threatening a new, violent police crackdown against continuing “Yellow Vest” protesters’ blockades Monday. Some 27,000 protesters were involved, blockading highways in the northeast and near the western coast of France, as well as strategic Total oil refineries in the south.

With 183 protesters still in preventive detention after a heavy police crackdown on the weekend’s protests, Interior Minister Christophe Castaner threatened that Yellow Vest protesters would be “thrown out systematically, methodically” from their blockades during the week.

“Deblockading operations will continue in the coming hours,” he announced last night, adding that he had asked police authorities to be ready to “liberate fuel depots and other sensitive sites.” He said, “Freedom of expression and of protest is a fundamental right. But this liberty does not allow for lasting interference with freedom of movement or with commercial and economic life. I ask solemnly, but firmly, that those who want to demonstrate to continue demonstrating if they want, but without trying to create blockages and attack the liberty of others.” 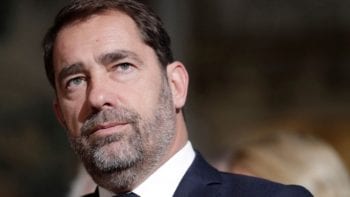 With calls spreading on social media for a march on the Elysée presidential palace and for renewed mass blockading actions this coming weekend, the government is clearly planning for a major police crackdown against growing social opposition.

The Macron government’s return to the draft, after France abolished it in 1997, is part of a broad move across Europe to incite militarism and prepare for war. In 2017, Sweden re-established the draft as part of preparations for war with Russia, citing “Russia’s annexation of Crimea, the conflict in Ukraine and the increased military activity in our neighborhood” as pretexts for the move. In 2016, German authorities announced that they were also considering reinstating the draft.

In France, Macron pledged to bring back the draft in a 2017 presidential campaign speech in which he declared: “We have entered an epoch in international relations where war is again a possible outcome of politics.” Beyond building infrastructure for a return to the draft if and when it is needed, however, its central purpose is to stoke nationalism and militarism, and shift the political atmosphere to the right.

Now, Attal declared in a long set of feature articles about the draft published by Le Parisien, France will draft “several hundred or even several thousand people” next year, as a prelude to a program where men and women would be recruited before their final year in high school to do a month of military service. Attal said a possible target date is “2026, but we are studying faster possibilities.” He added, “Universal national service must reinforce the links between the army and the nation.”

The paper explained, “Every year, around 800,000 boys and girls of the same age will be called up for a month, including 15 days when they will live collectively.” They will then have the option of signing up for three more months of military service, and then possible recruitment into the armed forces.

The government’s attempts to give a fraudulent democratic gloss to its plans, and to deny their link to plans for military action or domestic repression, are shot through with crying contradictions. Attal claimed that “France no longer needs to have an entire generation trained to handle weapons.” He claimed the draft would allow for “mixing social classes on the basis of the values of our Republic”—echoing, oddly, the purpose assigned by the state to the public school system.

Academics interviewed by Le Parisien contested whether military service did this before its abolition in 1997. As youth entering the program were allowed to choose between various types of military and civil service, historian Bénédicte Chéron said, “Social mixing gradually ceased, and in 1997 you only had young men from the poorest social classes in the land army’s combat units.”

Plans to bring back the draft, Le Parisien admitted, are highly unpopular among the youth, who have a “confused and rather negative view” of Macron’s plans. This leads, the paper added, to “a feeling that the program is useless” that is widely held among French youth. It cynically recommended that Macron seek to market the draft by playing up claims that time spent in military service would help youth learn more about “reacting in crisis situations” and about “activities linked to the environment and sustainable development.”

In fact, the purpose of restoring the draft is not to protect capitalist democracy by allowing young workers, middle class youth and scions of the financial aristocracy to rub shoulders in the barracks. Its aim is to impose military discipline on the youth to forcibly suppress social conflict, so that Macron can continue imposing his unpopular wars and austerity policies. Macron’s return to the draft is a particularly striking illustration of how the bourgeoisie’s attempt to limit class conflict at home leads to militarism and the rise of the war danger internationally.

The ruling elite sees the suppression of class conflict among the youth as particularly critical after the European Union’s 2017 “Generation What” poll, which found that over half of European youth and nearly two-thirds of French youth want to join a “mass uprising” against the existing order.

Le Parisien all but admitted this in its editorial, titled “A moment to come together,” writing: “At a time when France is torn apart by divisions that threaten its unity, the idea of putting back in place a national service program seems to be a timely initiative.”

Macron underscored the militaristic character of this policy with his trip to Berlin this weekend during the Yellow Vest protests, during which he echoed his earlier calls to build a European army capable of confronting Russia, China and the United States. French officials at the Munich Security Conference earlier this year estimated that France would spend €300 billion by 2023 on the military buildup needed to realize Macron’s plans.

This weekend, Macron called for a “stronger and more sovereign Europe” that would not “become the plaything of other powers” and, referring to Franco-German collaboration on a European army, declared: “The new Franco-German responsibility consists of giving Europe the tools it needs to reach sovereignty.”

The fire in Paradise, California: From natural disaster to social catastrophe

France is restoring conscription of cannon fodder to protect the oligarchs and plutocrats from ….. well, everything! When the conscript ranks are swollen to an excess, the spares will be sent off to far lands to kill brown and black skin people on behalf of the aforementioned oligarchs and plutocrats, including Macron. Advise to the brothers and sisters refusing to be conscripted and fighting for justice: This is not the French Revolution. The new Louie XIV will kill you in a heart beat on behalf of his Masters.

Wow, if France’s undeclared and un-covered wars were to be fought by a conscript army, they would be completely unpopular and be ended very quickly!