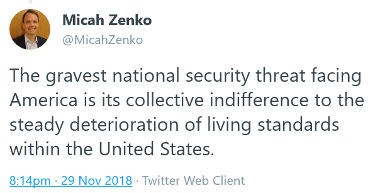 Micah Zenko, previously at the Council on Foreign Relations and now at Chatham House, is one of the sane analysts of U.S. security policies.

His tweet was in response to the 2017 CDC report on mortality in the United States. Its key findings include:

Last year was the third year in a row that life expectancy in the United States decreased and mortality increased.

This only happened once before between 1915 to 1918. The cause was the Spanish Flu, which alone killed 675,000 people in the United States, and the 1st World War. That drop in life expectancy was extremely sharp but so was the rise that followed when the epidemic and war were over. The current phenomenon is different. 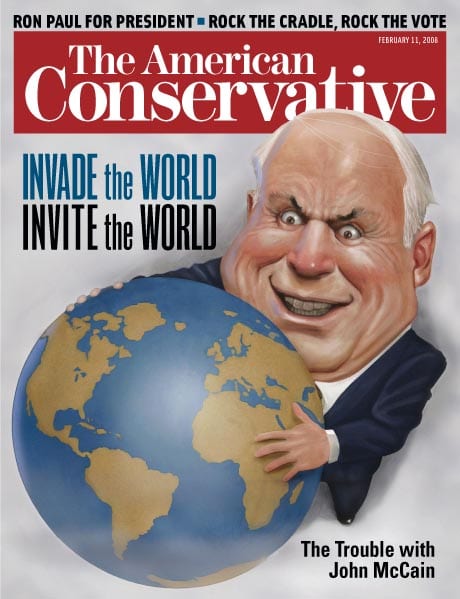 An unexpected cover on American Conservative featuring pathological warmonger John McCain. The magazine also carries a large number of pieces which many genuine progressives could agree with, as opposed to the repulsive imperialist offal seen in most liberal media. Are we witnessing a shift among some conservatives?

For a '1st world' country like the U.S. one would expect that life expectancy increases each year because of scientific progress in medicine, a cleaner environment, a reduction of accidents and the absence of large epidemics and war. An increase is what we see in other developed countries. It is only the U.S. that experiences such a decline and that fall does not come from a high level. In the 2015 WHO and UN lists of life expectancy by country the U.S. ranks as number 31 and 43. The new data will likely take it even lower.

The main causes of the current decline are an increase in overdoses from opioids and a higher suicide rates:

It is not only life expectancy that shows the U.S. as a-not-so healthy country. Maternal and infant mortality also increased during the last decade and are much higher than in other developed countries. All these social indicators describe a society in decline.

Absent of war the only other industrialized country which experienced a long drop in such social indicators was Russia in the early 1990s.

In 1976 Emmanuel Todd, a French anthropologist and demographer, predicted the fall of the Soviet Union, based on indicators such as increasing infant mortality rates. In 2001 Todd wrote After the Empire: The Breakdown of the American Order in which he analyzed similar trends in the United States and predicted its fall as the sole superpower:

Todd notes some disturbing American trends, such as rising stratification based on educational credentials, and the "obsolescence of unreformable political institutions." Increasingly, the rest of the world is producing so that America can consume.

Todd will surely see the U.S. current health statistics as a confirmation that the fall of the empire is near.

That is the reason why Micah Zenko calls the political indifference to social health "the gravest national security threat".

It was Bill Clinton's 'welfare reform' that systematically impoverished people. The current opioid crises developed under the Obama administration and it did nothing to stop it. Obama 'reform' of the health insurance system shunned the 'public option' which would have given insurance to anyone who can not afford the commercial offers. With many Democrats firmly in the hands of big pharma there is little hope that change will come from their side.

But if the social decline of the United States is viewed in terms of 'national security' then conservatives may start to push the issue.

A sign that this indeed might happen is a piece in the hardcore conservative National Review which recognizes that the decline of life expectancy and the opiate crisis require fundamental policy changes:

One group of well-meaning conservatives believes that taking our eye off the economic-growth ball will lead to ever-more stagnation, while others (like [Oren] Cass) believe we need to create an economy in which more individuals have the chance to be productive, even if that comes at the cost of some GDP growth.
...
Does more robust funding of, say, worker-training programs seem to be the ticket to address the kind of existential angst evidenced by the slide into opioid abuse? Should we expect the induced labor-supply growth from the Tax Cuts and Jobs Act to counteract the emptiness met by a bottle or pill jar? Is moralizing about civic society sufficient to rebuild a frayed social fabric that leaves too many isolated and alone?Alone, none of these is sufficient, but the conversation Cass and others have started seems like a step toward responding to the challenge.

I do not agree with the piece or the Oren Cass book about the American worker, but find it refreshing that U.S. conservatives finally start to see the problems their policies cause and consider changes even with regards to their fixation on growth at all costs. It is the first step on a long road to better social and economic policies.

But will the institutionalized corruption of Congress, what Todd calls the "obsolescence of unreformable political institutions", allow for any change?

Documenting Israel To Be a Fascist Nation

The post-Stalin/Beria – there were 2 coup d’états in the Soviet Union in 1953 – i.e. post Marxist-Leninist Soviet Union was at the very top run by anti-Communists aligned with the West. (these are well-known facts, in for instance East Germany)
They’ve been wilfully subverting, sabotaging both the USSR and the US (West) since that time until Obama, because they though they’d pretty much won and surely would win, and wanted to weaken the resistance against them from within.

Except they didn’t win, e.g. Xi’s China, Iran, Putin’s Russia. But they do need a base, a war machine and cannon fodder.

Well, that’s why it is most likely that Trump is in fact the ‘elites’ (i.e. RotSchild-RoggenFeder & Co.) first choice. The ‘elites’ know that they have no credibility with most American people, so in order to promote half-baked Hitler Trump, they’d have to demonize him. Well, that’s exactly what they’ve been doing, extremely so. (Never mind that theatre)