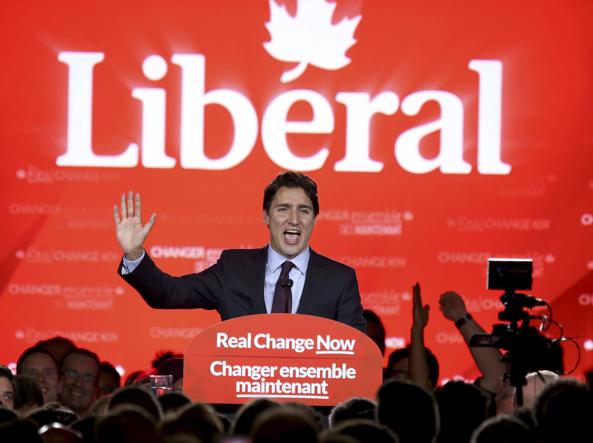 Empty-brained liberal Justin Trudeau, promptly talking like a corporate liberal and embracing Washington’s imperial lead made clear that his victory was no victory for “Canada’s left”.

[dropcap]C[/dropcap]anada’s Prime Minister Justin Trudeau, who declared “sunny ways” were back after the last election, continues to waffle on what is to be done about the Khashoggi killing in Turkey by the Saudi Arabians. The problem is being “investigated” and more consultation is to be held. The real problem as presented by CBC news tonight (Monday, November 12, 2018) is the combination of possible loss of jobs in London, Ontario, and the large penalty stated to be one billion dollars for an abrogation of the contract to sell hundreds of armoured vehicles to Saudi Arabia. The sales contract is “secret” and thus most of the details will never be known, other than the cost of $15 billion (Canadian) and the penalty. .

The CBC had some of their usual pundits expressing their opinions on the subject. Charles Adler, a strong right wing advocate came out strongly on the moral case, indicating that regardless of the state of the contract to sell many hundreds of weapons to the Saudis, Canada should simply say no deal.

Opposing that moral view, pundit Tim Powers presented the argument, “it’s about business and politics.” Yes, it certainly is, as Trudeau waffles and Conservative opposition leader Andrew Scheer dodges the question (it was a Harper Conservative deal finalized in 2014). Powers big question does not even consider Yemen, as he wonders “who would be punished here?” in reference to the supposed 3 thousand jobs at stake in London, Ontario. He reiterates later, “Why should we punish the people of London, Ontario?”

Those poor people of London, Ontario, for whom life will go on, work will continue as the contracting company is not just producing for this one sale. Sure wouldn’t want to stop killing Yemen citizens in order to protect Canadian workers who are in little if any danger from anything.

Seeing as how Mr. Powers is so concerned about money and job losses, perhaps we need to see the contract through another perspective. Deaths in Yemen were officially 10 thousand two years ago, and the fighting has only become more violent, with more deaths from disease and starvation. The final tally could easily be 100 thousand deaths – and current deaths are estimated as high as 150 thousand so that figure is within easy reach. If we apply the one billion penalty Canada must pay for cancelling the contract, it works out that each Yemeni death is worth $10,000 in order to maintain the contract.

So what will it be Canada? Taking the correct moral stance as indicated by Charles Adler, or should we avoid the penalty and kill more Yemenis in order to save $10,000 a head? Although putting a price on each head for the cancellation of the sale is rather crass, it is even more brutal to think Canada is reaping a war crimes profit of $14.7 billion dollars in order to support Saudi killing in Yemen. At that price, we will have earned $150 thousand per Yemeni head, plus the 10 thousand for not abrogating the deal, for a total head toll of $160 thousand – pretty good hunting, eh?

Jim Miles
im Miles is a Canadian educator living in British Columbia. He writes regularly about the Middle East and its militarization and economic subjugation. His concerns include the commodification of the world by corporate governance and the American government. He writes book reviews and opinion pieces which are published here, as well as in The Palestine Chronicle and Foreign Policy Journal. His work is widely distributed across the Internet.”
All comments subject to anti-hacking filters.
8
8
Shares
0 comment 0 FacebookTwitterPinterestLinkedinVKRedditWhatsappTelegramEmail
previous post