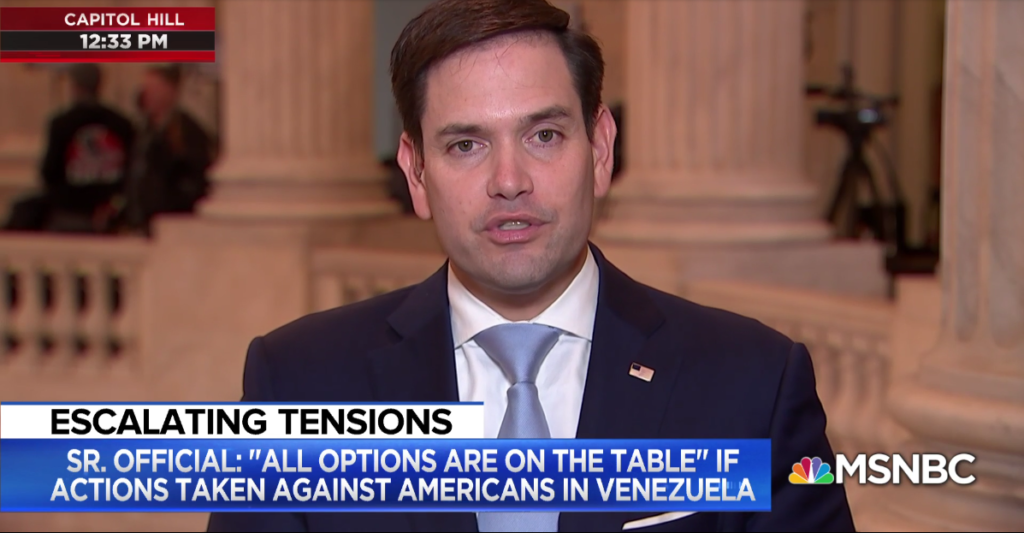 [dropcap]A[/dropcap]fter much behind the scenes angling and plotting, the Trump administration is now waging an overt campaign to overthrow the government of Venezuela—coordinating directly with the Venezuelan military, lobbying other countries to support the opposition government-in-waiting, threatening a military invasion and engaging in aggressive PR stunts under the guise of “aid.” 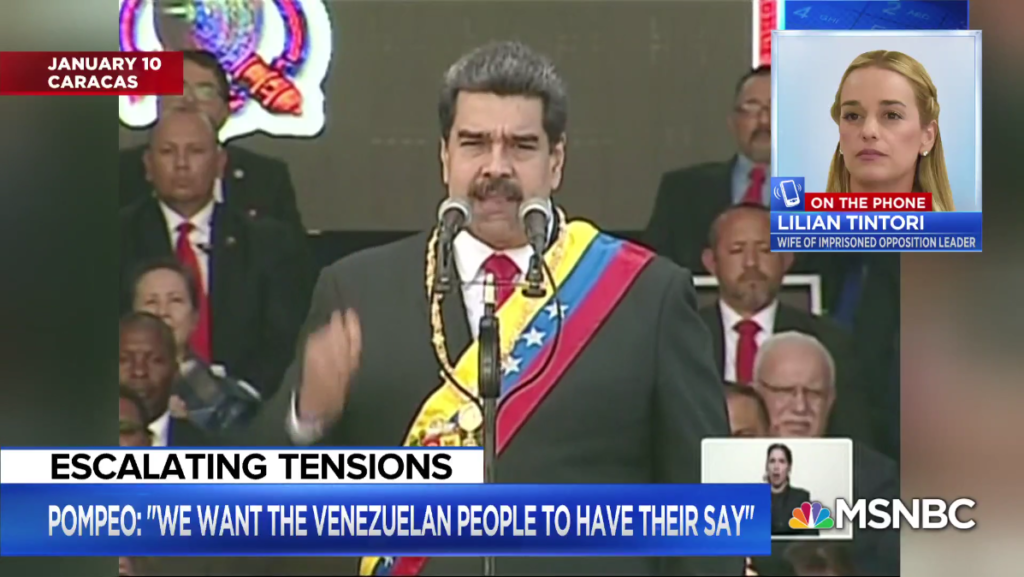 Given MSNBC is the largest, most influential liberal platform in the US—one that has long marketed itself as a progressive counter to the lies and ruthless right-wing onslaught of the Trump government, one would think they’d be leading the charge against Trump’s old school, Cold War–style coup-mongering in South America.

But a FAIR survey of MSNBC since Trump threw the US’s support behind self-proclaimed Venezuelan president Juan Guaidó (the effective start of the attempted coup) finds coverage has ranged from outright support to virtual silence—with only one five-minute segment on All In With Chris Hayes (1/29/19) broaching objections to Trump’s Venezuela policy. The only segment that comes close to criticizing Trump’s attempted coup, Hayes’ “Is Trump Moving Toward War in Venezuela?” largely framed his opposition as “just asking questions,” and had on Texas Rep. Joaquin Castro to insist the “timing” for sanctions and regime change wasn’t right.

Based on a search of MSNBC’s website, these were the only five of the cable channel’s 30,240 on-air minutes since Trump’s coup was launched three weeks ago that were dedicated to criticizing it, and these did so only mildly.

Aside from Hayes’ brief chiding, primetime coverage of Trump’s coup on MSNBC has been entirely nonexistent: Searching turned up nothing about Venezuela in recent weeks on Hardball With Chris Matthews, the Rachel Maddow Show, Last Word With Lawrence O’Donnell or 11th Hour With Brian Williams. The vast bulk of the coverage, such that it is, has been during the daytime, and has been largely fluffy, pro-regime change propaganda:

Softball interview with Sen. Marco Rubio, the leading congressional coup proponent. propping up all the primary arguments for the coup. The segment leads with “hundreds of thousands of Venezuelans are taking to the streets…demanding freedom,” and refers repeatedly to “authoritarian leftist, authoritarian socialist president” Maduro.

Not a full segment, but MSNBC go-to Venezuela expert Mariana Atencio promotes all of Trump’s core arguments for the coup.

BREAKING: US officials announce that the US has hit Venezuela’s state-owned oil company with sanctions, diverting "any purchases of Venezuelan oil by US entities" into blocked accounts effective immediately. https://t.co/XByufHogmB pic.twitter.com/1R9MqS5hqc 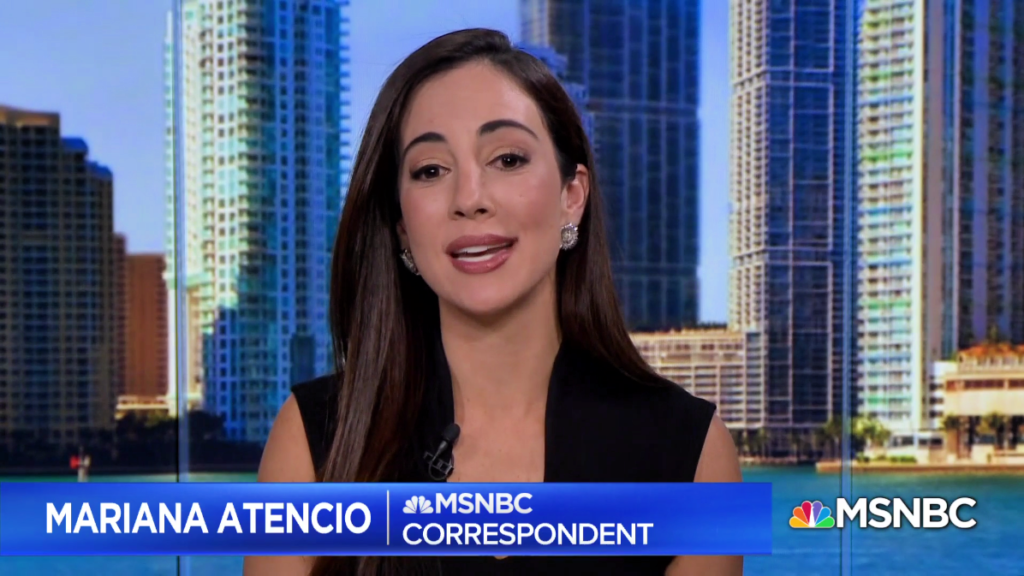 Jackson leads with Mariana Atencio—using her personal background to lend gravitas to her one-sided pro-Guaido analysis: “This is a battle right now between legitimacy and power. Guaidó has the legitimacy, but Maduro has the guns, meaning the power.”

“Mariana, we are so thrilled to have you on,” Jackson began; “You’re a native of Venezuela.”

But if Atencio’s background is brought up to present her as the voice of the Venezuelan people, why not mention her deeply atypical class status? A 2012 ABC profile of Atencio suggests she is far from representative of the average Venezuelan:

Besides the typical Disney trip that many Latin American families venture to, [Atencio] had not spent much time in the States before attending tennis summer camp at age seven. That’s when her father sent Mariana and her siblings to Camp Lincoln and Camp Hubert Tennis Camp in Brainerd, Minnesota, for four consecutive years. “It seemed like the end of the world,” she says, with a laugh.

The rest of the article was a gallery of Atencio’s favorite shoes.

Pro-coup agitprop as Atencio reports from a pro-Guaidó rally in Doral, Florida. MSNBC is apparently still unable to find a Venezuelan to report or provide analysis who isn’t an Ivy League–educated tennis camp alum married to a real estate entrepreneur.

This has been the extent of MSNBC’s coverage of Trump’s attempted coup, carried out in broad daylight by a murderers’ row of hardcore right-wing Cold Warriors: five minutes of hand-wringing from Chris Hayes, total silence from all the other primetime personalities, and daytime reporting that echos Trump and Rubio’s uniform praise for the coup attempt and its primary actors.

Just as the New York Times has long stood behind the US’s history of coups, MSNBC is following the tradition of Democratic Party–aligned media who are happy to oppose Trump when it comes to mean words and Russiagate, but fall in lockstep with his White House the second he begins to carry out Washington’s bipartisan regime-change agenda.

ACTION ALERT: Please contact MSNBC to urge the network to balance its pro-coup coverage of Venezuela.

Editor's Note: We are not entirely in sync with FAIR's oh-too-polite recommendation, although we see the wisdom in approaching these media criminals with some degree of "manners". For starters we doubt that systemic callous disinformers are going to suddenly stop doing what they are doing just because someone sends a letter asking them to do so, or tugging at their conscience, which is for starters very feeble or nonexistent, and besides we are really addressing a whole system, a whole mob of front people doing the bidding for another hidden but still very large class of puppetmasters, the global, supranational ruling class, not just a few individual humans. Even if many people send letters like that they will hardly cause a wrinkle in the machine's march toward perdition for all. The imperialist line is not a line to be negotiated with the hoi polloi, nor subject to sentimentality or reason. These people understand only real and immediate power. Everything else they are inured to.
About the Author
Adam Johnson is a contributing analyst for FAIR.org.