Home ABOMINATIONS It’s Not Just Trump and the Republicans

It’s Not Just Trump and the Republicans 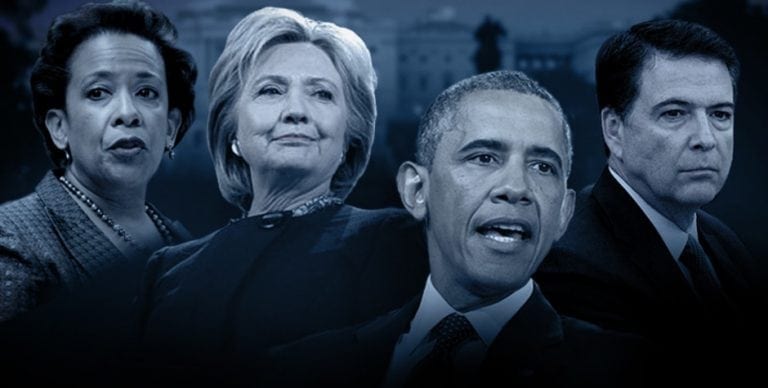 Agents and upholders of American "democracy." Or agents of something else, far more sinister, literally unspeakable?

There is a lot of talk lately in the liberal media about how President Trump and his Neocon advisors John Bolton (National Security Advisor) and Mike Pompeo (Secretary of State) along with his acting Defense Secretary Patrick Shanahan, are moving the country and the world dangerously closer to a catastrophic global nuclear war with the administration decision to terminate the Reagan-era treaty banning intermediate range nuclear missiles.

It is true that the Intermediate Range Nuclear Forces (INF) Treaty, concluded by President Ronald Reagan and Russian President Mikhail Gorbachev in 1987, did greatly reduce the chances of nuclear war by removing US missiles from Europe and Asia that had the ability to strike the Soviet Union in minutes. It’s also true that with the INF gone, Russia will, as it is already doing, inevitably develop countermeasures, such as designing and deploying fleets of quick-launch, virtually unstoppable hypersonic cruise missiles that could head towards the US before attacked, assuring the destruction of the United States in response to any first strike. (Russian or Chinese hyperspeed cruise missiles that travel perhaps 6000 mph, pose no first strike threat unless based along the US border, as they give  the US plenty of time to launch a counterattack–probably the reason the US never put much effort into developing them.)

What is not true is the notion that it is just Trump who has pushed the nuclear doomsday clock closer to midnight.

President Obama advanced that clock’s minute hand more than Trump back in 2014 — and set the stage for a termination of the INF — with his deceptive and outrageously costly program to “refurbish and upgrade” the US nuclear arsenal.

Continued by President Trump, Nobel Peace Laureate Obama’s 10-year, $1.3-trillion program began moving the country in entirely the wrong direction two full years before Trump’s election, expanding instead of reducing the US nuclear stockpile. As nuclear strategists both here and abroad instantly understood, the new US program actually represents an abandonment of the Mutually Assured Destruction stand-off which, by making nuclear war unthinkable, has successfully prevented any nuclear bombs from again being used in war for 74 years. Instead, the new US nuclear program moves this country towards a policy of making the use of nukes “thinkable.”

What Obama did, specifically, was to approve the development of the B61-12, a “small” nuclear bomb that can have its power dialed up or down anywhere from 0.3 kilotons to 50 kilotons, with the largest setting being an explosion some 3-4 times more powerful than the bombs that destroyed Hiroshima and Nagasaki at the end of World War II.

While the new bomb was given the same appellation as a US weapon first produced in 1968, which itself was a version of a bomb called the TX-61 first deployed in 1963, and while it has a hyphenated number 12 placed after the B61 to suggest it is simply the 12th iteration of the weapon, knowledgeable nuclear weapons critics say it’s actually a new weapon, and that the name given to it is consciously intended to deceive us. We Americans, after all, have never favored nuclear war-fighting. We have never favored being the initiator of wars, either (that’s why many feel President Roosevelt allowed the Japanese to attack Pearl Harbor — because he couldn’t get majority support for the US just joining the war against Germany unless it was in response to an attack).

Not only that, but the new B61-12 is being designed by Boeing (Pentagon acting Secretary Shanahan’s old employer) specifically for use in the Block 4 version of the F-35, which makes it all the more dangerous. That is because while the F-35 is properly being branded by its critics as a “flying turkey” because of the many problems with its cost, its glitch-plagued avionics and even the durability of its airframe, it is good at one thing, and that is the stealth technology that allows it to avoid radar detection. (The B61-12 is designed to fit inside the fuselage of the Block 4 version of the F-35, not under the wings like the old B61 bombs carried by the F-16 and other nuclear-capable fighter planes, since carrying the weapon externally defeats the stealth feature of the F-35,  making it a sitting duck for Russian or Chinese anti-aircraft missiles.)

The F-35’s stealth feature, combined with its ability to deliver the B61-12 bomb, makes the combination of plane and nuke, in the words of military experts familiar with nuclear strategy, a “first strike” weapon — one that could be used to initiate a devastating war on an enemy.

The B61-12 with its dial-able explosive power, also represents a step towards nuclear war for another reason: In the minds of the crazy bastards (among whom I would include both Obama and Trump) who develop and approve  nuclear war strategy in the White House and the Pentagon, it renders America’s nuclear weapons useable and nuclear war “thinkable.” The theory behind smaller bombs is that the US, which has not got a good track record at winning wars fought by soldiers on the ground, at least since World War II, could fare better if it could introduce nuclear weapons to a conflict, presumably by doing some limited damage and forcing the opponent to rethink any notion of continuing to fight.

This kind of crazy and immoral thinking goes by the name of “coercive diplomacy,” a term coined by the Harvard professor and nuclear strategy theorist Thomas C. Schelling. First developed in the mid-1960s, Schelling’s lunatic theory is now being resurrected thanks to Presidents Obama and Trump and psycho national “security” advisors like Bolton and Pompeo.

As Trump is widely quoted as having asked his national security team, “Why do we have nukes if we can’t use them?”

In quoting him, most US pundits have mocked the notion, but the truth is, the US (which has never renounced a nuclear first strike and never promised not to use nukes against a non-nuclear adversary) is in the process of building a weapons system — the F-35 and its nuclear payload, the B61-12 — that is premised on the idea of using nuclear weapons — either for “coercive diplomacy” or for a first strike.

As it was explained to me, there is no way that the F-35 is a defensive airplane. In defending the US against foreign bomber attack, what is called for is a fast, highly maneuverable jet capable of carrying plenty of anti-aircraft armament.  That would be the F-16 and other high-performance planes already available and proven. It doesn’t need stealth features like we see with the F-35 and F-22 which merely interfere  with performance, but do help with sneak attacks.

Most Americans believe, mistakenly, that the US, like Russia and China, has always vowed not to use nuclear weapons first, but only in retaliation. The reality is the US government not only has never renounced initiating nuclear war.  As Michio Kaku and Daniel Axelrod documented in their excellent book To Win a Nuclear War, and as Daniel Ellsberg more recently documented covering a later period in his book The Doomsday Machine, the US has repeatedly come close to launching, and has even more often threatened to launch a nuclear war. It has also at staggering cost for years sought to develop advanced offensive and defensive weapons that would enable it to launch such a war while suffering “only acceptable losses” of Americans (at one point that number was considered to be 20 million men, women and children).  Only the inability to assure that retaliatory losses would not be greater has prevented those criminal attacks, which, with combined deaths well in excess of 100 million, would have made Hitler’s crimes look minor in comparison.

Think about that the next time you pay your taxes, a sizable percentage of which will be going towards funding the $1.5-trillion F-35 and the $1.3-trillion “refurbishment” of the US nuclear arsenal, including the development and production of the profoundly dangerous B61-12 nuclear bomb.

Think too about the reality that it is not just Donald Trump, and not just Republicans, who are aggressively pursuing the insane idea of preparing for a “winnable” nuclear war. It’s our last “hope and change” president, Barack Obama, and the Democratic Party too, that have been and are behind this criminal insanity.

The Siege of Venezuela and The Travails of Empire