A lively and spirited rally was held yesterday outside the Ecuadorean embassy in London, called by the Julian Assange Defence Committee and supported by the Socialist Equality Party and World Socialist Web Site.

Those gathered demanded freedom for WikiLeaks founder Julian Assange and US whistle-blower Chelsea Manning. The rally followed successful events held in Assange’s home country over the last week by the Socialist Equality Party in Australia. The first was held in Sydney on March 3 and the second in Melbourne on March 10.

Among the speakers in London was SEP national secretary Chris Marsden.

Chris Marsden's speech to the vigil

George Galloway, the former Labour MP who was expelled by Tony Blair for opposing the Iraq War, also spoke to reiterate his support for Assange’s release.

Many held placards with slogans including, “Free Julian Assange!” Defend Free Speech!” “No to Internet censorship,” “USA—Hands Off Assange!” “USA Free Chelsea Manning!” “No US Extradition” and “Assange’s Freedom is our Freedom.” Protesters chanted “Free, Free, Free Assange!” and “Hands off Assange!”

The Melbourne and London events were held after the jailing of Chelsea Manning, who has heroically refused on principle to answer any questions before a secret grand jury investigating WikiLeaks and Assange.

Opening the rally was Emmy Butlin of the Julian Assange Defence Committee, who have been protesting outside the embassy since Assange was forced to take refuge there in 2012. She said, “On February 5, it was three years since the United Nations Working Group on Arbitrary Detention published their ruling in Assange’s favour, demanding he is released and compensated. Despite this clear direct ruling, the UK has refused to fulfil its international obligations, and as a result on February 23 Julian Assange completed 3,000 days of arbitrary detention.”

“Jeremy Corbyn did the same as soon as he was elected Labour leader and maintains his silence to this day. He has done nothing to challenge the plot against Assange or any assault on democratic freedoms by the state apparatus. And he would not do so, even if he formed a government.”
In relation to Chelsea Manning’s jailing, she said, “We honour the courageous principled stance she has consistently kept. We take forward solidarity for Chelsea’s resistance, as we did before, with banners, posters and flyers and marching at the forthcoming London Pride [festival]. Please support Chelsea by donating to her legal defence fund.”

Butlin noted: “Earlier today in Australia, a rally in Melbourne, organised by the Socialist Equality Party, demanded that the Australian government take immediate action to secure the freedom of WikiLeaks founder and Australian citizen, Julian Assange.”

To enthusiastic applause, she continued, “We cannot stand by and witness his ordeal unmoved. … We are grateful for the rallies in Australia and inspired by them.”

Marsden thanked the organisers of the rally and explained the great accomplishments of Assange and WikiLeaks, noting that they had made public “The ‘Collateral Murder’ video showing US forces gunning down Iraqis suspected of being militants and killing two journalists in the process; the routine killing of civilians in that conflict; the existence of US death squads in Afghanistan; what really happens in Guantanamo Bay; spying and black ops by the US around the world—against enemies and allies alike.” 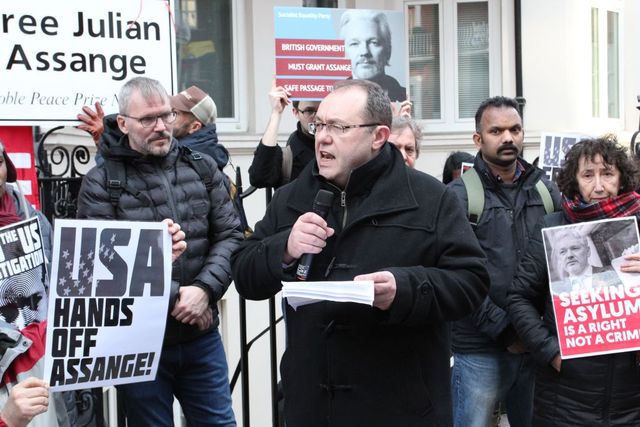 Marsden said, “Chelsea Manning, like Julian Assange, is a hero. She was jailed, abused and tortured for seven years for having exposed US war crimes in Iraq and Afghanistan.” She “is being targeted as a means of finally getting Assange. Their fates remain inextricably linked. She is being pressured to testify so that Assange can be handed a sentence more severe than the 35 years she initially received in 2013.”

Marsden added, “Assange is being involuntarily detained and if he leaves the embassy he will be shipped to the US by the British government. Anyone who says differently is a liar and an accomplice in attempts to get Assange and silence WikiLeaks … “The big business media has denied the truth for years. Rotten publications like the Guardian demanded that Assange must agree to go to Sweden—knowing he would end up in a US jail.

“Most of what passes for the ‘left’—which we have called pseudo-left groups such as the Socialist Party and Socialist Workers Party—proclaimed their solidarity with the Swedish prosecutor’s office! Since 2012, they have never written once in defence of Assange.

“Jeremy Corbyn did the same as soon as he was elected Labour leader and maintains his silence to this day. He has done nothing to challenge the plot against Assange or any assault on democratic freedoms by the state apparatus. And he would not do so, even if he formed a government.”

Marsden warned, “We live in a new age of show trials, mass surveillance, media censorship, both official and voluntary, frame-ups and witch-hunts.”

To applause, he continued, “Julian Assange is the most prominent victim of this turn to state repression and its most steadfast and courageous opponent.”

“The Socialist Equality Party is determined to break the wall of silence erected by the mainstream media and to mobilise workers and young people in Assange’s defence," he said.

“We in the SEP UK support today’s rally and all efforts to free Assange and the efforts that must now be made to free Chelsea Manning.

“Success depends upon linking this fight to a broader struggle by the working class against the capitalist profit system and all its political defenders.”

Marsden concluded, “Julian Assange cannot be free unless we here take the fight to the workplaces, colleges and schools … The SEP and our comrades in Europe, Australia, the United States and all over the world, together with the International Youth and Students for Social Equality, pledge to redouble our own campaign in this united struggle for freedom and justice for Julian Assange.”