Is Corbyn inviting trouble by not being leftist enough? 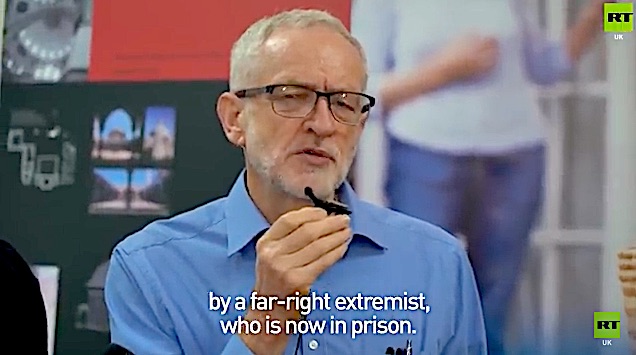 “As has been demonstrated again and again throughout history, including in the fate of Corbyn’s hero Salvador Allende in Chile, it is the tragedy of an impotent reformism that it is not only incapable of fighting for socialism, but even of defending itself…”

The Socialist Equality Party denounces the March 3 physical assault on Labour leader Jeremy Corbyn. The political differences between the SEP and Corbyn are well known and unbridgeable. But we unreservedly call on workers and young people to defend him from any attack by the extreme right.

The March 3 events are a serious warning of the dangerous right-wing political climate being whipped-up by Britain’s ruling elite and its media outlets. It points to the need for heightened political vigilance and a determined political struggle against all those political forces giving succour to the far-right.

Corbyn was visiting the Muslim Welfare Centre in north London during the annual “Visit My Mosque” day, attached to Finsbury Park mosque. John Murphy, 31, was in attendance and approached Corbyn from behind, hitting him on the head with an egg in his fist.

Murphy screamed, “When you vote you get what you vote for.” He later made clear this was an attack on Corbyn’s acceptance of a possible second referendum on Britain leaving the European Union should Prime Minister Theresa May’s proposed Brexit deal or Labour’s alternative proposal fail.

Alongside Corbyn on Sunday was Shadow Home Secretary Diane Abbott, who wrote on social media, “I was there. He punched Jeremy very hard. He happened to have an egg in his palm. But it could have been a knife. Horrible.”

It was left to bystanders to come to Corbyn’s aid, surrounding Murphy and calling the police. Inexplicably, it appears that no police officers were present to protect the Labour leader. According to reports, it was only after the assault that a marked police van with uniformed officers arrived in the centre’s driveway. No serious explanation has been given for the seemingly total absence of security protection for one of the most prominent political figures in Britain.

Murphy has since been charged by Scotland Yard with Assault by Beating and will appear at Highbury Corner Magistrates’ Court March 19.

A physical attack on a leading politician would normally receive saturation press coverage. However, the media response to the incident was belated, sporadic and deliberately framed to trivialise the issue.

Across the political spectrum, the attack was described as Corbyn being “egged.” The state broadcaster, the BBC, wrote of an egg being “thrown.” The Sun ran as its headline, “Br-Eggs-it.” Few newspapers even reported Abbott’s description of the incident, or noted the Labour source who told Skwawkbox, “It was an attempt to punch him in the face not just egg him…”

Significantly, the Metropolitan Police statement also wrongly referred to an egg being “thrown.”

The right-wing Guido Fawkes blog, frequently cited in the mainstream media, carried an interview with Murphy, publishing his jokes about having “squished an egg on Jeremy Corbyn’s head.” Murphy decried Corbyn as an associate of Hamas and the IRA, claiming his own actions were in defence of the “democratic rights of most of our country…”

The fascist-minded commentators on the blog roared in approval of the attack. One referred to Corbyn as “Jewemy,” while another declared, “Shame it wasn’t a grenade.”

The impulse for Murphy’s attack is the toxic atmosphere generated by Brexit, and the relentless and hysterical state campaign against Corbyn and the “left.” There is a sinister and deadly logic to these attacks.

On June 19, 2017, Darren Osborne drove a rented van at a group of worshipers on the street outside Finsbury Park Mosque and the Muslim Welfare Centre, injuring 12 people and killing Makram Ali, who died of multiple wounds. Osborne was jailed in February 2018 for murder and attempted murder and sentenced to serve at least 43 years in prison—with the judge stating that he was guilty of “terrorist murder.”

During the trial, Osborne admitted he had planned to murder Corbyn and London’s Labour Mayor Sadiq Khan at a June 18 Al Quds protest in central London. He had chosen Finsbury Park because “It was Jeremy Corbyn’s constituency.” Osborne was radicalised by the fascist propaganda of Britain First and the anti-Muslim diatribes of Tommy Robinson.

Just one year before Osborne’s attack, the fascist Thomas Mair murdered Labour MP Jo Cox. As he repeatedly shot and stabbed her, he shouted, “Britain first! This is for Britain. Britain will always come first.” Cox was killed just one week prior to the referendum vote on Britain’s continued membership of the EU. She was a high-profile supporter of the Remain campaign.

Politics in the UK is increasingly frenzied. The ruling class is split into warring factions fighting over whether they should leave or remain in the EU, but the orientation of the entire ruling class is ever further to the right. Above and beyond their differences over Brexit is a common aim to massively escalate the austerity measures against the working class and a growing fear of the social opposition this is generating.

Corbyn is being vilified despite his constant political retreats and willingness to abandon every policy on which he won popular support. This only proves that the real targets of the state witch-hunt against Corbyn are the hundreds of thousands of workers and young people seeking a left-wing alternative to capitalism. For this reason, Corbyn is still routinely denounced as a threat to national security who has effectively “destroyed” the Labour Party by attracting an influx of left-leaning members.

This offensive invariably brings the official political parties—Conservative and Labour—into alignment with the far right, above all thanks to their common espousal of anti-communist rhetoric. It is no accident that the physical assault on Corbyn follows last month’s separate attacks by fascists on Karl Marx’s grave in Highgate Cemetery—which were similarly downplayed by the media and all but ignored by the police.

Despite the clear and present danger posed by the growth of far-right and fascist parties throughout Europe, an incessant slander campaign is underway—led by an alliance of Labour’s Blairite right wing, the Tories and the media—portraying Labour as a hotbed of anti-Semitism. It was left to Momentum leader Jon Lansman to blurt out the real target of this filthy campaign, when he said the source of these alleged “hardcore anti-Semitic opinions” was Labour’s “300,000 or more new members.”

In the Orwellian universe occupied by Lansman, Labour’s Deputy-Leader Tom Watson and self-appointed Independent Group MP Luciana Berger, left-wing opponents of Zionism who defend the Palestinian people represent a greater danger to the Jewish people than does fascism. This lie is repeated endlessly, despite the steady escalation of anti-Semitic and anti-Muslim violence—and despite Israel’s own alignment with fascist and anti-Semitic parties from Victor Orbán’s Fidesz to Matteo Salvini’s Lega Nord.

The campaign continued without interruption the morning after the attack on Corbyn. Blairite MP Siobhain McDonagh told John Humphrys on BBC Radio Four that anti-Semitism is “very much part… of hard left politics, to be against capitalists and to see Jewish people as the financiers of capital. Ergo you are anti-Jewish people.”

When Humphrys asked, “In other words, to be anti-capitalist you have to be anti-Semitic?” McDonagh replied, “Yes.” This astonishing libel against socialism passed without comment from the BBC’s presenter.

Corbyn too has remained silent on the Finsbury Park assault and on the right-wing offensive that led to it. He cannot point out what scores of his supporters on social media have: Corbyn’s attacker comes from the right, but his readiness to act has been shaped by the efforts, led by the Blairites, to demonize and delegitimise the left.

As has been demonstrated again and again throughout history, including in the fate of Corbyn’s hero Salvador Allende in Chile, it is the tragedy of an impotent reformism that it is not only incapable of fighting for socialism, but even of defending itself. Even the most basic struggle for democratic rights requires a genuinely socialist politics, entirely opposed to that represented by Corbyn.

ABOUT THE AUTHOR
Chris Marsden is a senior editorial member of wsws.org, a Trotkyist publication.

US Stealth War on Venezuela