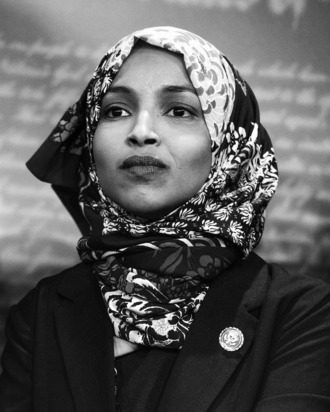 [dropcap]S[/dropcap]he’s spot on. It’s humorous to read the comments of so many people invested in the status quo capitalist ripoff system, and being frightened about the possibility of AOC’s and Ilhan’s completely accurate criticisms of that system being implemented. I’d love it. Capitalism (big and small) must die for the World to live.

Real climate change response, a green new deal, and national energy technology transformation (with abandonment of fossil fuels) will only occur with the reduction of the DOD military industrial complex by over 50% (ideally 70%). DOD is the muscle of capitalism, and capitalism must die for the World to live.

The people Ilhan Omar and AOC (and even Bernie) criticize are just hypocrites who want to keep getting their excessive profits at the cost of life, lost liberty and diminishing survivability for everyone else; people who want to prosecute genocides (e.g., the semi-slow motion one of Palestinians) they profit from and which boost their elitist ambitions and racist prejudices. And, they desperately want to be admired, respected, placed on pedestals, and be enshrined heroically in history, to inflate their vanity. The “official” backlash to Omar’s simple truthful statements is simply the dismay by this class of worthless egotistical parasites that maybe the public at large will turn on them with a mass satori of “emperor has no clothes” variety. These are people (timorous herd-minded moral weakling mediocrities) of whom Flaubert said “they are led by their materialism and their instinctive worship of power.”

Truth is freedom, speak it to gain your own moral power, and appreciate those with public megaphones – like Ilhan Omar – who do. Polite equivocation, and even silence, the “going along to get along,” is just acquiescence to enslavement. Freedom is a choice of attitude based on solidarity with humanity (not with its ruling parasites), compassion, self discipline (instead of self defeating excuses) and the self confidence to be unpopular as need be in order to be true.

ABOUT THE AUTHOR
Manuel Garcia, Jr, once a physicist, is now a lazy househusband who writes out his analyses of physical or societal problems or interactions. He can be reached at mangogarcia@att.net