Home ABOMINATIONS US withdraws embassy personnel, calling presence a “constraint” on US actions in Venezuela

US withdraws embassy personnel, calling presence a “constraint” on US actions in Venezuela

Washington announced late Monday that it is withdrawing all of its embassy personnel from Caracas in what may signal preparations for a direct US military intervention to consummate the protracted regime change operation unleashed against Venezuela. 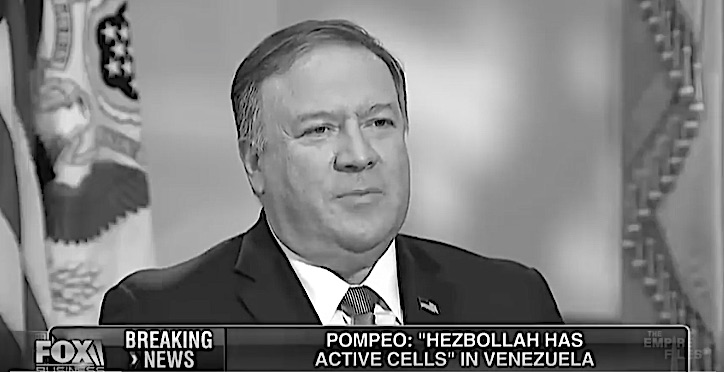 Mike Pompeo lying and issuing bully threats about Venezuela. That's his job, and he relishes it.

“This decision reflects the deteriorating situation in Venezuela as well as the conclusion that the presence of U.S. diplomatic staff at the embassy has become a constraint on U.S. policy,” Secretary of State Mike Pompeo said in a statement.

Pressed at a State Department press conference Tuesday as to what Pompeo meant by “constraint,” Elliott Abrams, the Trump administration’s special envoy for regime change in Venezuela, said that it was “prudent to take these folks out” because their presence made it “more difficult for the United States to take the actions that it needed to do to support the Venezuelan people.”

Asked whether military intervention was being prepared and if the Maduro government should see Pompeo’s statement as a threat, Abrams, a former Reagan administration State Department official who oversaw vast war crimes in Central America in the 1980s and was convicted of lying to Congress about an illegal operation to fund the “contra” terrorist war against Nicaragua, responded that he would “continue to say, because it is true, all options are on the table.”

He refused to answer a question as to what military options had been drawn up by the Pentagon for a Venezuelan intervention, saying that it would be “foolish for me to go further” in spelling out the nature of the Trump administration’s threat.

Abrams also warned that new and more punishing economic sanctions were being prepared against Venezuela and that secondary sanctions, including against China, were another option that remained “on the table.”

The US State Department also issued an extraordinary travel warning, urging US citizens not to visit the country and telling those who are either visiting or residing there to leave.

Venezuela broke off diplomatic relations with the US after Washington instigated and then recognized the January 23 self-swearing in as “interim president” of Juan Guaidó, a right-wing legislator and long-time US political “asset” who had only a short time earlier been installed as president of the country’s opposition-controlled National Assembly.

In response, the government of President Nicolas Maduro ordered the withdrawal of all US diplomatic personnel. The US pulled out all US dependents and “non-essential” officials, leaving behind a skeleton crew.

The Venezuelan government responded angrily to Pompeo’s announcement, insisting that it had issued an order Monday that all remaining US personnel leave the country within 72 hours after talks between the two countries about establishing interests sections—de facto embassies operating under the protection of a third power—to continue minimal diplomatic relations had broken down.

Pompeo’s announcement of the withdrawal of US personnel came only hours after he had appeared before a State Department press conference delivering a heated diatribe against Venezuela and “socialism” but failing to say anything about the emptying out of the US embassy.

In his prepared remarks, Pompeo described Cuba as the “true imperialist power” in the country and condemned Russia for the deals secured by its state-owned oil company Rosneft in Venezuela and its provision of military equipment to the Maduro government, including portable air defense systems.

The rant by Pompeo, a former right-wing Republican congressman from Kansas, expressed US imperialism’s overriding aim of asserting untrammeled control by US-based energy conglomerates over Venezuela’s oil reserves, the largest on the planet, and its concern that a direct US military intervention will come at a considerable cost.

The escalating US threats have been made in the context of the evident stalling of the regime change operation centered upon the attempt to foist Guaidó upon the Venezuelan people as the country’s “legitimate” president.

An attempt to trigger Maduro’s downfall by means of a bogus “humanitarian aid” intervention across the Colombian border ended in a fiasco on February 23 after the opposition failed to mobilize any significant popular support, and the Western media’s indictment of the Venezuelan government for burning truckloads of dubious “aid” was exposed as an act carried out by gangs organized by the right-wing opposition throwing Molotov cocktails at Venezuelan security forces.

The US-orchestrated regime change operation has attempted to exploit the protracted blackout that cut off power to at least 70 percent of the country from late last Thursday. Government officials stated that power had been restored to most of the country by Tuesday, but school and work were suspended for a fourth consecutive day on Wednesday.

Pompeo, Abrams and Senator Marco Rubio, the right-wing Florida Republican who has played a major role in setting the Trump administration’s Latin American policy, have all gloated over the suffering inflicted upon the Venezuelan people with the cutoff of light and water for millions across 18 of the country’s 23 states.

The Maduro government has blamed the power outage on a cyberattack mounted by US imperialism, which it claims targeted the computerized system of the Guri dam, shutting down its turbines. While government officials have yet to present conclusive evidence of an attack, Caracas has vowed to present such proof to the United Nations.

Others in Venezuela have stated that the nationwide power outage was the result not of outside intervention, but rather of the failure of the government to invest in and maintain the country’s electrical system, as well as the loss of key technical personnel who have left the country.

The executive secretary of the Federation of Electrical Industry Workers, Ali Briceño told the media that a power overload had ignited a fire that knocked out three high voltage lines triggering a shutdown at the Guri dam, and that the personnel trained to deal with such a crisis were no longer there.

In an article published by Forbes, Kalve Leetaru, a senior fellow at the George Washington University Center for Cyber Homeland Security and former fellow and instructor at the Georgetown University school of foreign service, writes that the scenario of the US sabotaging Venezuela’s power grid “is actually quite realistic.”

“Remote cyber operations rarely require a significant ground presence, making them the ideal deniable influence operation,” Leetaru states. “Given the US government’s longstanding concern with Venezuela’s government, it is likely that the US already maintains a deep presence within the country’s national infrastructure grid, making it relatively straightforward to interfere with grid operations.”

He continues: “Widespread power and connectivity outages like the one Venezuela experienced last week are also straight from the modern cyber playbook. Cutting power at rush hour, ensuring maximal impact on civilian society and plenty of mediagenic post-apocalyptic imagery, fits squarely into the mold of a traditional influence operation.”

The article added that Venezuela’s aging power system offered a perfect target for such operations “since the blame for grid failures typically falls upon government officials for failing to adequately oversee that infrastructure.”

Meanwhile, the Trump administration’s proposed budget for fiscal 2020 includes $500 million for aiding the “democratic transition” in Venezuela, under conditions in which State Department funding for all of Latin America is set to be slashed by 27 percent to only $116 million.

ABOUT THE AUTHOR
B. Van Auken is a senior editor with the wsws.org, a Marxian organization.

Biden on the Relaunch Pad: He’s Worse Than You Thought