Home ABOMINATIONS Russiagate Is Really Finished. (We told you so right when it began!)

Russiagate Is Really Finished. (We told you so right when it began!) 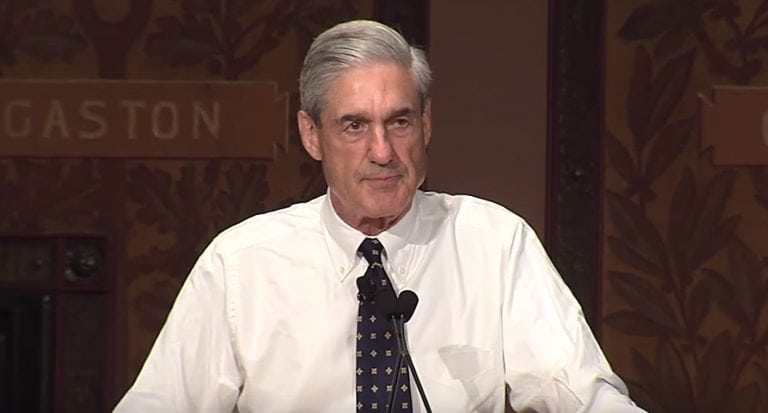 Mueller: Deep State tool and current Democrat battering ram. The indictment's timing and its content are obviously as fallacious as the whole Mueller circus, a political witch-hunt. Trump cam be assailed legitimately from the left, but that won't do for the CIA-infested Democrats.

[dropcap]O[/dropcap]n February 12 we wrote that Russiagate Is Finished. The conclusion was based on an NBC report:

After two years and 200 interviews, the Senate Intelligence Committee is approaching the end of its investigation into the 2016 election, having uncovered no direct evidence of a conspiracy between the Trump campaign and Russia, according to both Democrats and Republicans on the committee.
...
Democrats and other Trump opponents have long believed that special counsel Robert Mueller and Congressional investigators would unearth new and more explosive evidence of Trump campaign coordination with Russians. Mueller may yet do so, although Justice Department and Congressional sources say they believe that he, too, is close to wrapping up his investigation.

Russiagate conspiracy theorist Marcy Wheeler countered by arguing that a conspiracy had been proven when Trump's former campaign chief Paul Manafort admitted to handing out polling data to some Ukrainian/Russian contact to curry favor with some Russian oligarch he owed money. But Manafort's crimes, which he pled guilty for on September 14 2018, had nothing to do with "Russia" or with Trump and only peripherally with his election campaign:

On Friday, Manafort, who was chairman of Donald Trump’s presidential campaign from June to August 2016, pleaded guilty in federal district court in Washington to two charges of conspiracy against the United States—one involving a lobbying scheme that involved financial crimes and foreign-agent registration violations, and the other involving witness tampering. In the course of his plea, Manafort also admitted guilt on bank-fraud charges on which a federal jury in Virginia hung last month.

Marcy and others held out hope that the Mueller investigation would come up with an indictment that would justify the utter nonsense she and other Russiagaters promoted for over two years. Just two week ago former CIA director John Brennan, who likely conspired with British intelligence to frame Trump with the Russia affair, said (vid) that he expected further indictments:

During an appearance on MSNBC on March 5, Brennan predicted that Mueller would issue indictments related to a “criminal conspiracy” involving Trump or his associates’ activities during the 2016 election.

That last hope of the Russiagate dead-enders is now gone:

Special counsel Robert S. Mueller III submitted a long-awaited report to Attorney General William P. Barr on Friday, marking the end of his investigation into Russian interference in the 2016 election and possible obstruction of justice by President Trump.
...
A senior Justice Department official said the special counsel has not recommended any further indictments — a revelation that buoyed Trump’s supporters, even as other Trump-related investigations continue in other parts of the Justice Department.
...
None of the Americans charged by Mueller are accused of conspiring with Russia to interfere in the election — the central question of Mueller’s work. Instead, they pleaded guilty to various crimes, including lying to the FBI.The investigation ended without charges for a number of key figures who had long been under Mueller’s scrutiny ...

Conclusions from the Mueller report will be released by the Justice Department over the next days.

That the Russiagaters were wrong for falling for the bullshit peddled in the Steele dossier and the "Russian hacking" lies of the snakeoil salesmen Clapper and Brennan was obvious long ago. In June 2017 we pointed to a long Washington Post piece on alleged Russian election hacking and remarked:

The Steele dossier was fake opposition research peddled by the Clinton campaign, John McCain and a bunch of anti-Trump national security types. The still unproven claim of "Russian hacking" was designed to divert from the fact that Clinton and the DNC colluded to cheat Bernie Sanders out of the nomination. The stupid claim that commercial click-bait from a company in Leningrad was a "Russian influence campaign" was designed to explain Clinton's election loss to the other worst-candidate-ever. The "Russiagate" investigation was designed to  prevent Trump from finding better relations with Russia as he had promised during his campaign.

All were somewhat successful because some media and some bloggers were happy to sell such nonsense without putting it into the big picture.

It is high time to start a deep investigation into Brennan, Clapper, Comey and the Clinton campaign and to uncover the conspiracy that led to the Steele dossier, the FBI investigation following from it and all the other bullshit that evolved from that investigation.

As for Marcy Wheeler, Rachel Maddow and other dimwits who peddled the Russiagate nonsense I agree with the advice Catlin Johnstone gives:

Every politician, every media figure, every Twitter pundit and everyone who swallowed this moronic load of bull spunk has officially discredited themselves for life.
...
The people who steered us into two years of Russiavape insanity are the very last people anyone should ever listen to ever again when determining the future direction of our world.

Posted by b at 01:12 PM
Appendix
On his own behalf, and for all of us who have been saying this was a huge stinking hoax from the start, here's Jimmy Dore telling these idiots and phonies: "We told you so!" Now go fuck yourselves.  (Not that they will, this pestilence will likely go on.)

About the Author
"b" is Moon of Alabama's founding editor's nom de guerre.

The true story of Russia is buried under a ton of malicious propaganda. This book demolishes it.