‘Nobody is panicking!’ Rachel Maddow sheds 500,000 viewers in post-Mueller slump

Actually there is no need to imagine. It's happening already.
AN RT.COM DISPATCH 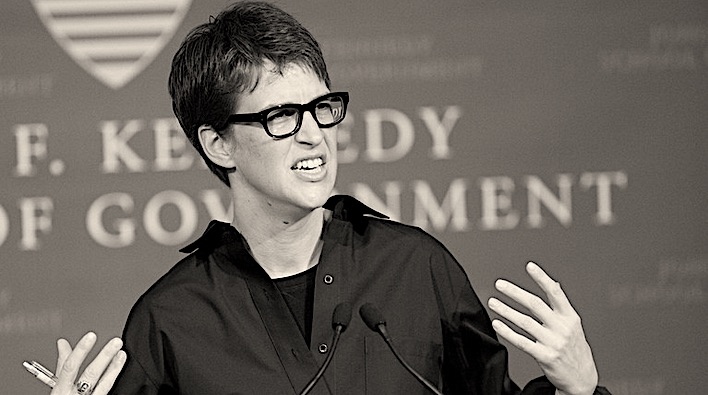 MSNBC's Maddow: A sharp slide in the ratings. Couldn' happen to a worse person. Hope it is permanent.

[dropcap]A[/dropcap]fter putting all its eggs in the Russiagate conspiracy-theory 'basket' only to be let down by the contents (or lack thereof) of the Mueller report, MSNBC - and its top attraction, Rachel Maddow - are hemorrhaging viewers.

Russian-collusion high priestess Rachel Maddow's nightly news show has slipped from number one in cable news to number six since special counsel Robert Mueller turned in his report on Friday, hemorrhaging half a million viewers in the space of a week. An MSNBC insider spilled the beans to the Daily Beast, assuring them that no one at the network was panicking.

"It was obviously a big couple of nights for Fox," they said. MSNBC's second top-rated program, "The Last Word with Lawrence O'Donnell," was also down half a million pairs of eyes.

ALSO ON RT.COMRussiagate diehards can’t let the collusion narrative go, come up with new theories instead

#Resistance media reactions to Mueller's "no more indictments" recommendation have varied wildly, from desperate pleas to "wait and see" what's in the full report to claims that Mueller himself was compromised, or asking the wrong questions, all along. Maddow herself seems to have chosen the "denial" route:

"Can we expect President Trump and the Trump White House to finally accept the underlying factual record that Russia did in fact attack us?" she asked on Monday, interpreting the report summary of Attorney General William Barr, which found no evidence to suggest Russian collusion, as proof that the Russian menace was even more menacing than previously believed.

Maddow's privileged status as Queen of the Russiagaters has largely insulated her from the standard journalistic responsibilities of telling the truth, fact-checking, and otherwise maintaining a reality-based narrative, but the Beast cited "many producers" at MSNBC who had noticeably backed away from other fiery preachers of the Russiagate gospel, like Malcolm "Russia has been plotting to invade the US for 20 years! also  memes are cruise missiles" Nance.

Despite the temporary ratings death spiral, network insiders took the long view, speaking of a "pivot to 2020" and keeping the faith that the Trump administration would provide plenty of raw meat for its pundits in the coming months.

And Trumpworld has already begun distributing that meat, blasting a memo to all TV news producers on Monday night that was half victory lap, half threat.

"At this point, there must be introspection from the media who facilitated the reckless statements and a serious evaluation of how such guests are considered and handled in the future," the missive chided, mentioning some of the worst offenders – including former CIA director John Brennan and Democratic National Committee chairman Tom Perez – by name.

Trump’s Green Light to Israel: First the Golan, Then the West Bank?