Announcing my new book – I’ll Ruin Everything You Are: Ending Western Propaganda on Red China

This book is endorsed and recommended by the editorial board of The Greanville Post. 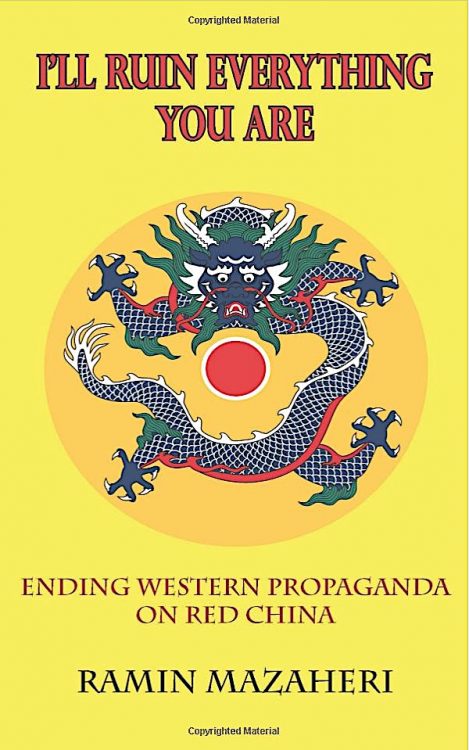 I’d like to briefly announce that I have a new book for sale, I’ll Ruin Everything You Are: Ending Western Propaganda on Red China.

China has soared in the 21st century, while the neoliberal austerity-minded West has slumped – longstanding Western predictions and promises have totally failed. There is no longer any doubt about this.

This requires us to accommodate reality and drastically rethink our views of the key events of China’s socialist era, and also re-examine the key political and cultural structures of Chinese socialism. That’s what this new book does.

This type of an honest reckoning is rare in 2019, because Western propaganda on the 1949 Revolution, the Mao Zedong era, the Great Leap Forward, the Cultural Revolution and “Socialism with Chinese characteristics” is so very, very widespread, pernicious and misleading. Standing up for socialist China is not easy, even though their countless Western detractors have been proven totally wrong – will you still keep buying their books, instead?

If you have followed my writing you may recall that last year I wrote an 8-part series which compared old, biased scholarship on China with new scholarship. In short, I exposed the anti-socialist (and thus anti-Chinese) propaganda of the most popular English-language, university-level history textbook on China, written by Harvard’s first-ever China scholar, while lauding the arrival of not hostile, accurate, 21st-century scholarship from people like Jeff J. Brown.

Added in are perspectives and analyses gleaned from my years as a daily hack reporter. Daily reporting, I feel, provides a unique view of politics and society, and one which is under appreciated despite being increasingly rare in modern journalism. The view from ivory tower academia, “woke” expatriate independent analysts, and the urgency and finality of daily journalism – I think you won’t find this potent concoction elsewhere on China analysis.

The bulk of the book includes that 8-part series, as well as some other published writings of mine on China.

Bottom line: yes, these are all available online for free… but wouldn’t it be great if you had them all in one place? I’m certain you have asked yourself exactly that question on at least three separate occasions. Ask no longer!

What does buying this book get you?

The admiration of your friends, certainly. I also note that it functions well as a door stop and/or a coffee coaster. It could also freshen your breath and prevent gum disease (I haven’t tried it for that yet).

The foreword was graciously provided by Dongping Han, who wrote the indispensable The Unknown Cultural Revolution: Life and Change in a Chinese Village, available here. This advertisement is running alongside a new 8-part series I have written which relies on Han’s book to popularise more new analyses and data which staggeringly rewrite the false histories of China’s Cultural Revolution.

The book was published by Badak Merah, a revolutionary & independent publishing house which also prints the indispensable, inspirational and unrepentantly leftist journalism of Andre Vltchek, Jeff J. Brown, and others.
Amazingly, there is simply no other place to sell our book besides Amazon.

It seems amusing and hypocritical that a book about socialism is only being sold on Amazon, which is perhaps the most cutthroat capitalist corporation today. All I can say is: we tried. Amazon has bought up so many parts of the modern publishing industry, like CreateSpace, that there simply are no real options for us. We are looking, though.

Bottom line: the most common phrase heard among leftist authors is, “just get the ideas out there”, because leftist ideas are so harshly repressed in the West, both formally and informally. And it’s not like we’re in this for the money.

Why a price of $16.49? I wanted to keep it as low as possible. However, $12 goes to Amazon. That means my publishers – who worked hard on this and deserve some compensation for their efforts, and who sure picked out a great cover – get only $2. Because they are true leftists who believe in equality – a rarity in publishing – I get $2 as well.

LOL, the idea that $12 of your purchase goes to Amazon’s pockets may make many refuse to buy this book, or any from Amazon, but please keep in mind that your $4 is rather seriously necessary for us to get more good ideas “out there”.

Selling pro-socialist works in English necessarily aims at a very small audience, unfortunately. My personal hope is that this book sells just 1,000 copies, but I am being rather optimistic. That means this type of a book is more likely to cause me hassles with various governments, than to give me a ton of profits. However, these admissions should show how important I think it is that weoverturn western propaganda on socialist China.

What’s with the title? Poor grammar in the first part. Well, that comes from the David Bowie song “China Girl”, and music is a terrible way to properly learn a language. But it was either a line from that song, or “(Everybody Was) Kung-Fu Fighting”. However, a title like, “Funky Chinamen from Funky Chinatown: Ending Western Propaganda on Red China,” just didn’t work for me.

So, if you can possibly afford a copy I can assure you that it would be much appreciated. And if you can make the purchase, I wish you happy reading!

“We Are Not Investigators”: CNN’s Jeff Zucker Unapologetic For Perpetual Russia-Hoax Coverage

Ground Control to Planet Lockdown: This Is Only...