HELP ENLIGHTEN YOUR FELLOWS. BE SURE TO PASS THIS ON. SURVIVAL DEPENDS ON IT.
Margaret Kimberley, BAR editor and senior columnist •  17 Apr 2019 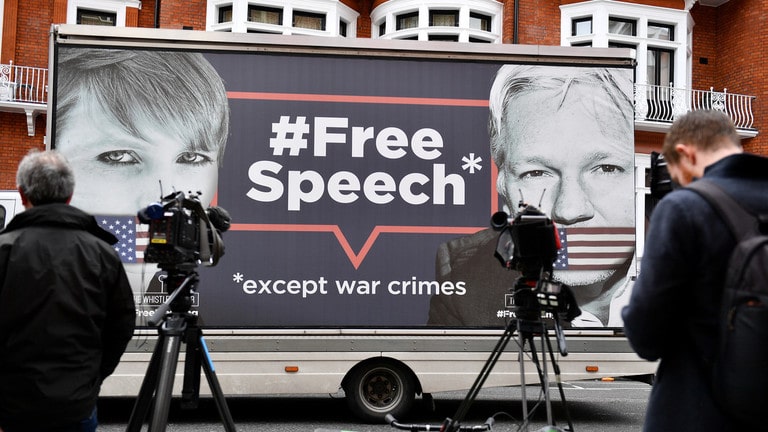 Liberals are just as much true believers in imperialism as the right wing they claim to oppose.

Ever since Donald Trump was elected president we have heard a lot about people who call themselves the “resistance.” That word has very significant meaning and should not be used frivolously. The enslaved Haitian people resisted the French 200 years ago. Harriet Tubman resisted and so did Tecumseh. Brave people all over the world have resisted colonial invasion, occupation, and racist violence.

But resistance for the anti-Trump group doesn’t amount to very much. They are united in dislike of Donald Trump, but only some of the time. They call him a fascist, but they mute themselves when his fascism supports the bipartisan imperialist consensus.

The so-called resistance have been conspicuously silent ever since Julian Assange was arrested after Ecuador withdrew his asylum from its London embassy. Under the guise of defending the press, this same group became hysterical when Trump had a stupid argument with a CNN reporter.They are enraged when he refers to the media as “enemies of the people.” But when publisher and journalist Julian Assange was snatched up by the U.S. and its vassal states they either said nothing or condemned a man whose actions are the very embodiment of resistance.

“This same group became hysterical when Trump had a stupid argument with a CNN reporter.”

Julian Assange now sits in a London prison awaiting extradition hearings. The United States government convened a grand jury in 2017 which handed down a secret indictment against him. He is charged with conspiracy to commit computer intrusionin relation to Chelsea Manning’s 2010 revelation of United States war crimes in Iraq. The Collateral Murder video shows army soldiers killing civilians, returning for a “double tap” killing of first responders, and laughing about their massacre. Anyone who revealed these horrors is a hero and should be supported without any ifs, ands or buts.

The United Kingdom played its usual role of partner in crime for the U.S. Fellow puppet state Australia refused to protect its citizen. Ecuador made off with a cool $4 billion in IMF loans. There is so much corruption to oppose but one wouldn’t know that with all the cheering on behalf of the surveillance state.

“Anyone who revealed these horrors is a hero.”

This resistance is little more than a collective hissy fit from dead ender Democrats who insist on following a party that can’t even reliably stay in office.  They have spent the last three years railing against Trump but bite their tongues when he commits an act that reeks of fascist ideology.

The kindest thing that can be said is that they have been hypnotized by a combination of Democratic Party and corporate media lies. It is very difficult to determine the truth in a culture saturated with all the deformities of an imperial state in panic mode. One has to act as a detective and know which web sites to read or whom to follow on social media in order to learn anything outside of the confines of state propaganda. Ever since election night in November 2016 the public have been subjected to a relentless campaign meant to deflect righteous anger away from the Democrats while furthering imperialist goals at the same time.

Julian Assange has become the poster child for the big lie. His leaks of Democratic National Committee emails are blamed for Hillary Clinton’s defeat. But there was no computer hack of the DNC at all. Assange received leaked materials from an insider and used Wikileaks to publish it.

“His leaks of Democratic National Committee emails are blamed for Hillary Clinton’s defeat.”

But that is only a partial explanation. The reality is far worse. Liberals are just as much true believers in imperialism as the right wing they claim to oppose.They are nothing if not consistent. When the Trump administration announced the coup attempt against the Venezuelan government the resistance didn’t resist at all.

Instead they repeated talking points from the New York Timesand National Public Radio which labeled the elected Venezuelan president a brutal dictator. They didn’t question the United States claim of a right to undo the will of people in another country. Some gave wishy washy criticism of military intervention but none of them questioned an intervention which is fascist by any definition.

“Liberals are just as much true believers in imperialism as the right wing they claim to oppose.”

These people will never defend Julian Assange. According to their world view he doesn’t deserve to be defended. He revealed government secrets, which runs counter to their support of the imperialist state, and they think he deprived them of a second Clinton presidency.

Now we know who is for real and who is a phony. Chelsea Manning sits in jail for a second time because she refused to testify before the grand jury which indicted Assange. There are people all over the world occupying Venezuelan embassies and consulates in order to protect them from the would be usurpers. That is resistance. Attacking the person who revealed war crimes is compliance in the service of the state. Perhaps this group needs a new name. They should be honest and call themselves the conformists. That would be truth in advertising.

Black Agenda report’s Senior Editor and Columnist Margaret Kimberley’s Freedom Rider column appears weekly at the Black Agenda Report. Kimberley lives in New York City, and can be reached via e-Mail at Margaret.Kimberley (at) BlackAgendaReport.com. She maintains a frequently updated blog as well as at http://freedomrider.blogspot.com.

On the ( Empire’s ) Waterfront