Throughout the last months the military situation in west Syria was more or less stable. That is about to change.

While this map is from August 2018 it is still mostly accurate. Idleb province, and parts of north Hama, are under control of 'rebel' forces led by Hayat Tahrir al-Sham (HTS), an Al-Qaeda aligned terrorist group. 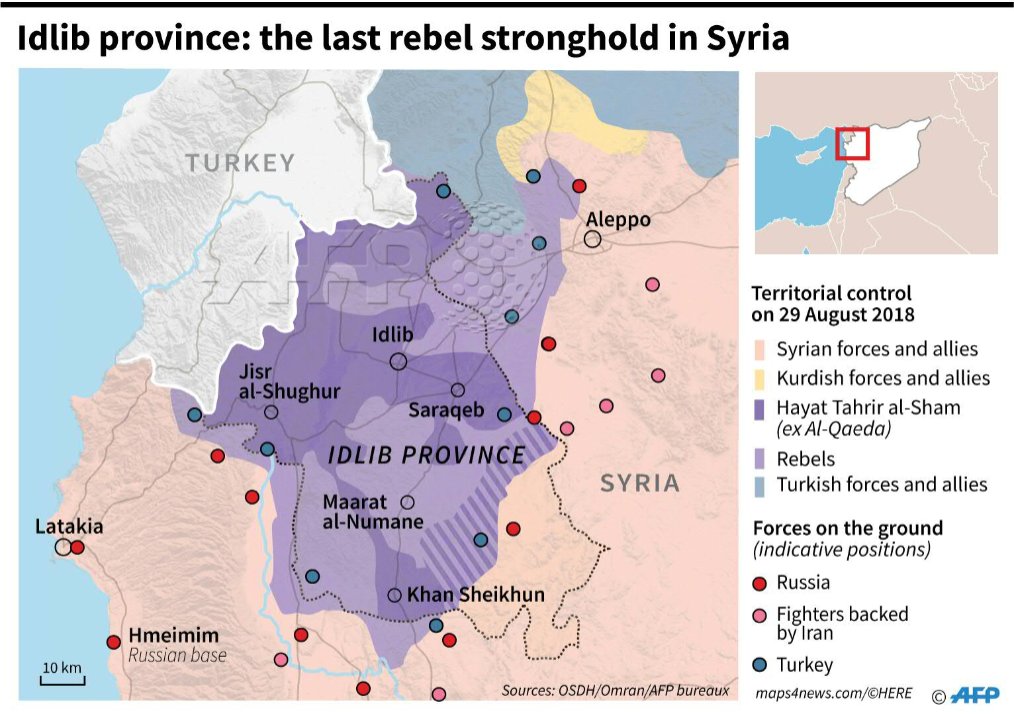 A September 2018 agreement between Russia and Turkey stipulated that Turkey would bring the 'rebels' in Idleb under control. A 20 kilometer wide demilitarized zone was to be established along the demarcation line. All heavy weapons were to be removed from the zone. The M4 and M5 highways were to be opened for traffic.

None of it happened. Turkey established observation posts along the demarcation line but these had no effect. Instead HTS assimilated more and more of the 'Free Syrian Army' groups that Turkey supported. The organization acquired new arms and equipment and intensified its training.

During the last months they became more active. Mortar and missiles were fired into Aleppo city. Command units crossed the demarcation line, attacked Syrian army guard posts and caused a number of casualties. Drones were flown from Idleb against the Russian base at Hmeimim. Missile volleys were launched against the base.

The Syrian government long demanded to finally attack in Idleb, but Russia held it back. There was a risk that Turkey would use an attack on Idleb to switch back to the U.S. side. That risk is now much lower as the U.S. became more hostile to its NATO ally.

Two weeks ago, after HTS shot the latest missile volley at Hmeimim, Russian jets started to pound HTS positions in Idleb governorate with hundreds of bomb attacks. Additionally Russian intelligence reported that HTS was preparing to launch a large attack against Hama city further south. Russia flew in new fighter jets and bombers to up its engagement capabilities. The Syrian air force and its artillery also chimed in. It soon became obvious that these attacks were not just revenge acts but the preparations for a larger campaign.

Turkey recognized that it can no longer do anything to prevent an attack on Idleb. In a Hail Mary move it tried to at least fulfill one of its old aims: to capture the town Tal Rifaat and Menagh Air Base north of Aleppo. These are in the Kurdish area (yellow) at the top of the map. But the defenders were prepared. When Turkish aligned 'rebels' under the command of Turkish officers attacked their positions they retreated. The Turks advanced and suddenly found themselves in a minefield and under artillery attack. They had been trapped. After several were killed and wounded the Turkish forces had to retreat and the Syrian army and the Kurdish units could retake their old positions. In parallel Syrian artillery fired on one of the Turkish outposts in Idleb governorate. Four Turkish soldiers were wounded and evacuated.

Today the Syrian army launched an attack in the south of the pocket and captured several 'rebel' positions. There are signs that another attack will soon start west of Aleppo to remove any threats to the city. Another attack axis is likely to be formed on the western side of the pocket with the aim of pushing the terrorists further away from Hmeimim.

These attacks are not (yet) the big campaign to liberate all of Idleb governorate. It seems more likely that this will be done piecemeal with one bite at a time followed by a pause. One intermediate aim is to regain full control over the M5 and M4 highways in Idelb governorate. That would allow for direct traffic between Latakia to Aleppo and from Hama to Aleppo and could help to revive the devastated economy. 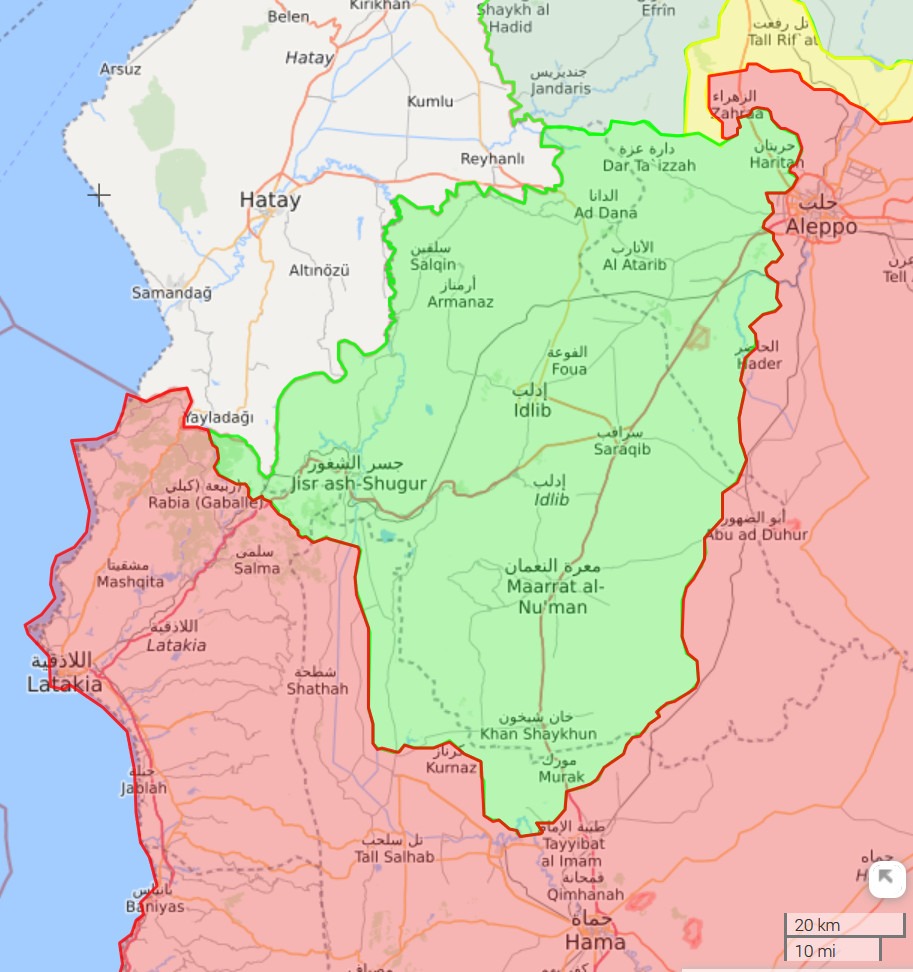 Is the U.S. will do anything to stop the Syrian operations. That now seems unlikely:

"Idlib is essentially the largest collection of al-Qaida affiliates in the world right now," Michael Mulroy, deputy assistant secretary of defense for the Middle East, said this week during remarks at the Center for a New American Security in Washington."We have very limited insights as to what's going on," he added.

That this is (again) publicly recognized, likely  means that Syria is now allowed to clean up the mess. Back in 2017 and 2018, when Syria was ready to retake Idleb, the U.S. threatened to stop any attack. At that time it still cared for its ally Turkey which would be swamped with new refugee wave should the HTS terrorists and their families have to retreat from Idelb. The U.S. no longer cares about Turkey. Any new difficulty for the wannabe Sultan Erdogan will likely be welcome.

The terrorist haven in Idelb is only one of the many problems Syria still has to cope with.

The worst is currently a shortage of gasoline as U.S. sanctions block Iranian oil deliveries to Syria. Iranian tankers with the destination of Syria are held up at the Suez canal. Requesting gasoline from Russia would have a political price that Syria seems not ready to pay. The Syrian oilfields, which could produce enough to keep the country running, are under control of the U.S. proxy forces. The U.S. prohibited to sell that oil to the Syrian government.

The Yellow Vest Salpêtrière Hospital hoax: I reported live from there as it happened