Home BRITISH DEVIOUSNESS Robert Stuart vs the BBC: No integrity left in the Western media establishment.

One Man's Quest to Expose a Fake BBC Video about Syria

[dropcap]I[/dropcap]t's a David vs Goliath story. A former local newspaper reporter, Robert Stuart, is taking on the British Broadcasting Corporation. Stuart believes that a sensational video story about an alleged atrocity in Syria "was largely, if not entirely, staged." The BBC would like it all to just go away. But like David, Stuart will not back down or let it go. It has been proposed that the BBC could settle the issue by releasing the raw footage from the event, but they refuse to do this. Why? 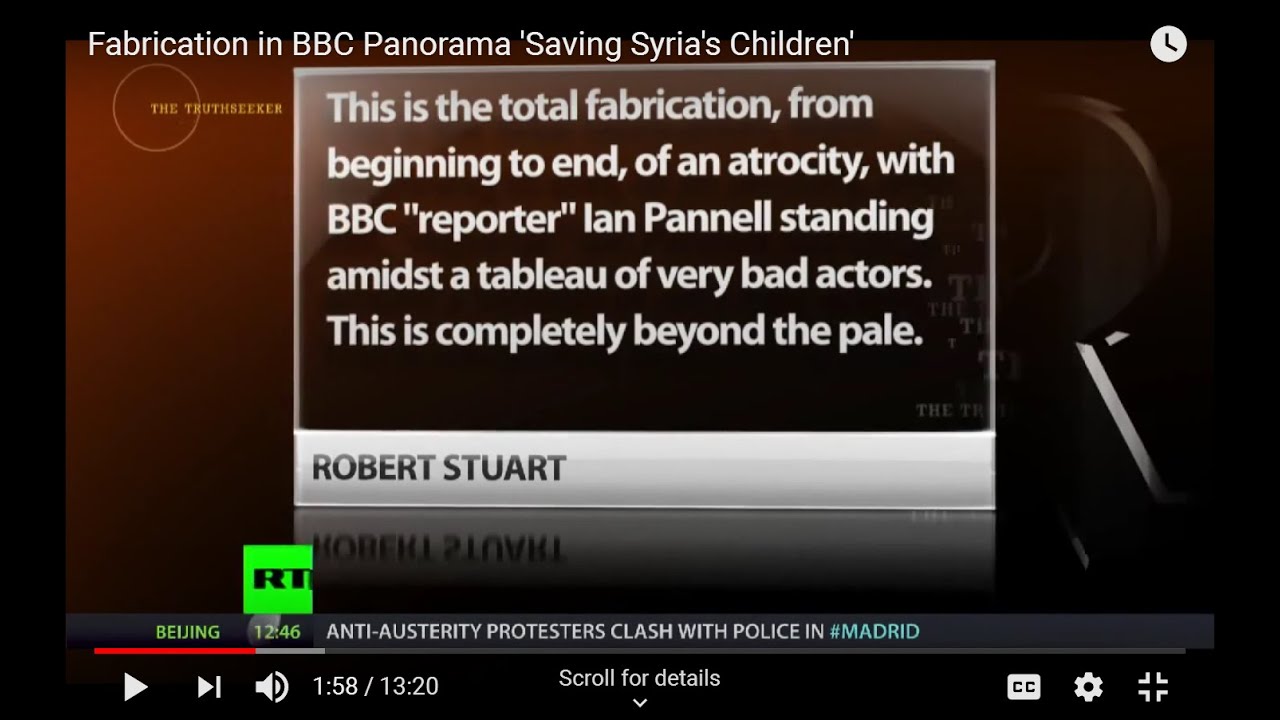 The news report footage was taken in a town north of Aleppo city in a region controlled by the armed opposition. It purports to show the aftermath of a Syrian aerial attack using incendiary weapons, perhaps napalm, killing and burning dozens of youth. The video shows the youth arriving and being treated at a nearby hospital where the BBC film team was coincidentally filming two British medical volunteers from a British medical relief organization.

The video had a strong impact. The incident and original filming was on August 26. The video was shown on the BBC three days later as the British Parliament was debating whether to support military action by the US against Syria. As it turned out, British parliament voted against supporting military action. But the video then and subsequently as a Panorama feature was effective in demonizing the Syrian government. After all, what kind of government attacks school children with napalm-like bombs?

'Saving Syria's Children' was produced at a critical moment in the Syrian conflict. Just days before, on August 21, there had been an alleged sarin gas attack against an opposition held area on the outskirts of Damascus. Western media was inundated with videos showing dead Syrian children amidst accusations the Syrian government had "attacked its own people", killing up to 1400. The Syrian government was assumed to be responsible and the attack said to be a clear violation of President Obama's "red line" against chemical weapons.

This incident had the effect of increasing pressure for Western states or NATO to attack Syria. It would be for humanitarian reasons, rationalized by the "responsibility to protect".

The assumption that 'the regime' did it has been challenged. Highly regarded American journalists including the late Robert Parry and Seymour Hersh investigated and contradicted the mainstream media. They pointed to the crimes being committed by the armed opposition for political goals. A report by two experts including a UN weapons inspector and Veteran Intelligence Professionals for Sanity also came to the conclusion that the Syrian government was not responsible and the attack was actually by an armed opposition group with the goal of forcing NATO intervention.

Why the Controversial Video is Suspicious

After seeing skeptical comments about 'Saving Syria's Children' on an online discussion board, Robert Stuart looked at the video for himself. Like others, he thought some sequences looked artificial, almost like scenes from a badly acted horror movie.

But unlike others, he decided to find out. Thus began his quest to ascertain the truth. Was the video real or was it staged? Was the video authentic or contrived propaganda?

Over the past five and a half years his research has revealed many curious elements about the video including:
* Youth in the hospital video appear to act on cue.
* There is a six hour discrepancy in reports about when the incident occurred.
* One of the supposed victims, shown writhing in pain on a stretcher, is seen earlier walking unaided into the ambulance.
* The incident happened in an area controlled by a terror group associated with ISIS.
* One of the British medics is a former UK soldier involved in simulated injury training.
* The other British medic is daughter of a prominent figure in the Syrian opposition.
* In 2016 a local rebel commander testified that the alleged attack never happened.

Robert Stuart's formal complaints to the BBC have been rebuffed. His challenges to those involved in the production have been ignored or stifled. Yet his quest has won support from some major journalistic and political figures.

Former Guardian columnist Jonathan Cook has written several articles on the story. He says, "Stuart's sustained research and questioning of the BBC, and the state broadcaster's increasing evasions, have given rise to ever greater concerns about the footage. It looks suspiciously like one scene in particular, of people with horrific burns, was staged."

Former UK Ambassador Craig Murray has compared scenes in 'Saving Syria's Children' with his own harrowing experience with burn victims. He says, "The alleged footage of burn victims in hospital following a napalm attack bears no resemblance whatsoever to how victims, doctors and relatives actually behave in these circumstances."

Film-maker Victor Lewis-Smith has done numerous projects for the BBC. When learning about Stuart's research he asked for some explanations and suggested they could resolve the issue by releasing the raw video footage of the events. When they refused to do this, he publicly tore up his BBC contract.

The BBC has a reputation for objectivity. If BBC management was deceived by the video, along with the public, they should have a strong interest in uncovering and correcting this. If there was an error, they should want to clarify, correct and ensure it is not repeated.

Has the BBC produced and broadcast contrived or fake video reports in support of British government foreign policy of aggression against Syria? It is important that this question be answered to either restore public trust (if the videos are authentic) or to expose and correct misdeeds (if the videos are largely or entirely staged).

The issue at stake is not only the BBC; it is the manipulation of media to deceive the public into supporting elite-driven foreign policy. 'Saving Syria's Children' is an important case study.

Robert Stuart is not quitting. He hopes the next step will be a documentary film dramatically showing what he has discovered and further investigating important yet unexplored angles.

The highly experienced film producer Victor Lewis-Smith, who tore up his BBC contract, has stepped forward to help make this happen.

But to produce a high quality documentary including some travel takes funding. After devoting almost six years to this effort, Robert Stuart's resources are exhausted. The project needs support from concerned members of the public.

If you support Robert Stuart's efforts, go to this crowdfunding website. There you can learn more and contribute to this important effort to reveal whether the BBC video 'Saving Syria's Children' showed true or staged events. Was the alleged "napalm" attack real or was it staged propaganda? The project needs a large number of small donors and a few substantial ones to meet the June 7 deadline.

As actor and producer Keith Allen says," Please help us to reach the target so that we can discover the facts, examine the evidence, and present the truth about 'Saving Syria's Children'. I think it's really important."

About the Author
Susan Dirgham is editor of "Beloved Syria - Considering Syrian Perspectives" published in Australia. • Rick Sterling is an investigative journalist based in northern California. He can be contacted via rsterling1@gmail.com

MOST EXCELLENT COMMENTS: Pavimentov on the Trumpian riddle