Home CHINA Iran at the center of the Eurasian riddle

Iran at the center of the Eurasian riddle

With the dogs of war on full alert, something extraordinary happened at the 19th summit of the Shanghai Cooperation Organization (SCO) late last week in Bishkek, Kyrgyzstan.

Virtually unknown across the West, the SCO is the foremost Eurasian political, economic and security alliance. It’s not a Eurasian NATO. It’s not planning any humanitarian imperialist adventures. A single picture in Bishkek tells a quite significant story, as we see China’s Xi, Russia’s Putin, India’s Modi and Pakistan’s Imran Khan aligned with the leaders of four Central Asian “stans”. 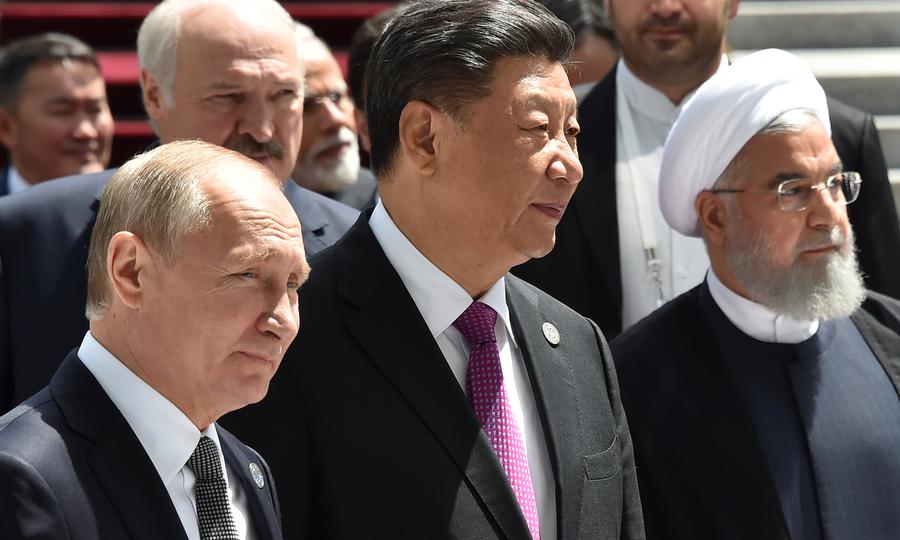 The SCO is bound to significantly expand by 2020, with possible full membership for both Turkey and Iran. It will then feature all major players of Eurasia integration. Considering the current incandescence in the geopolitical chessboard, it’s hardly an accident a crucial protagonist in Bishkek was the ‘observer’ state Iran.

Iranian President Hassan Rouhani played his cards masterfully. Rouhani speaking directly to Putin, Xi, Modi and Imran, at the same table, is something to be taken very seriously. He blasted the US under Trump as “a serious risk to stability in the region and the world”. Then he diplomatically offered preferential treatment for all companies and entrepreneurs from SCO member nations committed to investing in the Iranian market.

The Trump administration has claimed – without any hard evidence – that the Islamic Revolutionary Guard Corps (IRGC), which Washington brands as a “terrorist organization” – was behind the attacks on two tankers in the Gulf of Oman last week. As the SCO summit developed, the narrative had already collapsed, as Yutaka Katada, president of Japanese cargo company Kokuka Sangyo, owner of one of the tankers, said: “The crew is saying that it was hit by a flying object.”

Iranian Foreign Minister Javad Zarif had accused the White House of “sabotage diplomacy” but that did not derail Rouhani’s actual diplomacy in Bishkek.

Xi was adamant; Beijing will keep developing ties with Tehran “no matter how the situation changes”. Iran is a key node of the New Silk Roads, or Belt and Road Initiative (BRI). It’s clear for the leadership in Tehran that the way forward is full integration into the vast, Eurasia-wide economic ecosystem. European nations that signed the nuclear deal with Tehran – France, Britain and Germany – can’t save Iran economically.

But then Modi canceled a bilateral with Rouhani at the last minute, with the lame excuse of “scheduling issues”.

That’s not exactly a clever diplomatic gambit. India was Iran’s second largest oil customer before the Trump administration dumped the nuclear deal, known as the Joint Comprehensive Plan of Action, over a year ago. Modi and Rouhani have discussed the possibility of India paying for Iranian oil in rupees, bypassing the US dollar and US sanctions.

Yet unlike Beijing and Moscow, New Delhi refuses to unconditionally support Tehran in its do-or-die fight against the Trump administration’s economic war and de facto blockade.

Modi faces a stark existential choice. He’s tempted to channel his visceral anti-Belt-and-Road stance into the siren call of a fuzzy, US-concocted Indo-Pacific alliance – a de facto containment mechanism against “China, China, China” as the Pentagon leadership openly admits it.

Or he could dig deeper into a SCO/RIC (Russia-India-China) alliance focused on Eurasia integration and multipolarity.

Aware of the high stakes, a concerted charm offensive by the leading BRICS and SCO duo is in effect. Putin invited Modi to be the main guest of the Eastern Economic Forum in Vladivostok in early September. And Xi Jinping told Modi in their bilateral get together he’s aiming at a “closer partnership”, from investment and industrial capacity to pick up speed on the stalled Bangladesh-China-India-Myanmar (BCIM) Economic Corridor, another BRI stalwart.

Imran Khan, for his part, seems to be very much aware how Pakistan may profit from becoming the ultimate Eurasia pivot – as Islamabad offers a privileged gateway to the Arabian Sea, side by side with SCO observer Iran. Gwadar port in the Arabian Sea is the key hub of the China-Pakistan Economic Corridor (CPEC), much better positioned than Chabahar in Iran, which is being developed as the key hub of India’s mini-New Silk Road version to Afghanistan and Central Asia.

On the Russian front, a charm offensive on Pakistan is paying dividends, with Imran openly acknowledging Pakistan is moving “closer” to Russia in a “changing” world, and has expressed keen interest in buying Sukhoi Su-35 fighter jets and Mi-35M attack helicopters.

Iran is at the heart of the BRI-SCO-EAEU integration road map – the nuts and bolts of Eurasian integration. Russia and China cannot allow Iran to be strangled. Iran boasts fabulous energy reserves, a huge internal market, and is a frontline state fighting complex networks of opium, weapons and jihadi smuggling – all key concerns for SCO member states.

There’s no question that in southwest Asia, Russia and Iran have interests that clash. What matters most for Moscow is to prevent jihadis from migrating to the Caucasus and Central Asia to plot attacks against the Russian Federation; to keep their navy and air force bases in Syria; and to keep oil and gas trading in full flow.

Tehran, for its part, cannot possibly support the sort of informal agreement Moscow established with Tel Aviv in Syria – where alleged Hezbollah and IRGC targets are bombed by Israel, but never Russian assets. 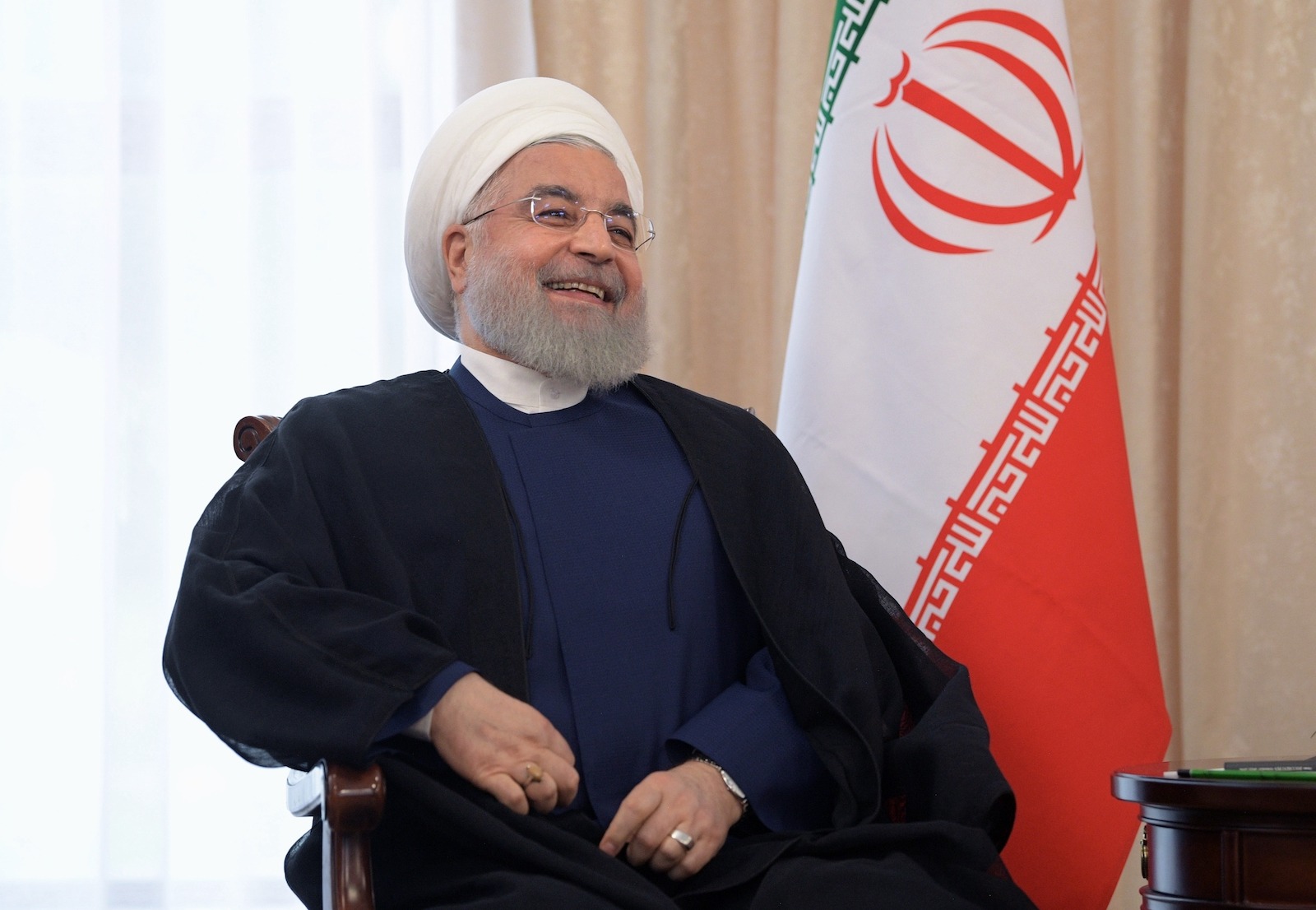 Iran's President Hassan Rouhani attends a meeting with his Russian counterpart on the sidelines of the Shanghai Cooperation Organisation (SCO) summit in Bishkek on June 14, 2019. (Photo by Alexey DRUZHININ / SPUTNIK / AFP)

But still, there are margins of maneuver for bilateral diplomacy, even if they now seem not that wide. Supreme Leader Ayatollah Khamenei has issued the new rules of the game; reduce imports to a minimum; aim for less reliance on oil and gas exports; ease domestic political pressure (after all everyone agrees Iranians must unite to face a mortal threat); and stick to the notion that Iran has no established all-weather friends, even Russia and China.

Iran is under a state of siege. Internal regimentation must be the priority. But that does not preclude abandoning the drive towards Eurasian integration.

The pan-Eurasian interconnection became even more glaring at what immediately happened after Bishkek; the summit of the Conference on Interaction and Confidence-Building Measures in Asia (CICA) in Dushanbe, Tajikistan.

Bishkek and Dushanbe expanded what had already been extensively discussed at the St Petersburg forum, as I previously reported. Putin himself stressed that all vectors should be integrated: BRI, EAEU, SCO, CICA and ASEAN.

The Bishkek Declaration, adopted by SCO members, may not have been a headline-grabbing document, but it emphasized the security guarantees of the Central Asian Nuclear-Weapons-Free Zone Treaty, the “unacceptability of attempts to ensure one country’s security at the expense of other countries’ security, and condemning “the unilateral and unlimited buildup of missile defense systems by certain countries or groups of states”.

Yet the document is a faithful product of the drive towards a multilateral, multipolar world.

Among 21 signed agreements, the SCO also advanced a road map for the crucial SCO-Afghanistan Contact Group, driving deeper the Russia-China strategic partnership’s imperative that the Afghan drama must be decided by Eurasian powers.

And what Putin, Xi and Modi discussed in detail, in private in Bishkek will be developed by their mini-BRICS gathering, the RIC (Russia-India-China) in the upcoming G20 summit in Osaka in late June.

Meanwhile, the US industrial-military-security complex will continue to be obsessed with Russia as a “revitalized malign actor” (in Pentagonese) alongside the all-encompassing China “threat”.

The US Navy is obsessed with the asymmetrical know-how of “our Russian, Chinese and Iranian rivals” in “contested waterways” from the South China Sea to the Persian Gulf.

With US conservatives ratcheting up “maximum pressure” trying to frame the alleged weak node of Eurasia integration, which is already under total economic war because, among other issues, is bypassing the US dollar, no one can predict how the chessboard will look like when the 2020 SCO and BRICS summits take place in Russia.