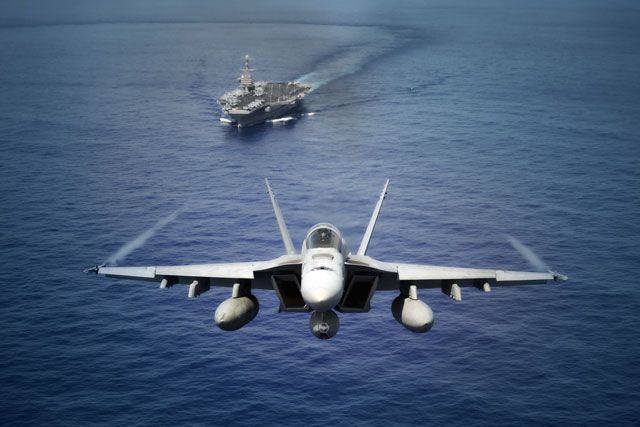 An insufferably sanctimonious and hypocritical superpower manufactures war pretexts across the globe, while its benighted citizens remain in a deep informational coma.

The Trump administration has a problem: How to start another war – this time with Iran – without having a justifiable reason for one. No doubt members of Trump’s team, led by the war-thirsty and perdurable John Bolton, are working hard to solve this urgent problem. If they can’t find a justification, they may have to create one. Or perhaps they will find what they have already created. Whatever the solution, Americans should feel confident that their leaders, together with their Israeli and Saudi bedfellows, are not sitting on their hands. Crazy people do crazy things.

After the Gulf War in 1991 and the invasion of Iraq in 2003, it slowly became apparent what alternative media and war critics had insisted was the case before and during these wars: That the U.S. government had achieved a propaganda coup by tightly controlling the media access to the truth and by getting the mainstream media (MSM) to do their bidding. This ex post facto revelation was, of course, not prime time or front page news, but was reported bit-by-bit by critics or was buried deep within the news reports. While some of the truth arrived, it did so obliquely, and corporate media devotees went back to their gullible and comforting sleep.

Yet once again Americans are being played for fools by the government and MSM. The open secret, the insider’s fact, is that the U.S. plans to attack Iran if they can seduce enough Americans that they are threatened. The Trump people know this, the corporate media shills know it, for the Bush-Clinton-Obama scenario, written years ago, is to act as if it weren’t so, to act as if a peaceful solution were being seriously considered. Iraq, Afghanistan, Libya, Syria, etc. all learned better. The U.S. never seeks a peaceful solution.

The corporate media, however, always avoid the key question: How will the U.S. justify its fait accompli and what is its goal? This question is too disturbing to broach, for it suggests that the fix is in, the show is rigged, something is rotten in the symbiotic relationship between a government intent on war and a media in that government’s service.

What could, in the eyes of the American people, justify a war against Iran, assuming the Trump administration even cares about justification? Will Iran attack Israel? No. Will Iran attack the United States? No. Of course not, not least because it can’t, even if it wished to do so, which it clearly doesn’t. Any such Iranian attack – absurd as such a suggestion is – would give the Trump administration ample justification for a war.

So what is the administration to do now that the news from so many quarters – Syria, Iraq, Afghanistan, etc. – is so bad? What, if they are intent on a war with Iran, are they going to do about the absence of a cause for war? It seems that they are in a dilemma.

“Seem” is the key word. Logically speaking, if there is a war plan, if there is a Bolton/Pompeo/Israeli scenario, then the gun on the wall in the first act of this deadly play, must go off in the final act, no matter how long it takes. The audience is being primed by the administration and their media mouthpieces to expect a “smoking gun.” But what might it be?
“Facing clear evidence of peril, we cannot wait for the final proof, the smoking gun, that could come in the form of a mushroom cloud,” George W. Bush said at a staged pseudo-event on October 7, 2002 as he set Americans up for the invasion of Iraq in March 2003. It was all predictable, blatant deception. And the media played along with such an absurdity. Iraq obviously had no nuclear weapons or the slightest capability to deliver even a firecracker on the U.S.
Now Iran is the Nuclear devil. Now Iran must be stopped. Despite clear evidence to the contrary, Iran has been and will be accused of developing nuclear weapons. Saddam was said to have had them; Iran only developing them, yet both lies need no evidence, just rhetoric.

Nevertheless, it might be claimed that secret “evidence” must be withheld on “national security” grounds or for fear of endangering Iranian informers or their families. Thus a preemptive attack could be justified on the grounds of preventing another “Ground Zero” (a misnomer when applied to the World Trade Center site, but conveniently evocative for stirring nuclear fears).

The American people, still severely shaken by the attacks of September 11, 2001, would surely be alarmed by such a “threat,” especially if it were linked to terrorism (on the high seas? In the air?), which has been the modus operandi of one administration after another. Aren’t we at war with terror? But it is a strategy – linking nuclear fears with terrorist fears – that the Trump administration may be hoping will cover its lack of evidence with emotional blackmail. But it is a strategy that may not work, since, for some very odd reason, people may prefer facts to fictions. I emphasize “may.”

Perhaps Trump’s neo-con henchmen’s best option, therefore, is to promote or create a Tonkin Gulf incident, “unprovoked aggression against American forces,” as Lyndon Johnson put it when he lied to the world in order to get the war he wanted after JFK had been disposed of by the CIA. It worked in 1964, so it might work again, especially with the help of our special “ally” in the region – Israel. And today’s attackers won’t be aggressors, they will be terrorists, which seals the deal. Bombs away!

It’s hard to say with certainty what justification the Trump war-crazies will settle on, but time is running out for them. The news is bad from every corner, so something must be done.

Many years of secret American/Israeli planning for an attack upon Iran can’t be wasted.

The stage is set. The charade continues. The MSM keep preparing us for the “smoking gun.” Something’s got to give, and propaganda geniuses are working overtime on delivering us an Oscar-winning justification.

Especially since you’ve heard this before, and I’ve written it. With a few minor changes and the substitution of Iran for Iraq, this column was published on the morning before George W’s infamous (the 16 words about uranium from Niger) State of the Union Address on January 28, 2003, fifty-one days before the invasion of Iraq, and one week before Colin Powell’s lies at the United Nations.

Shocked and surprised should be words eliminated from our vocabularies.

BURNING THE PLANET FOR PROFIT (Revisited • A Media Lens exposé)