US wants low-yield nukes to blackmail dissident countries, not to deter Russia – Moscow

We run things from RT.com because we trust them a lot more than the filthy effluvia pouring out of the American media cesspool.
Get short URL 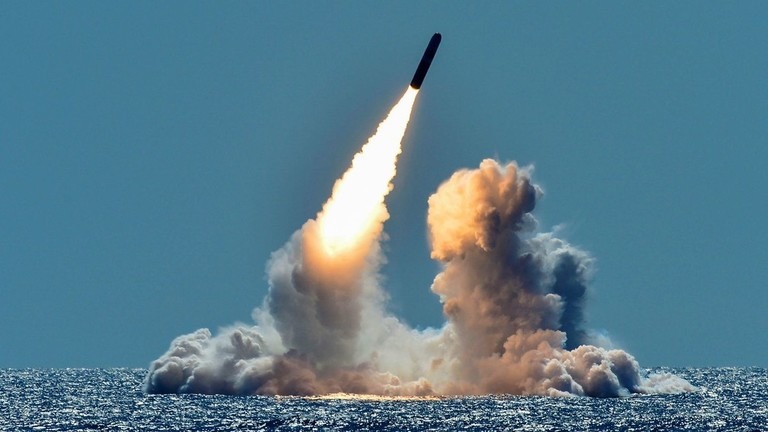 A Trident II D5 missile is test-launched from the Ohio-class US Navy ballistic missile submarine USS Nebraska. © Reuters / US Navy

US generals are well aware that there’s no way of limiting the use of nuclear weapons in a war between superpowers, so the claim that some “low-yield” nukes are needed to match Russia is an outright lie, the Foreign Ministry said.

Moscow’s statement comes in response to the vice-chairman of the US Joint Chiefs of Staff, General Paul Selva, who vehemently promoted the modification of the warheads on Trident missiles, which are carried on Ohio-class submarines, in order for them to be able to carry low-yield nuclear weapons.

But the Russian Foreign Ministry on Saturday blasted the general’s claims as “disingenuous” and pointed out that the use of low-yield nuclear weapons wasn’t even a part of Russia’s military doctrine.

An obvious deception is also the idea that it’s possible to ‘limit’ the use of nuclear weapons in a clash between two nuclear powers.

The yield of an incoming enemy warhead can only be determined after it detonates and the Americans are well aware of that, the ministry said in a statement.

“Therefore, any launch of a strategic nuclear carrier aimed at Russian territory… regardless of the capacity of its warhead, will be treated as an aggression with the use of nuclear weapons, and met with an appropriate response.”

US must show evidence if it wants to claim Russia breached nuke test treaty – MoscowAmerican attempts to turn nukes into “battlefield weapons” have nothing to do with Russia, Moscow insisted.

The US returning to its views “from 60 years ago,” when they believed that a “limited nuclear war” was acceptable and winnable, is a source of serious concerns, the Foreign Ministry said, adding that “this is apparently linked to the growing signs of Washington’s desire to refuse its obligations under the Comprehensive Nuclear-Test-Ban Treaty (CTBT).”

CTBT, which forbids nuclear explosions in all environments, was adopted at the UN General Assembly in 1996. However, the treaty has never gone into force, due to not being ratified by over a dozen countries, including the US.

ARE YOU ENJOYING NEOFEUDALISM YET?
Brought to you by the thieving, sociopathic corporate elites' obscene control of the biggest propaganda machine the world has ever seen.

As Trump Wants To Avoid A Shooting War, Iran Will Use Other Means To Pressure Him