US and UK military sources claim that Iranian boats intercepted a British oil tanker in the Strait of Hormuz Wednesday, before a British warship, the HMS Montrose, chased them off. 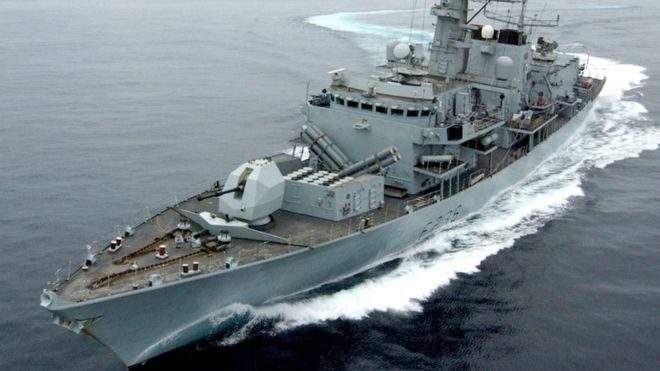 HMS Montrose—supposedly shadowing oil tankers for "their protection". Gunboat diplomacy in the 21st century, and piracy, too. The blatant warmongering and arrogant aspects of Western policy are undeniable.

None of the reports about this incident can be taken at face value. Iran has flatly denied that it took place, and US officials making allegations have not posted videos they claim to have of it. It comes amid a US-led war drive targeting Iran, after Washington unilaterally suspended the 2015 Iranian nuclear accord, launched a major military buildup in the region, and demanded that US allies support it. Yet before anything firm is known about this incident, a press campaign has started in Europe, demanding that the European powers back Washington against Iran.

Wednesday night, European time, US Central Command spokesman Captain Bill Urban accused Iranian Fast-Attack Craft/Fast Inland-Attack Craft (FAC/FIAC) of harassing the tanker. He stated that the Pentagon was “aware of the reports of Islamic Revolutionary Guard Corps Navy's FAC/FIAC harassment and attempts to interfere with the passage of the UK-flagged merchant vessel British Heritage today near the Strait of Hormuz.”

The HMS Montrose “pointed its guns at the Iranian boats,” who then allegedly fled. “It was harassment and attempt to interfere with the passage,” US military officials contacted by Britain’s Independent newspaper said, speaking on condition of anonymity.

Iranian authorities flatly denied the incident took place. Iranian Revolutionary Guard naval forces issued a statement to the Fars News Agency, claiming: “During the last 24 hours, there were no encounters with foreign vessels...”

Iranian Foreign Minister Javad Zarif dismissed the allegations as an attempt by US and European officials to escalate tensions with Iran, telling the ISNA News Agency: “They make such claims to create tension, yet these claims are worthless and they have made many such claims. They say such things to cover up their own weaknesses.”

It is for now impossible to determine what happened Wednesday in the Straits of Hormuz; by all accounts, no shots were fired. However, a push for another military escalation is underway. Despite the unpopularity of Middle East wars and of Trump and his administration among workers in Europe and beyond, and explosive foreign policy conflicts between Washington and the European Union (EU), powerful voices in the European ruling class are demanding Europe back a US war drive against Iran.

Asked whether London would escalate its naval presence in the Persian Gulf, a spokesman at the UK prime minister’s office indicated it would: “We have a longstanding maritime presence in the Gulf. We are continuously monitoring the security situation there and are committed to maintaining freedom of navigation in accordance with international law.”

With stunning hypocrisy, the fact that UK troops acting on US orders seized a tanker July 4 off Gibraltar, allegedly taking Iranian oil to Syria, an act of piracy after which Tehran warned of “repercussions,” is being cited as proof that the US-UK allegations against Iran are credible.

On Tuesday, the US magazine Foreign Policy reported that Britain and France had agreed to a 10-15 percent increase in their troop presence in Syria. This bucked Berlin’s temporary refusal Monday to send more troops to fight alongside US troops working with Syrian Kurdish militias against Syrian President Bashar al-Assad’s regime, which is backed by Russia and Iran.

It added that London and Paris “also expressed interest in contributing to Sentinel, a maritime partnership designed to enhance security for commercial ships traversing the Strait of Hormuz and other choke points.” Both London and Paris declined to comment on this decision, citing the secrecy of special forces operations. Their war drive thus is developing behind the back of the British and French people.

Calls are rapidly emerging particularly in Germany for an about-face on its previous opposition to an escalation in Syria and across the Middle East. After Wednesday’s incident, a wave of articles appeared in the German press calling for Berlin to join the US-led war drive against Iran.

The rottenness of the European ruling class becomes more evident with each passing day, while their media perform the same propaganda functions we see in America.

In a comment titled, “On the Iran question, Europe must back Trump,” Die Weltargued that Berlin should support Trump’s unilateral ripping-up of the 2015 Iranian nuclear accord. “The atomic treaty with Iran was originally correct,” it writes. “But its ostensible goal, to pacify the region, has failed. The regime is more aggressive than ever. So the US president’s critique of the treaty is justified.”

A similar outlook emerged in the Süddeutsche Zeitung ’s comment, headlined, “Europe and Asia must protect trade ships better.” It stated, “Freedom of navigation is a major priority, especially for an export-dependent nation like Germany.” It similarly called for the formation of an international flotilla of warships to patrol off Iranian waters, “even if this plays into US President Trump’s hand.”

The newspaper wrote, “An international flotilla would also internationalize the conflict, which could well be a goal of the US strategy. But that should not be a reason to rule it out. Warships from Europe or Asia would be less provocative for Iran than US or Saudi patrol boats. They would also be a further signal to Tehran, that while Europe also wants to preserve the nuclear treaty, it will not quietly accept the aggressive regional policy of the Islamic Republic.”

The strategies outlined by representatives of the leading European imperialist powers do indeed play directly into the Pentagon’s plans. On Tuesday, the day before the Strait of Hormuz incident, General Joseph Dunford, the chairman of the US Joint Chiefs of Staff, called on US military allies worldwide to join a US-led battle fleet that would surround Iran.

Dunford said, “We’re engaging now with a number of countries to see if we can put together a coalition that would ensure freedom of navigation both in the Strait of Hormuz and the Bab al-Mandab. And so I think probably over the next couple of weeks we’ll identify which nations have the political will to support that initiative, and then we’ll work directly with the militaries to identify the specific capabilities that’ll support that.”

He said the Pentagon would provide “command and control” ships to direct operations. America’s allies would provide escort vessels to follow US command ships’ orders.

Dunford left unsaid that this plan would leave the US Navy with a death grip over not only Iran’s economy, but the oil supply of its main imperialist “allies” in Europe and East Asia, and of Asia’s two most populous countries, China and India.

Such figures lay bare the bitter inter-imperialist struggle for profits and strategic-military influence that have underlain three decades of war in the Middle East since the Soviet bureaucracy dissolved the USSR in 1991. As Trump threatens major Asian and European powers with hundreds of billions of dollars in trade-war tariffs, these tensions are reaching unprecedented intensity. For now, it appears that, fearing a clash with a militarily superior US imperialism, the European powers are deciding to bide their time and abet Washington’s war drive.

This policy, which shows that the EU powers are fundamentally no less predatory than Washington, also exposes the bankruptcy of illusions that workers can rely on rival capitalist powers to restrain Washington from a new, even greater bloodbath. Desperate to seize their share of the plunder, and to continue shoveling hundreds of billions of euros into military budgets despite mounting strikes and protests, the EU powers do not oppose US wars. They respond to US pressure by intensifying their drive to remilitarize and repress protest against austerity and militarism at home.

ABOUT THE AUTHOR
Alex Lantier is a senior editorial analyst with wsws.org, a Marxian publication.

The Lies The Grownups Told Us

Iran Keeps Calm While U.S. And Britain Continue Their Provocations