Home IMPERIALISM Sanctions on Khamenei? Ending the myth of the ‘Millionaire Mullah’ (Part 2/3)

Sanctions on Khamenei? Ending the myth of the ‘Millionaire Mullah’ (Part 2/3) 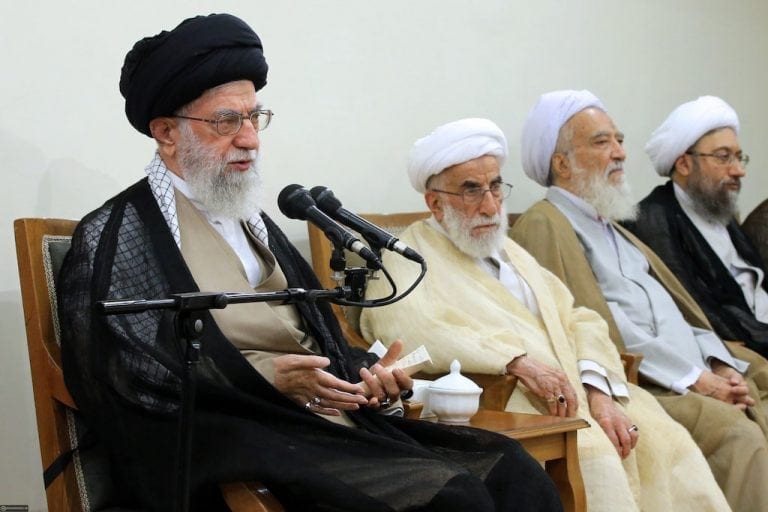 Part 1 of this article discussed why the recent US sanctions on Supreme Leader Ali Khamenei provoked laughter in Iran, and derision even from Iranophobic Western mainstream media.

Beyond Khamenei, I can very briefly explain how and why the West can persist with their “Millionaire Mullah” mythology:

There are many economic principles that guide the Iranian economy which have no basis in the West – they are, after all, “revolutionary”. Many are based on principles of Islamic charity and of Islamic finance; many are also based on anti-capitalist principles which were obviously drawn from 20th century socialism. There are almost too many to list, but in Part 2 of this 3-part article I will pick a few key ones which specifically relate to clergy, and which - when added with Iranophobia - create such widespread and ignorant propaganda.

One of the five pillars of Islam is to give to charity (zakat), but one of the five additional pillars of Shia theology is that businessmen must give 20% of their profits to charity (khums). Thus, it should be clear why some say that Iran has an “alms-based economy”. That’s an exaggeration, because there are state taxes as well, but this money goes directly to religious authorities and has gone there for over 1,000 years.

For example, Khamenei was raised in a family (lower middle class clerics on both sides of his parents) which would have never received this money directly - they would have been the recipients of this charity from much higher-ranking clergy.

Khamenei, through hard work, sacrifice and other virtues, is now a “Marja’” (top religious authority). He now heads various religious foundations which receive – and redistribute downwards – this zakat and khums money.
Of course, he heads these foundations, but this money cannot (and is not) be used by him to buy a Ferrari for his favourite nephew, for example. The Iranian press would die of happiness at the sales prospects caused by such a sensational, unheard-of event! These are “religious foundations” not “The Clinton Foundation”: These foundations serve the poor - they do not trade high-level political access & favours in return for funding a jet-set lifestyle. Of course, most Western media cynically assume that everyone - even a Marja’, and even a Marja’ as publicly present as Khamenei – secretly operates on shameless Western capitalist principles….

Let’s clarify two key issues: zakat and khums are individual choices – they are not compelled to go to Khamenei. Iranians can send their charity to a Marja’ in Iraq if they like, and many do. Secondly, drastically changing this historic process of zakat and khums would certainly constitute a major revolution in Iran - however, for many it would constitute a rather “un-Islamic Revolution”, and there is no doubt that the democratic majority wanted an “Islamic Revolution”.

Therefore, Islamic charity is a reality of modern economics and finance in Iran. It is not something which non-Muslims can easily comprehend, perhaps, but the failure to do so will help fuel nonsense like “Millionaire Mullahs”. Unlike neoliberalism in the West, these financial principles have the virtue of being democratically-supported, and I can easily argue that they have the additional virtue of far more efficiently increasing economic equality than neoliberalism does.

Khamenei, as the Supreme Leader, is also often listed as the head of companies simply out of respect by the company’s founders. It is often purely honorary. Khamenei is not, for example, giving ideas on product improvement or production strategies to such companies (now the rare ex-president Rafsanjani - rare because he was an Iranian Islamic Revolutionary cleric from a rich, business-oriented background might have gotten involved, but Khamenei has evinced no such interest) and he is absolutely not in any control of the company’s assets. He is there in name only as a sign of respect for him, Islam, Iran, etc. Of course, this is distorted/misunderstood by Western pro-capitalist papers.

The Iranian Islamic Revolution also did something which no doubt enrages Western imperialist-capitalists, and about which they have no desire to spread honest information: the revolution took a huge chunk of the factories and industries owned by the shah and his tiny coterie and gave them to charity.

These are called the bonyads, and they are an estimated 15-20% of the entire Iranian economy. A staggeringly revolutionary concept, no?

The bonyads are thus different from the Islamic charity I have described, and the Islamic foundations which administer that charity, because the bonyads were expressly charged with getting involved in economic production.
The bonyads are not designed for capitalist profit, but are co-operatives which exist to create low-cost goods and jobs for Iranians. This planned” inefficiency” – in attaining maximum profit, but not in social cohesion and equality - is falsely branded as “corruption” by raging Western capitalists, sadly.

Western hostility and capitalist blinders pollute any balanced assessment of Iran's "economic way." Here's the Wiki, supposedly a more impartial source, taking some ill-informed potshpts at the bonyad concept. It could have been written (and maybe was, by some disciple) by Milton Friedman:

Bonyad companies also compete with Iran's unprotected private sector, whose firms complain of the difficulty of competing with bonyad firms whose political connections provide government permits and subsidies which eliminate worries over the need to make a profit in many market sectors. These Bonyads, by their very presence, hamper healthy economic competition, efficient use of capital and other resources, and growth.[7]

Khamenei heads some bonyads, and this gives him economic influence, of course… because the popular, democratic, openly-debated decision to award a significant chunk of the Iranian economy to the administration of religious authorities was a popular, democratic, openly-debated decision of the Iranian people. Oppose decisions arrived at in this manner, and you oppose democracy for Iran.

Bonyads are not specifically proscribed in The Koran, unlike zakat and the ubiquitous concepts of charity and anti-usury (high interest/compound interest), but if one tries to overturn them… well, all I can say is – prepare for a serious fight. If you think the millions of bonyad workers and recipients of bonyad lower-cost goods want all that to be replaced by (mostly-Western) stockholders… good luck with your efforts.

Very obvious, but of course not perfect, parallels can be made elsewhere: the lower class supporters of Chavismo’s collectivos have won an unprecedented number of votes (and street battles) to preserve similar anti-neoliberal economic concepts and structures. Iran is not nearly as susceptible to Washington’s meddling, in large part because such gains have been consolidating democratic support for the government for a generation longer than in Venezuela. Iran’s cohesion and unity against capitalist-imperialist destabilisation efforts is not as impressive - pound for pound - as Cuba, which adopted similar (though not Islamic-influenced) concepts a generation earlier than Iran did. China is a generation up on Cuba, and aren’t they doing rather well? China doesn’t have bonyads, of course, but Beijing and Tehran have such a strong and long-term alliance because they obviously have much in common… once translations are made.

So, between zakat, khums, the bonyads, generalized Iranophobia and a desire to denigrate any economic thought which is not far-right neoliberal capitalism… this is how we have arrived at Western nonsense like “Millionaire Mullahs”, and the propaganda is unrelenting.

Like, for example, the 2013 Reuters report on Setad, a bonyad headed by the Supreme Leader post, which was absurdly titled, “Khamenei controls massive financial empire built on property seizures”.

Part 3 will examine this report, which is still being cited today despite its obvious bias, misrepresentations and clear goal of spreading Iranophobic and Islamophobic propaganda.

From Khashoggi to Nicki Minaj: the immoral misadventures of MBS