The dimwits in London who listened to John Bolton and ordered to pirate the Iranian ship are now in deep trouble. It was an utterly stupid move. 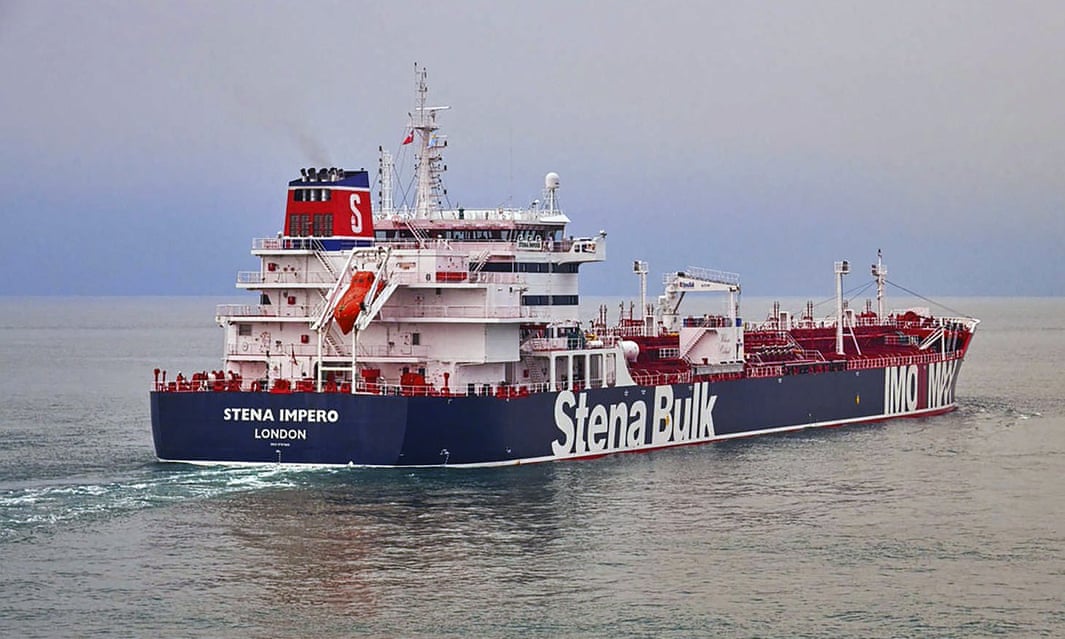 The Stena Impero—Now in Iranian hands. Keeping their promise, the IRGC seized British tankers in just retaliation for the UK's abject acts of piracy.  Not only the imperialist and their vassal dogs can play this game.

On July 4 the Brits used their colonial outlet Gibraltar to steal the Iranian tanker 'Grace 1' and its load of 2 million barrels of oil. The Iranian Revolutionary Guard Corps (IRGC) then threatened to take similar measures against British ships. Today Gibraltar announced that it will hold the 'Grace 1' for another month. We can guess that those plans will soon change. 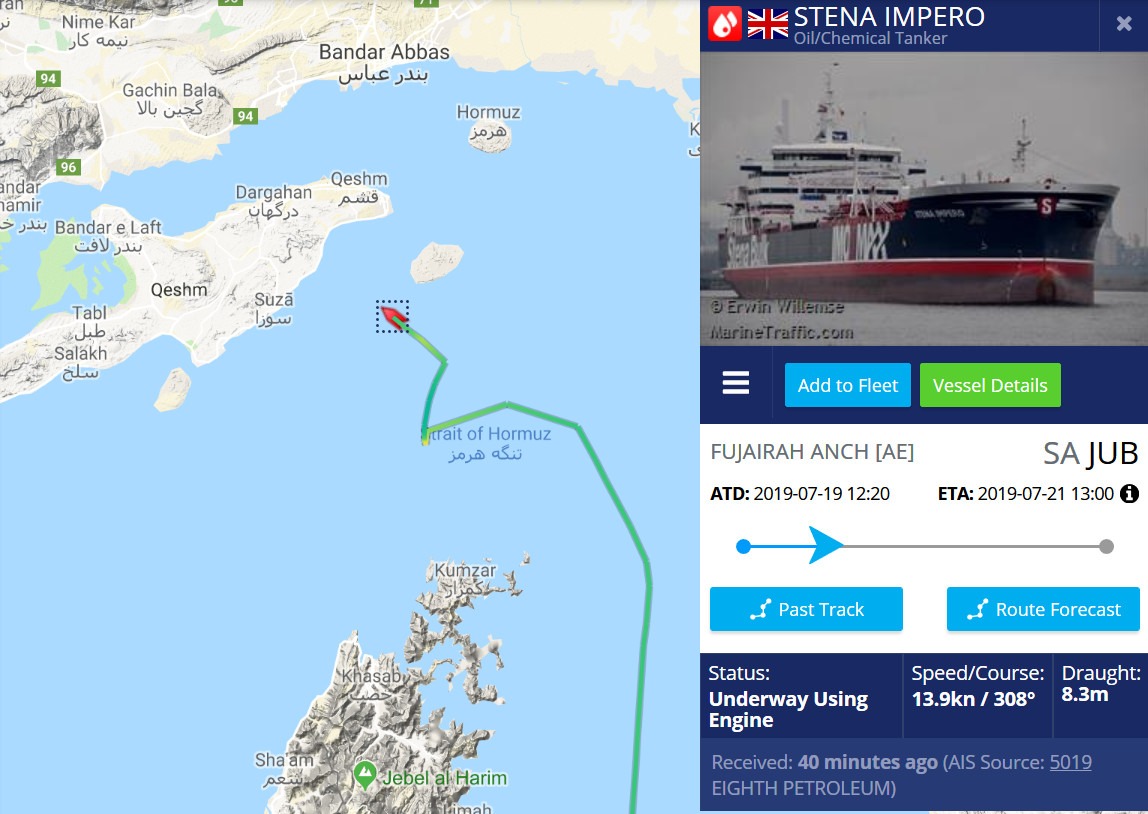 via Marinetraffic
The British tanker 'Stena Impero' was on its way from Fujairah, UAE to Jubail in Saudi Arabia.

Reading the track below we can speculate what happened. Just when the ship had passed through the Strait of Hormuz from east to west it was approached by IRGC fast boats. The ship made a sharp turn south towards Oman but could not outrun the IRGC boots. It was boarded. It then slowed down, made a sharp 180 degree turn and sailed towards north. It is now in Iranian waters. The last Automatic Identification System (AIS) signal it emitted came in at about 17:30 UTC. 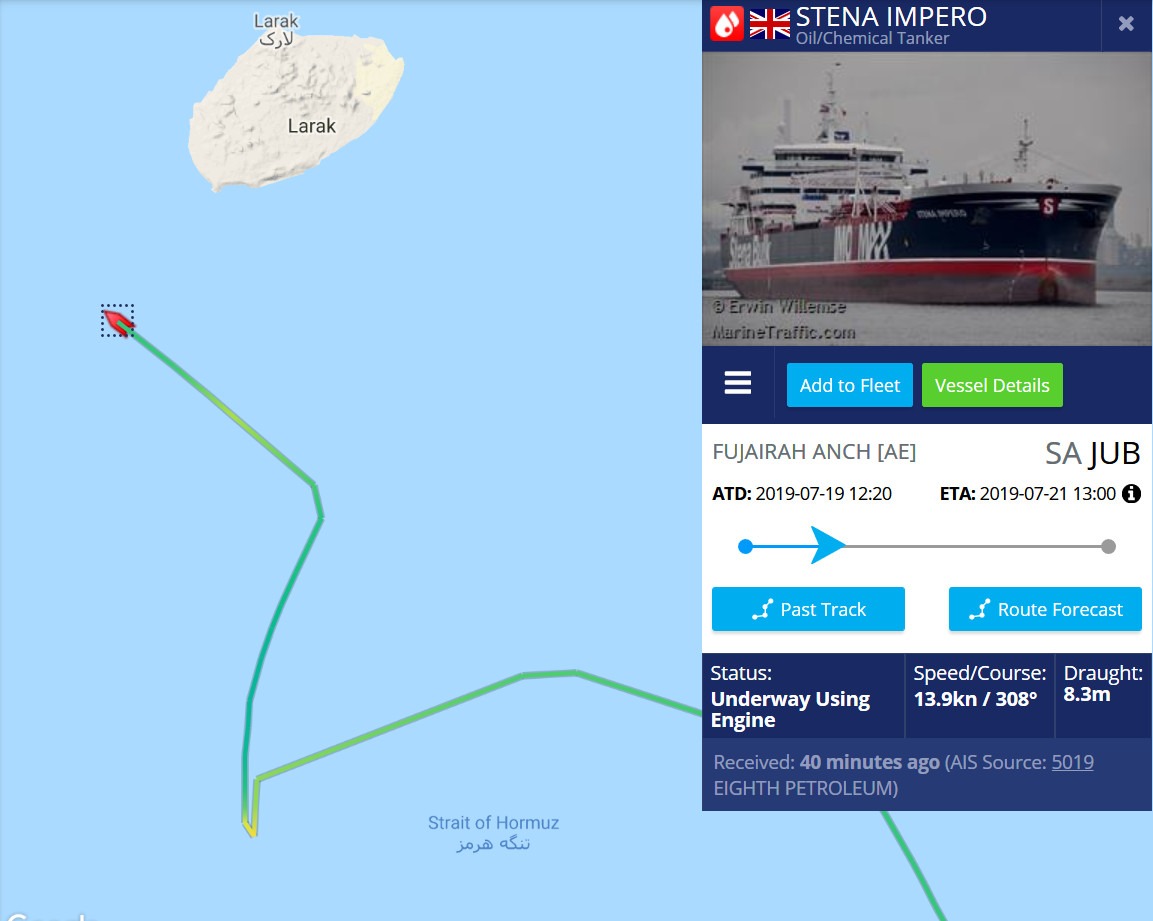 via Marinetraffic
The Stena Impero, IMO 9797400, is a British flagged oil products and chemical tanker. Built in 2018 it has a deadweight tonnage of 49,682 metric tons. The owner is Stena Bulk XIII Cyprus Limited, which is likely controlled by the Swedish company Stena Bulk AB in Goteborg, Sweden. The operator is Northern Marine Ltd in Glasgow, Scotland. The ship sails under the British flag.

The ships' arrest today is another consequence of Trump's idiotic anti-Iran policies which the British minions seem to support. The U.S. tries to build some military escort service for ships in the Strait of Hormuz. But no other country wants to join:

The United States is struggling to win its allies’ support for an initiative to heighten surveillance of vital Middle East oil shipping lanes because of fears it will increase tensions with Iran, six sources familiar with the matter said.
...
“The Americans want to create an ‘alliance of the willing’ who confront future attacks,” a Western diplomat said. “Nobody wants to be on that confrontational course and part of a U.S. push against Iran.”
...
The British security source said it was not viable to escort every commercial vessel, a view shared by several other countries.
...
“It’s just impossible. The Strait is already too crowded,” an Asian official said of an escort system in the Strait of Hormuz which is 21 miles (33 km) wide at its narrowest point.

The dimwits in London who listened to John Bolton and ordered to pirate the Iranian ship are now in deep trouble. It was an utterly stupid move. There is little they can do now except to let the 'Grace 1' go. But who in Britain can now give the order? Theresa May is about gone and Boris Johnson is still busy collecting votes to become the next prime minister.

Added: The IRGC now confirmed that it took the ship:

The IRGC Navy announced in statement that British oil tanker “Stena Impero” has been captured on Friday evening because of violating the international maritime regulations when crossing the Strait of Hormuz.The UK oil tanker has been seized by the IRGC Navy forces in the first naval zone at the request of the Ports and Maritime Organization of Iran at the province of Hormozgan, a statement said.

The British vessel has been taken to the port and delivered to the Ports and Maritime Organization for the legal and judicial processes, it added.

Another ship seems to have "violated international maritime regulations". The 'Mesdar', IMO 9452672, passed east to west through Iran's territorial waters north of Abu Musa island when it suddenly made a 90 degree turn and sailed north towards the Iranian coast. 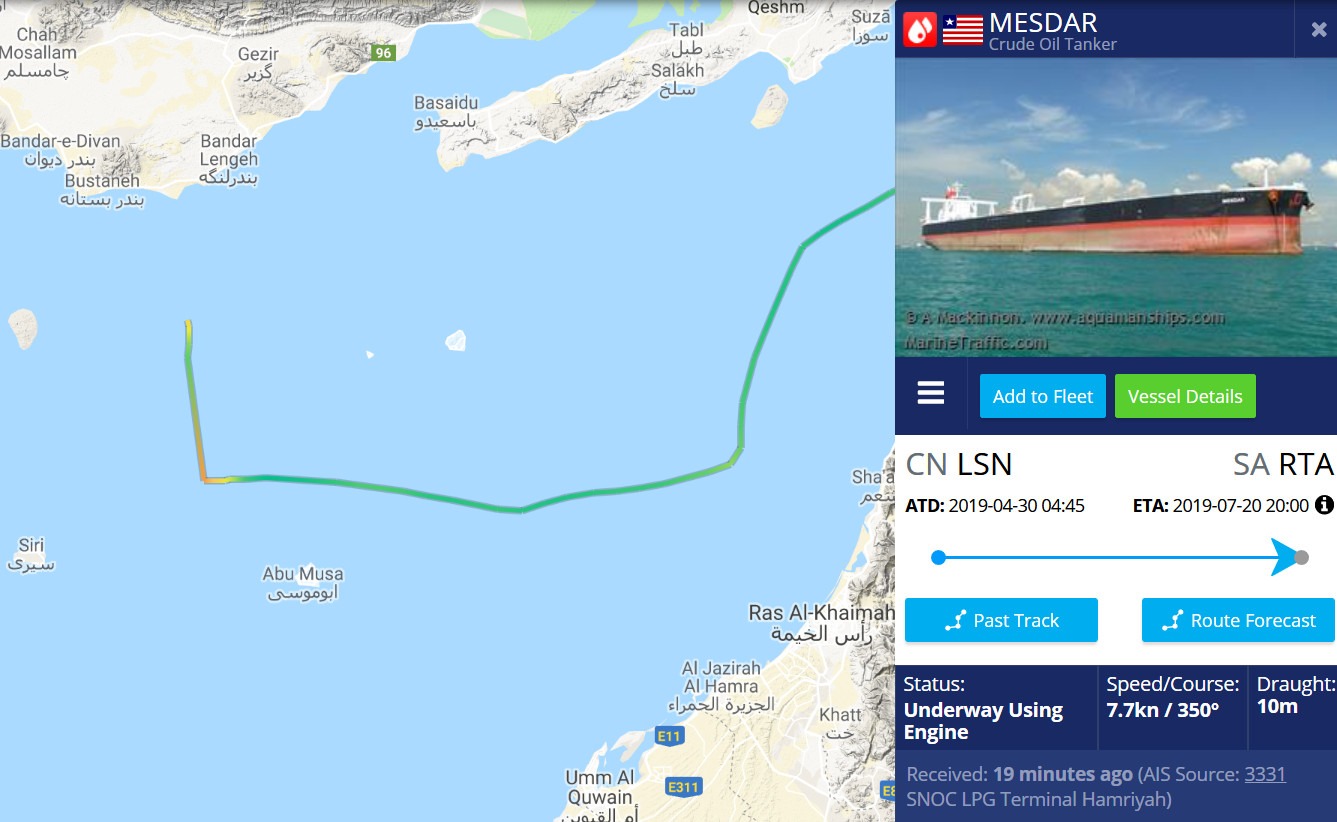 via Marinetraffic
With 333 meter length and 60 meter breadth the Liberian flagged ship is a very large crude oil carrier. It has a deadweight tonnage of 315,802 tons. The ship came from Lanshan, China and was supposed to go to Ras Tanura in Saudi Arabia. The last AIS signal from the ship was received at 17:30 UTC. The manager/operator and owner(?) of the Mesdar is Norbulk Shipping Ltd in Glasgow, Scotland.

The IRGC let the 'Mesdar' go after reminding her of the relevant rules. The ship has turned southwest to continue its planned voyage.

About the Author
These dispatches are filed by Moon of Alabama's editor in chief, who uses the nom de guerre "b".

Inside the Yellow Vests: What the Western media will not report

Inside the Yellow Vests: What the Western media will not report (Part 3)

Mexico Willing to Help Venezuela With Oil Upon...