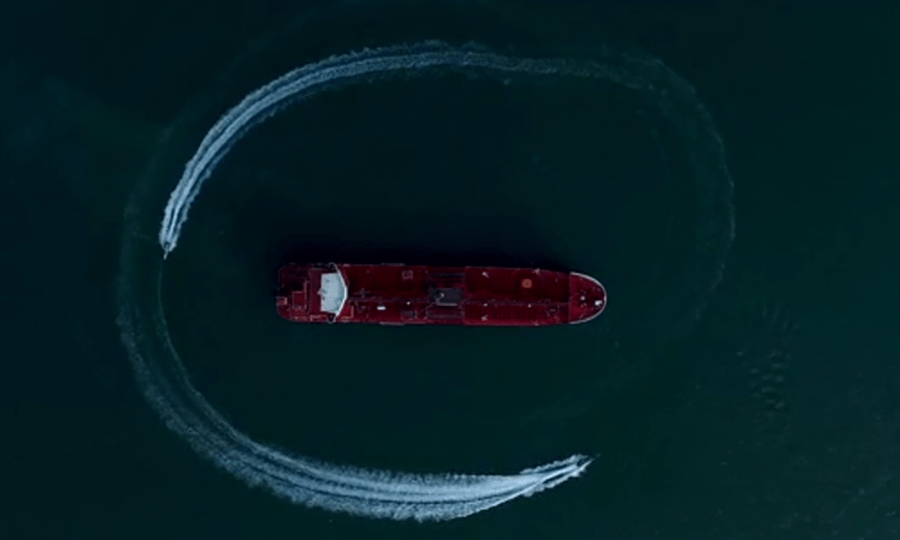 If there was any doubt remaining that Britain has ceased to be a colonial power capable of imposing its will in foreign seas on command, it was evident this weekend, as Iranian naval vessels ran literal rings around a detained British oil tanker.

Drone footage released by Iran’s Fars news agency on Saturday showed a bird’s-eye view of the UK’s Stena Impero, moored in the port of Bandar Abbas after its seizure by the Islamic Revolutionary Guard Corps (IRGC). In the video, a pair of Iranian boats speed in circles around the tanker to the soundtrack of heavy metal, in a show of force likely designed for domestic as much as regional and global consumption.

In the past 24 hours, a leaked audio recording laid bare the failed attempt by the British Royal Navy to avert the impounding.

“Alter your course, do 360 degrees immediately, over,” an Iranian officer is heard telling the crew of the UK oil tanker Stena Impero on Friday. “Obey, and you will be safe.”

A British warship, despite being too far away to pose an immediate threat, then issues a competing directive, telling the commercial ship it should continue on its path.

“Stena Impero, this is British warship, Foxtrot 236. I reiterate that you are conducting transit passage in a recognized international strait. Under international law, your passage must not be impaired, obstructed or hampered,” the British officer says, before the vessel is forced to Iranian shores.

The veracity of the recording, released by maritime security risk consultancy Dryad Global, has not been challenged by the UK or Iran.

The raid itself – videotaped and published by the Iranian Revolutionary Guard Corps – shows Balaclava-wearing commandos descending on the British tanker by helicopter. The seizure appeared designed to replicate Britain’s impounding of an Iranian tanker earlier this month.

Asked on Monday what the United States would do to help retrieve the vessel of its ally, US Secretary of State Mike Pompeo appeared to wash his hands of the incident.

“The responsibility in the first instance falls to the United Kingdom to care of their ships,” he told Fox and Friends. The UK – in the midst of messy talks to leave the European Union – said on Monday it was looking to its European allies to help secure Persian Gulf shipping.

Saudi Arabia, Iran’s regional arch-foe, appeared to quickly absorb the severity of the situation, releasing an Iranian oil tanker on Saturday which Tehran for weeks had accused Riyadh of illegally detaining. 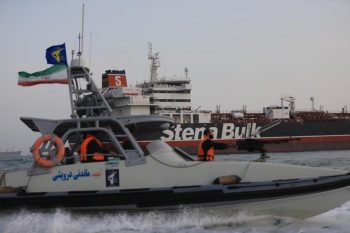 Iran’s senior commanders say the country has officially moved from a position of deterrence to one of calculated confrontation.

“We have put aside the defensive approach to also develop an offensive approach,” the lieutenant commander of Iran’s ground forces told a gathering in the city of Shiraz on Monday.

“Some while ago, we were only after deterrence but today other countries should develop deterrence against us,” added General Nozar Nemati.

Another senior commander, Major General Gholam Ali Rashid, told an audience in Tehran on Monday that Iran’s military would henceforth be practicing a “firm and smart confrontation against threatening attitudes and hostile measures.”

The statements appeared to enshrine in policy a months-long pattern of tit-for-tat responses against US attempts to choke off Iranian oil exports.

“The British committed piracy and we responded to it,” Iran’s parliamentary speaker Ali Larijani said on Sunday, directly linking the seizure of Britain’s Stena Impero to Iran’s Grace I tanker. Tehran had previously cited alleged technical violations as grounds for the detention.

The Grace I was impounded by the Royal Navy off the coast of Gibraltar, a UK territory, on July 4. London accused Iran of attempting to export its crude to the Syrian refinery of Baniyas, in violation of European Union sanctions, and said that the ship’s entrance into the waters of Gibraltar provided jurisdiction.

Iran said its oil was destined for a legal destination, and quickly vowed retaliation. The United Kingdom, according to its former navy chief, should have seen the seizure of one of its own vessels coming.

West chastised his government for failing to protect British shipping in the Strait of Hormuz, through which 30% of the world’s seaborne oil passes:

“We should have enacted control of shipping procedures, directing ships to assemble in safe areas and then taken them through in convoy,” he wrote. “Even with only one major warship in the Gulf this could have been done until reinforcements arrived – although the Royal Navy is disgracefully short of ships.”

A military response, he said, would not only be inappropriate, but beyond the capabilities of Britain acting alone.

The UK now risks becoming embroiled in an open conflict with Iran – a risk that should be the first priority of the incoming leader to address, he concluded.

CODA
We spotted an interesting question on Quora...
What are some things many Americans believe about the rest of the world that are actually completely false?
Answer · Recommended for you.
BACKGROUND: Constantly pumped up by the media and prostituted politicians, unrestrained narcissisim—which fuels rabid jingoism—is America's near universal psychological disease. Few things can be corrected in a climate of constant self-delusion, as any criticism can be immediately denounced as being "unpatriotic," as the First Oaf is currently claiming in his cynically manufactured spat with the Democrats' female "Squad".

That everyone admires and respects the US—
and,

Let‘s be clear: in this era of CNN and Fox and MSNBC, it is more accurate to see Americans as holding competing narratives than false beliefs. [Editor's Note: BOTH competing beliefs can be and are in fact false, since all mainstream media engage in constant lying and disinformation on behalf of the plutocracy. US journalists, as a rule a medicre and ignorant lot, as brainwashed as the next American, and whether fully aware of their role or not, are insanity stokers.]

The United States has a severe media problem. That is why we have one political party convinced that the world will end in 120 months if we don‘t get control of greenhouse gas emissions and another that believes that it is all an anti-capitalistic hoax. The whole damn country is insane.

(The above is an entry from Quora.)

About the author(s)
Alison Tahmizian Meuse is contributing editor for Syria Deeply.

Hubris Before the Fall