India Will Come To Regret Its Annexation Of Jammu And Kashmir

August 12, 2019
Please make sure these dispatches reach as many readers as possible. Share with kin, friends and workmates and ask them to do likewise. 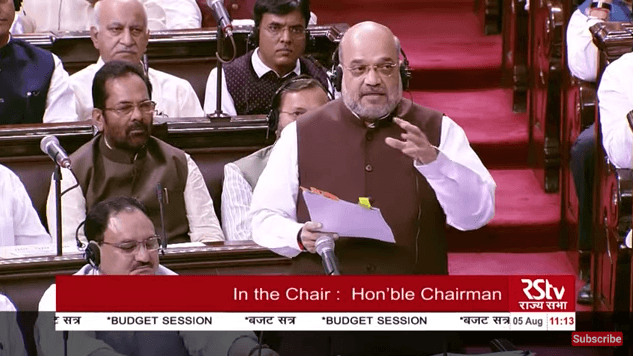 [dropcap]T[/dropcap]he right-wing nationalist Hindutva government of India under Prime Minister Narendra Damodardas Modi just revoked autonomy for Jammu and Kashmir. This will create a civil war that could easily evolve into new conflict between the nuclear armed India and Pakistan. 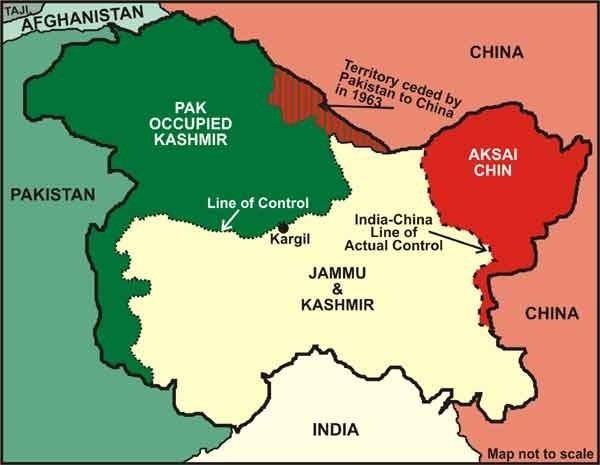 Jamma & Kashmir
A bit of history is necessary to understand the issue:

At the time of the British withdrawal from India, Maharaja Hari Singh, the ruler of the state, preferred to become independent and remain neutral between the successor dominions of India and Pakistan. However, an uprising in the western districts of the State followed by an attack by raiders from the neighbouring Northwest Frontier Province, supported by Pakistan, put an end to his plans for independence. On 26 October 1947, the Maharaja signed the Instrument of Accession joining the Dominion of India in return for military aid. The western and northern districts presently known as Azad Kashmir and Gilgit-Baltistan passed to the control of Pakistan, while the remaining territory became the Indian state Jammu and Kashmir.

The Instrument of Accession was limited to certain issues. It did not dissolve the autonomous state:

The Instrument of Accession signed by then-Maharaja Hari Singh of Kashmir in October 1947 specified only three subjects on which the state would transfer its powers to the Government of India: foreign affairs, defence and communications. In March 1948, the Maharaja appointed an interim government in the state, with Sheikh Abdullah as the prime minister. The interim government was also tasked with convening a constituent assembly for framing a constitution for the state. In the meantime, the Constituent Assembly of India was conducting its deliberations. In July 1949, Sheikh Abdullah and three colleagues joined the Indian Constituent Assembly and negotiated the special status of J&K, leading to the adoption of Article 370.This article limited the Union’s legislative power over Kashmir to the three subjects in the Instrument of Accession. If the Union government wanted to extend other provisions of the Indian Constitution, it would have to issue a Presidential Order under Article 370. The state government would have to give prior concurrence to this order. Moreover, the constituent assembly of J&K would have to accept these provisions and incorporate them in the state’s constitution. Once Kashmir’s constitution was framed, there could be no further extension of the Union’s legislative power to the state. This secured J&K’s autonomy.

Incidentally, this was the reason for listing the provisions of Article 370 as “temporary” in the Indian Constitution: the final contours of the state’s constitutional relationship with the Union were to be determined by the constituent assembly of J&K.

Today Amit Shah, the leader of India's Upper House, announced the unilateral revocation of Article 370 (and the related Article 35a). 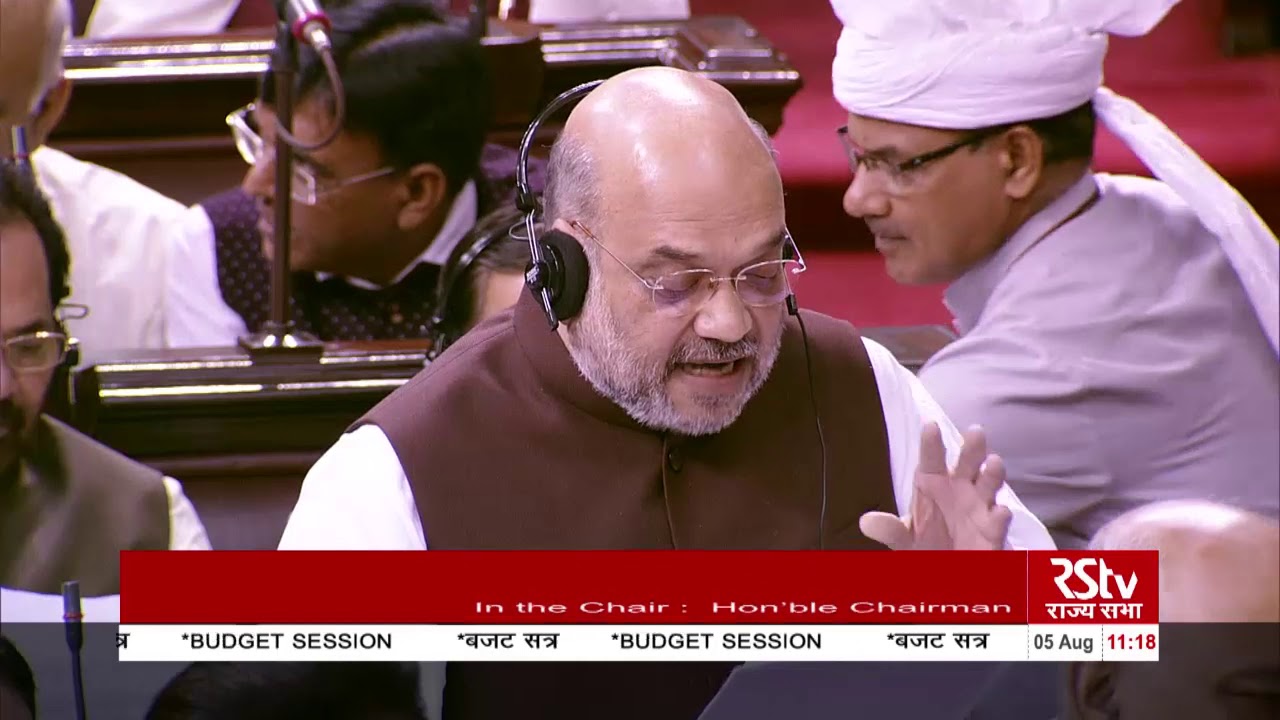 Home Minister Amit Shah announced that the government has issued a notification in effect scrapping Article 370 from the Indian Constitution. Article 370 of the constitution is a ‘temporary provision’ granting special autonomous status to Jammu and Kashmir.Furthermore, the government also ordered the division of Jammu and Kashmir into two Union Territories. While the Union Territory of Ladakh will be without a legislature, the Union Territory of Jammu and Kashmir will be with a legislature. “We have four bills on Kashmir. We are ready to discuss everything and give answers on everything,” Shah said, amid chaos in Rajya Sabha.

The move created an uproar (vid, above) in the parliament.

J&K is majority Muslim. It is of strategic importance as the headwaters of Pakistan's main water source, the Indus river system, are situated in J&K's mountains. Pakistani nationalist believe that it should be part of their state. 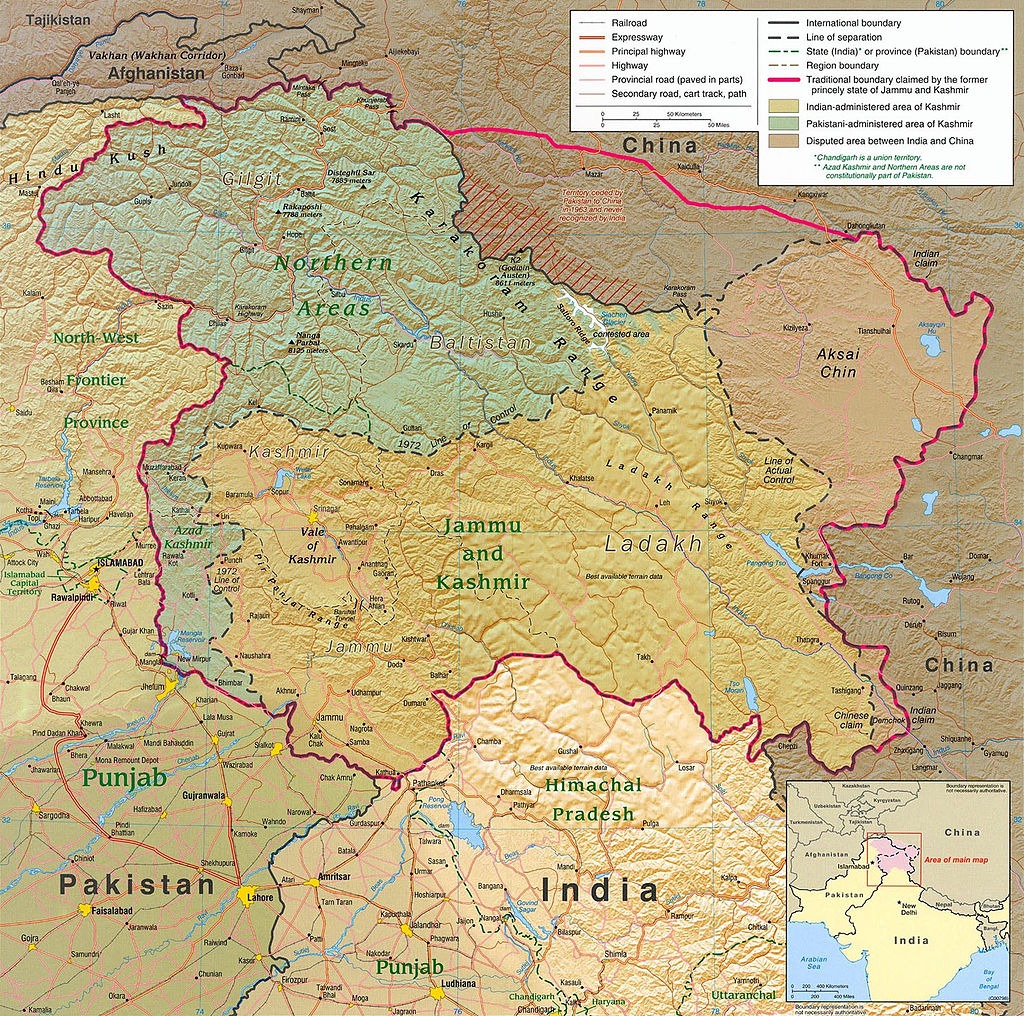 Jamma & Kashmir. They say geography is destiny, or curse, they may be right.

When the U.S. incited and supported Muslim extremists to attack the Soviet Union in Afghanistan, the movement spilled over into Pakistan and J&K. During the 1980s and 90s a Muslim insurgency, supported by Muslim Pakistan, fought against Indian soldiers. Hindu inhabitants of J&K were pushed out. The 12.5 million inhabitants of J&K are since under Indian occupation. Between 500.000 and 700.000 Indian soldiers are stationed in the state. During the last decades the conflict largely ceased and there were recently not big incidents. Up to today Pakistan had no current interest in escalating the issue.

But the fascist Modi government, just recently reelected, needs to feed its radical Hindutva base. J&K's special status protected its inhabitants from overwhelming migration of Hindus from main India. Modi will now push his followers to move into the state. His aim in the end is to create a majority Hindu state in a currently majority Muslim one.

Last week India ordered all tourists to leave J&K. Since yesterday all communication lines to J&K are cut. Local leaders were put under house arrest and all schools and public institutions are closed. Thousand of troops were additionally sent into J&K.

It is inevitable that the actions today will lead to a new insurgency in J&K and beyond. Even if Pakistan's Prime Minister Imran Khan does not want to support a new guerilla army in J&K, the military and other nationalist Pakistanis will push to supply it with everything that is needed.

This prediction is likely to come true:

1. [..] I feel reasonably comfortable making the following prediction: strictly seen from the perspective of maintaining the current territorial status quo in Kashmir, the Indian state will come to regret this decision within a decade. Even if it holds on to the state in its entirety, it just made its job a lot tougher and costlier. I also think it has opened up wiggle room -- diplomatically and legally -- that did not exist before.2. Relatedly, I believe no institution is happier today than [Pakistan's Military General Headquarter]. No, not even the RSS or Times Now or Republic TV. Congrats to Modi and Amit Shah for doing more for Pakistan's position than anyone in Pindi could have hoped for. There's a dissertation and a half waiting to be written on popular right wing nationalism at home leading to dumb and overreaching shit abroad (I can think of some recent cases).

3. Anyone in Delhi or DC or on anywhere else who tries to pin this on any "external threat" should never be paid attention to again. Trust me, I'm more than aware of the times when Pakistan's behavior has been key to how India behaves in Kashmir, but this time ain't it.

The Indian Express has live update of the situation. The Dawn from Pakistan also provides live coverage.

As you say, B, it seems that Modi hopes to replicate in Jammu-Kashmir what China has been doing in Tibet. Still, they have to be bonkers to do this. Resistance, guerrilla and open rebellion are the most probable outcomes. Besides, elections are over. There's no political need to do this now; it would've been more politically appropriate a few months ago. This won't end well and many, in J-K, India and Pakistan, will suffer for it.

No! Moon of Alabama sir, India had state troops from Patiala and RSS paramilitaries present in Jammu and Kashmir far before its never-proven acquiring of the 'Instrument of Accession' and they were helping conduct pogroms for the same reason the current scrapping of the special status for Occupied Kashmir has been done: demographic change in favour of Hindus.
Saeed NaqviWhat was the death toll in the killing fields of Jammu? There are no official figures, so one has to go by reports in the British press of that period. Horace Alexander’s article on 16 January 1948 in The Spectator is much quoted; he put the number killed at 200,000.To quote a 10 August 1948 report published in The Times, London: “237,000 Muslims were systematically exterminated – unless they escaped to Pakistan along the border – by the forces of the Dogra State headed by the Maharaja in person and aided by Hindus and Sikhs. This happened in October 1947, five days before the Pathan invasion and nine days before the Maharaja’s accession to india.” Reportedly, as a result of the massacre/migration, Muslims who were a majority (61 per cent) in the Jammu region became a minority.Mountbatten was in control in Delhi and had news of the genocide of Muslims in Jammu filtered out of the media. Sadly, there has been precious little discussion in India about this horrible phase of history.'https://scroll.in/article/811468/the-killing-fields-of-jammu-when-it-was-muslims-who-were-eliminated

Please be wary with Hindu victimhood propaganda. Read the following well sourced article on 'Kashmir: Exposing the myth behind the narrative' by Khalid Bashir who documents using primary sources that the 'Hindi Pandits expelled from Kashmir by evil Muslims' part is bullcrap Indian propaganda. And propaganda which at the time served to scare Hindu Kashmiri Pandits into fleeing their areas so a calculated crackdown could be launched on Kashmir's uprising Muslims.

The 'Hindu victimhood' BS is a lie. The Pandits were scared by the Indian imposed Governor of the time, Jagmohan Malhotra, into believing the rising anti India fervour would target them. This link provides several first hand sources which testify to the contrary happening, i.e to killings by freedom fighters targeting both Muslim AND Hindu if they were seen to be collaborators with the Indian occupier: https://lostkashmirihistory.com/exposing-the-kp-exodus/

India wanted the Hindu Pandits fleeing so that Muslim-only zones could be made and Muslims eliminated. Malhotra even claimed as such openly. He said 'every Muslim is a separatist' and said they'd all be targeted.

Please understand the demented state that India is (in).

About the Author
"b" is Moon of Alabama's founding edito's nom de plume.