As the Amazon burns, wars loom, and climate change accelerates, the media continues its grand betrayal

Collated and annotated by Patrice Greanville
SNAPSHOPTS FROM THE MOST IMPORTANT BATTLE OF COMMUNICATIONS IN HISTORY. ONE THAT ORDINARY PEOPLE CANNOT AFFORD TO LOSE. EITHER WE WIN, OR WE DIE. AND EVERYTHING ELSE LIVING DIES ALONG WITH US. 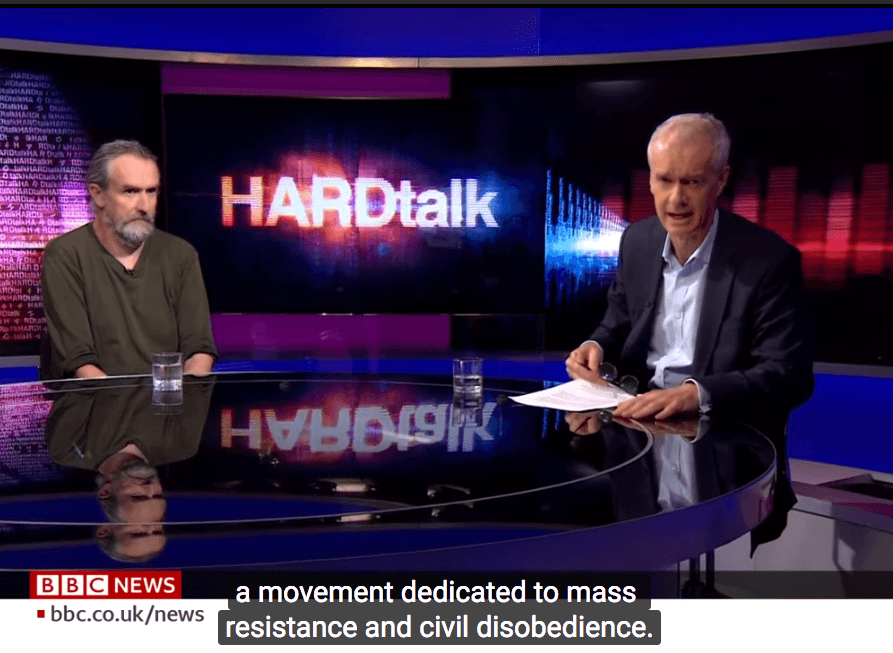 Here's the BBC, world icon of establishment mass communications, represented by Stephen Sackur, an overpaid stuffed shirt of a presstitute that reminds us of our Charlie Rose, imperturbably trying to punch holes and denigrate what XE's Roger Hallam is trying to say. As a YT commenter eloquently says, "The media is not our friend." While Hallam is quite clear that our way of life—read, ruthless capitalism and faux democracy—have to go if we are to stand a chance at turning things around, the BBC host tries his devious best to poo poo the idea of rapid changes, let alone changes that would involve a deep disruption "of the economy" and the West's pioneered consumerist way of life (capitalism).—PG

Roger Hallam talks with Stephen Sackur from BBC HardTalk about the need to ACT NOW.
The questions the interviewer asked and the way he asked then were plain embarrassing. What a joke. Not sure how Hallam held his temper. Fair play to the man.

Sackur speaks that way to everyone. That's why it's called HardTalk. Hallam handled it well.

XR need to sharpen their hostility. The media is not their friend. Give them hell.

@Brian Smith he did. This prevalent style of interviewing pisses me right off. What's the point, just prodding around with sneers and personal attacks - ignoring the actual hard facts of the science. What do they expect people to learn?

Amazon forest fire: What it tells us about deforestation

Here we have an academic who sounds (like most academics do) reasonable and balanced," but who is in actuality neither, when we realise the context of his remarks, and his allegiance, witting or not, to the corporate status quo.  For one thing, all meat production—especially in its industrial forms— is a major contributor to global heating. It should not be accorded respectable treatment but outright condemnation. This man fails to recognise that "business as usual" cannot go on; that the planet in this age of acute crisis detonated by an immoral capitalism MUST at the least have sanctuaries from capitalist exploitation. And an obvious place is the Amazon rainforest, one of the planet's biggest carbon sinks, helping to capture massive amounts of CO2 otherwise released into the atmosphere with its usual damaging greenhouse effect. Looked through a rational and moral prism, not one calibrated by the very system that has caused this crisis, it is irrefutable that destroying the Amazon rainforest, with its plethora of plants (many essential for medicine, among other things), and precious fauna, not to mention indigenous people, is a crime, not just another economic option to be contemplated in the name of "economic development", the usual misleading mantra brandished by economists, politicians, pundits, and "experts" who would like us to believe endless economic growth in a finite planet is not just a feasible path, but the recipe for social happiness. What the world needs is a steady state economy, with gradual shrinking of consumption.  Obviously that is impossible within the framework of global capitalism, in a planet dominated by puny, obscenely rich and sociopathic elites (0.0001% of the population) who will put up a fierce resistance to any tweaking, let alone major restructuring, of the malignant system that made them into modenr royalty. In sum, when it cmes to the Mato Grosso, what we all need is not a "balanced" approach between the needs of the environment and economic development, as the good professor recommends, but a policy of no development of the Amazon, period. Especially when we speak of logging and other highly pernicious extractive industries, or the extension of ranching and animal farming to supply international meat markets.—PG

BETRAYERS: The Liberaloid Media
Reporting the effects of capitalism and imperialism, but hiding them from criticism.

Liberals are famous for being excellent at describing a social problem caused by capitalism, but also notorious for their woefully inadequate prescriptions. It's the "diagnose cancer and recommend aspirin" maneuver.  (Conservatives, of course, rarely recognise there is even a problem).  In this case, CNN's correspondent Nick Paton provides gripping proof of the Amazon's wanton destruction, but he fails completely to identify the actual culprits: a savage capitalism that sees the Amazon as simply another "resource" to be exploited to the bitter end; a new leader—Jair Bolsonaro—who is s brutal fascist deliberately encouraging "the economic development" of the Amazon—read: massive deforestation, pleasing his ranching, logging, and mining cronies—and, last but not least,  the tacit support given Bolsonaro by the international media and the US, of course, which applauded and actually facilitated Bolsonaro's coming to power via a "judicial coup". Paton is also silent about the ludicrous—insulting is a better word—sum pledged by the rich European Union to combat the crisis, a piddling USD22 million, which is cigarette money around the Pentagon, and a pittance by the income standards of just one billionaire, Jeff Bezos, whose firm, Amazon, is valued at over 1 trillion dollars. (On this topic, see Umir Haque's Saving The Amazon’s Only Worth $20 Million — But Amazon, Inc is “Worth” $1 Trillion. What The? Amazing how these people always manage to avoid saying the obvious. —PG

Flying above the Amazon fires: 'All you can see is death'

France and the UK have pledged emergency funds to help countries affected by the fires in the Amazon rainforest. CNN's Nick Paton Walsh flew over the devastated area in Rodonia, the Amazon's worst afflicted state, and filed this report.

* Pushback with Aaron Maté * Glenn Greenwald of The Intercept discusses the record-setting Amazon forest fires, the struggle against Brazil's far-right government, and how his reporting revealed to the world how all of this came about: a high-level plot that imprisoned Lula da Silva and prevented him from running in the last presidential election. Guest: Glenn Greenwald, co-founder of The Intercept and Pulitzer prize-winning journalist. (Find more reporting at https://thegrayzone.com )


The Notre Dame fire was reported in minutes, the Amazon rainforest has been on fire for 3 weeks. We take a look at why it took so long to report the Amazon rainforest fires. Officials have said theAmazon rainforest is burning at a record rate and not only that but it's been happening for over 3 weeks. When this news was announced many people started to ask the same question, why wasn't it reported. When other fires have happened in the past, for example the Notre Dame fire, it has been on the news within minutes.

The Amazon isn't "Burning" - It's Being Burned

This is a thing that is happening right now, and (taking a page from the global warming playbook) a think I've been hearing from Bolsonaro's supporters is, "Who even knows how bad it is...deforestation is actually down."