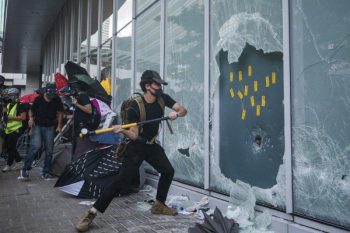 How much does it cost to mount Hong Kong’s color revolution?

Online reports are coming in on the tallies … and the various numbers roughly converge. Here is a composite accounting for the core elements:

That’s a small sum to the funders of the turmoil. After 13 weeks, it can be said confidently that the bulk of the cash comes from three sources:

1) The US Empire -- NED, Soros, etc. Turmoil in Hong Kong is a major prong of Washington’s worldwide, multi-front war on China, along with Xinjiang, Tibet, Taiwan, trade, tech -- you name it.

2) Taiwan’s ruling DPP. The perceived failure of One Country, Two Systems in Hong Kong would boost the reelection chances of incumbent president English Tsai in the election early next year.

3) Corrupt mainland Chinese tycoons and officials taking refuge in Hong Kong, for whom passage of an extradition law could be a mortal threat. They have huge piles of cash stuck in HK, with little to spend it on. They could be joined by rich Hong Kong folk fearful of extradition to the mainland for various reasons.

Since the extradition bill has been rescinded, the third group has little reason to continue their monetary backing. Perhaps that helps account for the reduced frequency and intensity of blackshirt violence since the bill's formal withdrawal a week ago.

ABOUT THE AUTHOR
The author is a veteran journalist based in Hong Kong. He contributes to 21SilkRd on Facebook.

Kidnapping as a tool of imperial statecraft?