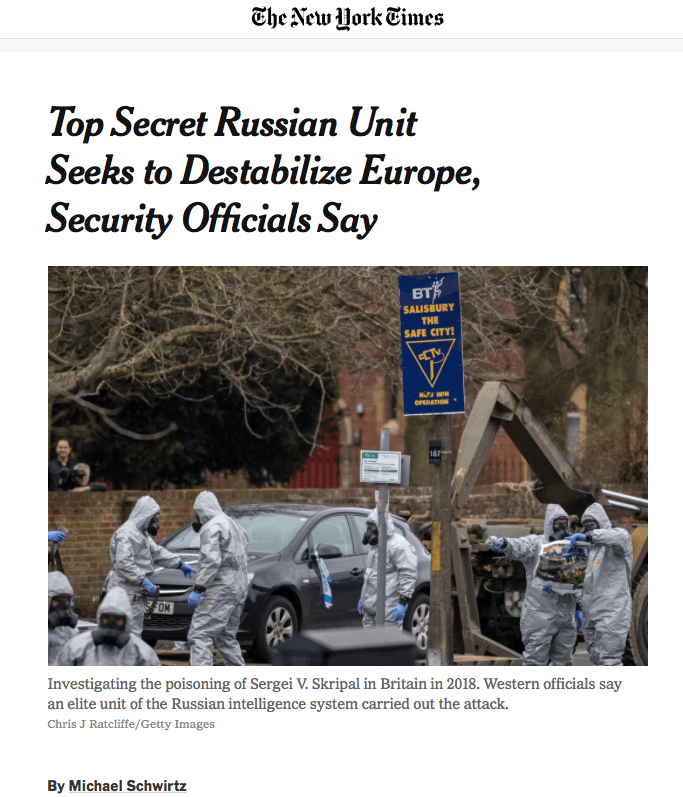 ABOVE: The New York Times shamelessly using one lie as a platform for another lie. All the disinformation that's fit to print.

Two days ago the New York Times published a sensational story [by Michael Schwirtz] about alleged Russian fiendishness. It was headlined:

According to the story unit 29155 of the Russian military intelligence service GRU is responsible for the Skripal affair in Britain, the attempts to murder a Bulgarian arms dealer, a failed coup attempt in Montenegro and a 'destabilization campaign' in Moldavia. All those alleged operations have a common aspect. They failed to achieve their alleged objective. But the NYT piece does not emphasize that. It instead raises a very scary picture:

Western security officials have now concluded that these operations, and potentially many others, are part of a coordinated and ongoing campaign to destabilize Europe, executed by an elite unit inside the Russian intelligence system skilled in subversion, sabotage and assassination.

The group, known as Unit 29155, has operated for at least a decade, yet Western officials only recently discovered it. Intelligence officials in four Western countries say it is unclear how often the unit is mobilized and warn that it is impossible to know when and where its operatives will strike.

The purpose of Unit 29155, which has not been previously reported, underscores the degree to which the Russian president, Vladimir V. Putin, is actively fighting the West with his brand of so-called hybrid warfare — a blend of propaganda, hacking attacks and disinformation — as well as open military confrontation.

The author, Michael Schwirtz, promoted the story on Twitter:

Michael Schwirtz @mschwirtz - 15:57 UTC · Oct 8, 2019
The Russian operatives who poisoned Sergei Skripal with a nerve agent in Britain last year were members of a highly secretive spy unit that until recently was unknown to Western intelligence agencies. My latest dive into Russian spycraft.

"Western officials only recently discovered" the "highly secretive spy unit". One wonders how they did that. The best guess is that they googled it:

Leonid Ragozin @leonidragozin - 1:31 UTC - 9 Oct 2019
One of Russia’s most prominent investigative journalists, Sergey Kanev, says there is nothing super-secret about unit 29155 of GRU which NYT reported on yesterday. When you google, the unit’s address and commander’s name pop up on numerous yellow pages type sites.

“If you searched the Internet better, you’d find his [commander Averyanov’s] home address, dacha near Istra and his car’s number plate. There is even his mobile phone, which you could call”, Kanev asks.

The GRU military unit of military unit 29155, which was named in the publication of The New York Times by the secret elite unit of the GRU, which is destabilizing the situation in Europe, is an ordinary intelligence training course. Vedomosti was informed about this by a former intelligence officer and a person close to the intelligence agencies.
...
According to a person close to the special services, military unit 29155, also known as the 161st training center and located in the Moscow district of Izmailovo (in the east of the city), is short-term military intelligence training courses that have existed since the Soviet Union, where its military personnel improve their skills in shooting training, radio communications and other special disciplines - unlike the Military Diplomatic Academy, where scouts receive fundamental training. Judging by the information on the website on the history of special services “History of Russian special services and law enforcement agencies”, military unit 29155 functioned as a GRU training center back in the 60s.

A publicly well known unit, which for more than 50 years acted as a small arms training center, is now 'destabilizing Europe' with operations that were, like the Skripal affair, obviously made up by 'western' spy services, or failed amateur coups attempts like in Montenegro. Its commander's personal data are available on the net. The NYT story itself confirms that there are even pictures from inside the training unit's premises:

Photographs of the unit’s dilapidated former headquarters, which has since been abandoned, show myriad gun racks with labels for an assortment of weapons, including Belgian FN-30 sniper rifles, German G3A3s, Austrian Steyr AUGs and American M16s. There was also a form outlining a training regimen, including exercises for hand-to-hand combat. The retired G.R.U. officer confirmed the authenticity of the photographs, which were published by a Russian blogger.

The headline "Russian spies learn to identify and use foreign small arms" was probably not sensational enough. The NYT thus presents some 'western' intelligence balderdash and fear mongering.

The 'so-called hybrid warfare', of which Russia is again accused is, like the regularly cited Gerasimov doctrine, the invention of a 'western' journalist who, like Michael Schwirtz, misreports on Russia:

[T]o my immense chagrin, I created this term, which has since acquired a destructive life of its own, lumbering clumsily into the world to spread fear and loathing in its wake. Back in February 2013, the Russian newspaper Military-Industrial Courier — as exciting and widely read as it sounds — reprinted a speech by Gen. Valery Gerasimov.
...
The problems with this formulation are numerous, though. Gerasimov was actually talking about how the Kremlin understands what happened in the “Arab Spring” uprisings, the “color revolutions” against pro-Moscow regimes in Russia’s neighborhood, and in due course Ukraine’s “Maidan” revolt.
...
What we call “hybrid war” in Russian thinking is actually two separate things. What Gerasimov was talking about was the use of subversion to prepare the battlefield before intervention, precisely the kind of operations used in Ukraine.

How the laughable Skripal story the MI6 spread or the unsuccessful attempts to kill some Bulgarian weapons dealer are supposed to "destabilize Europe" is hard to understand. How a training unit with a well known commander,  which existed for more than 50 years and has pictures of its premises publicized, can be "top secret" is a mystery. But what is understandable is that some author writes 2,000 words of such nonsense. It obviously pays well.

The USA had around 17 Intelligence Agencies when the original “high probability” of Russian involvement in the leaking of DNC materials Report was issued. Sounds like there’s a need for a few more.

The NYT story sounds live an Integrity Initiative anti Russia piece to me.

The Russians ate my homework.

Yes, sadly there will be many Americans & other armchair warriors believing this nonsense and tomorrow it will be quoted as evidence... Thank you for clarifying the lies. GMJ

This just in,
U.S. military high command just commissioned a top secret elite training facility just south of area 51 in the Nevada desert. It is rumored that the purpose of this project is to train all U.S. military forces how to stop shooting people in their own countries and stealing all of their shit.

And in other news, U.S. Intelligence agencies feed the NYT a fake story that they dutifully repeat like a trained seal begging for their next fish. These guys have no self-respect.

Is our MSM lazy, stupid or evil, is there a meaningful difference between being evil and being lazy?

There is indeed a subversive unit operational in my country. It is the unit sitting in power, squandering assets to the empire of which it is a vassal, and curtailing the rights of it citizens further and further, including human rights.
I for one welcome the Russian unit, and will have coffee and cake ready.

Thank you Moon of Alabama for you invaluable daily work!
It is nearly as funny as it is sad having, once again, to note how these NATO clowns (whose level of incompetence is about that of their "experts" Luke Harding or Eliot Higgins) deserve to disappear in the dustbins of history. Incredibly shameful! And these are "the strategists" in whose hands the future of the American and western citizens lies!! Alarming!! It is high time to blow the whisle within NATO. I learned that thousands of whistle blowers were stifled in the Pentagon these few recent years only though.

About the author(s)
"b" is Moon of Alabama's founding editor's nom de guerre.

Sure Trump is ‘Betraying the Kurds!’ But What’s New about That?