Washington abandons its Kurdish proxies as Ankara and Damascus step in

October 15, 2019
Please make sure these dispatches reach as many readers as possible. Share with kin, friends and workmates and ask them to do likewise. 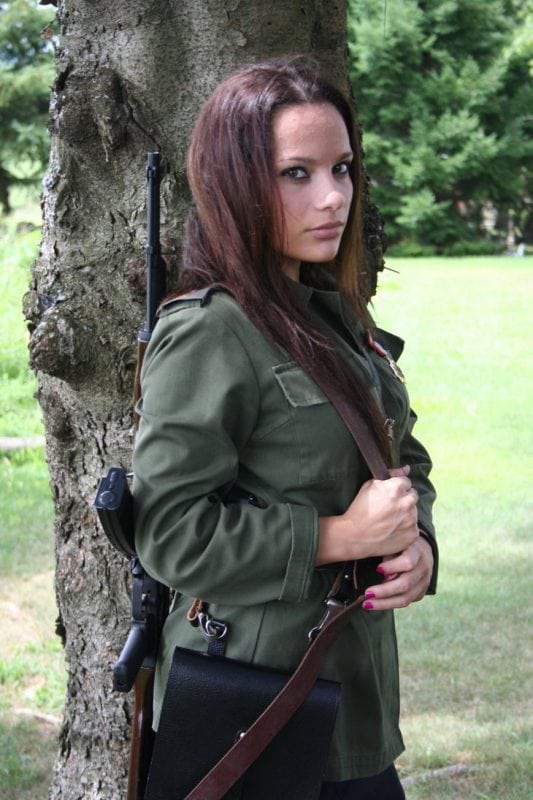 A “Rojava” (Kurdish) fighter. The Kurds have been very smart in disseminating many pictures of their attractive women fighters.

Even though I have my doubts over whether Washington will actually withdraw from Syria fully, it seems as if their Kurdish proxies in northern Syria have been left to defend for themselves against the ongoing Turkish offensive. I can’t say I’m surprised since Washington has done this to their Kurdish “partners” many times before, yet the Kurdish leadership across Iraq and Syria have failed to learn from history yet again.

Once more, the Kurdish leadership have been proven to have put their faith in the wrong allies. When Moscow stepped into the Syrian war four years ago, Moscow gave the YPG the same offer that Assad had given before: reconcile with Damascus and join forces against terrorism. They refused. Moscow tried again by offering them to set up a consulate in Moscow, inviting them to peace talks in Astana and offering them safety from Turkish attacks, if they agreed to a deal with Damascus, one that respects Syria’s territorial integrity. Moscow even offered talks on a guarantee for future Kurdish participation in Syrian politics. They refused once again, with a spokesperson for the YPG explaining that Washington does not allow them to talk to Moscow. Such was the nature of the US-Kurdish “alliance”.

When the so called “Islamic State” terrorist group was about to collapse in 2017, the US backed “Syrian Democratic Forces”, of which YPG is part of, was quick to grab as much land as possible. Then came the threats against Damascus and the Syrian Army, to back off from entering the eastern shores of the Euphrates. Fortunately, Moscow, Tehran and Damascus saw Washington’s moves early on as they managed to capture the imperative city of Albukamal, located exactly at the Syrian-Iraqi border, before Washington could. In capturing this city, Damascus and Baghdad have been able to re-open the Tehran-Damascus highway stretching from Iran, through Iraq and into Syria, connecting the three countries and enabling the transportation of supplies from Iran to Syria. 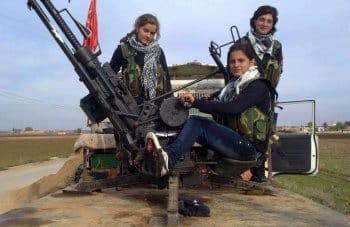 The Kurds in Northern Syria are facing tough choices, but the road least fraught with dangers is ultimately integration with the rest of Syria.

The SDF managed to secure many of Syria’s oil fields in their push to capture the eastern parts of the Deir Ezzor province. Having grabbed such a large part of Syria, the Kurdish leadership felt safe with US forces backing them against Damascus.

This stance didn’t seem to change when Turkish forces together with their proxy jihadists launched the Afrin offensive. US forces did nothing to protect their Kurdish vassals from harm as Turkish forces easily captured the entire Afrin Canton within weeks. The Kurdish leadership was offered a deal with Damascus in which control over the Afrin area would be handed over to the Syrian Army before Turkish forces could capture it. Alas this suggestion was refused by the stubborn Kurdish leadership who would rather let Ankara and the Jihadists capture that area.

So 18 months later, the US has seemingly withdrawn and abandoned the Kurdish-led militias to fend for themselves against Ankara and a hostile Damascus. Not so surprising considering Washington’s track record. The Turkish Army and its proxies launched their offensive on Wednesday and quickly announced gains that same day. Since then, several towns along with the border city of Tal Abyad have fallen into Turkish hands as reports have emerged that imprisoned ISIS militants have escaped from their prisons as a result of Turkish bombardments of several prisons in the Hasakah province.

The offensive has caught an enormous amount of media attention, as the Kurds have for long been the Western Media darlings, capturing many people’s hearts with footage of young armed women battling the perverted terrorist forces of the “Islamic State”. 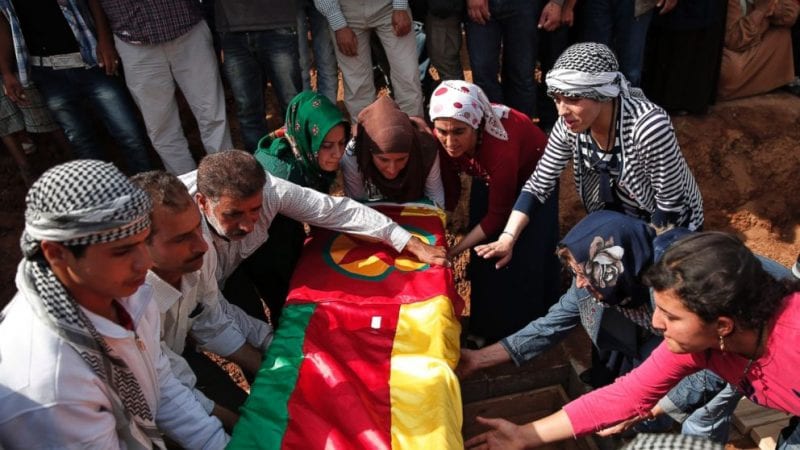 Mourners lower the coffin of a female Kurdish fighter killed in clashes with ISIS on the Turkey-Syria border, Oct. 14, 2014. The Kurds’ fight to remain independent, and overcome ISIS fanatics, a monster ironically created and unleashed by their own regional ally, the US, is now approaching a calamitous end.

Washington and the European vassals have all howled and voiced their “concerns” over Turkey’s offensive. Some have called for resolutions and embargoes on Turkey for “violating international law” and “endangering the region”. What a joke! Look at the people expressing their “concern”: Hillary Clinton, Lindsey Graham and Nikki Haley. These are some of the people that are concerned that Turkey is “endangering the region”.

Now when Twitter is being filled with videos of executed Kurdish fighters, these people recognize the same “FSA” militants that they used to cheer for to execute Syrian soldiers, for what they are, barbarian scum.

Just a few days after the commencement of the offensive, Kurdish officials began contemplating the idea of turning to Moscow and Damascus for help, but not before asking Washington one last time to confirm their betrayal. SDF General Mazloum Kobani openly indicated in an interview with CNN that dealing with Moscow and Damascus is an option if the US fails to protect the Kurds from Turkey. “I need to know if you are capable of protecting my people, of stopping these bombs falling on us or not. I need to know, because if you’re not, I need to make a deal with Russia and the regime now and invite their planes to protect this region”, Kobani said.

What a sad statement. He needs a receipt of Washington’s betrayal, as if it was a surprise when he and his colleagues have been warned for years about Washington’s treacherous nature. Reports have previously suggested the amassing of Syrian Army forces near Manbij in the Aleppo province, with the aim of entering and taking over the area. The same has been said about Hasakah and Qamishli in the northeastern parts of the country. If true, then this would create a situation similar to the one two years ago when the Islamic State was collapsing. As mentioned before, back in 2017, as the Islamic State was collapsing, the SAA and the US-backed SDF were racing to capture as much territory as possible. This resulted in the Euphrates turning into a demarcation line between SAA and SDF controlled territory, a line that has been in place since 2017. Now, it seems as if a new race is on, as the Syrian Army is racing against time, with the jihadists rapidly advancing and are inching closer to Raqqa city.

Will the Kurds choose poorly again?

About the author(s)
The author in his own words: “My name is Aram Mirzaei, I’m 30 years old and live somewhere in Europe. Originally, I hail from western Iran, a place that is deeply rooted in my heart. Ever since my teenage years, I’ve had a passion for history and politics, a trait I inherited from my mother who was an Iranian revolutionary. Naturally, this passion made me choose to study political science all the way up to my Master’s degree. Having supported my country against foreign threats my entire adult life, I became an activist for the Resistance Axis when the Syrian War broke out in 2011 and have combined my passion for writing and politics, to contribute to the propaganda fight that runs in parallel with the fighting on the ground.”