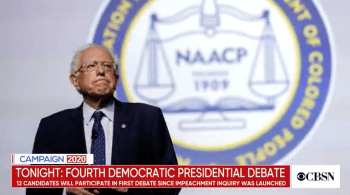 Jimmy Dore's has surely done his homework this time, and his conclusion is as clear as it is spot on.

The debate shows that the Democrats—including Bernie Sanders—are tied to a losing strategy, says Dore, and we agree. Bernie, for one, looks more and more like a wet noodle, at times a tedious demagog. His message resonates with a public long betrayed and neglected by the duopoly politicians, but, given ample opportunities to throw decisive knockout punches, he only blabs away, just jabbing jabbing and shadow boxing.  That's never worked to drop a guy to the canvas. Especially when we all know Biden has a glass jaw, as Dore is quick to point out. The inevitable conclusion is that the man is either an idiot or a fraud, intentionally sabotaging his own chance at the prize. Is he doing his sheepdog act again? His candidacy is wounded.

But regardless of the answer, if the corrupt Democrats can't  field a candidate that looks better than a mediocre, boring centrist in the pocket of big corporate interests, then 2020 belongs to Trump, and this time it won't be a surprise.

Watch this video, and enjoy the cathartic power of sharing Jimmy's anger and volcanic frustration. In that he surely interpreted my feelings, along with the feelings of tens of millions of Americans who see the situation exactly the same.  No wonder the ruling class is worried. Yet they can't implement ANY of the easy and effective cures for this problem, because all of these numerous ailments stem directly from the immutable nature of their beloved system, mendacious predatory capitalism.  Hence the only options are elaborate lies, distraction and repression.  Until the system collapses from the weight of its own proliferating contradictions of the people reach the limit of their endurance, which could happen a lot sooner than many imagine.—PG

Pelosi Is No Hero/Red Flag Watch