Home ABOMINATIONS Class Struggle in Chile: President Piñera At War With His Own People

Class Struggle in Chile: President Piñera At War With His Own People

October 25, 2019
Please make sure these dispatches reach as many readers as possible. Share with kin, friends and workmates and ask them to do likewise.

Chile has been held up for decades as South America’s clearest example of the stability possible when neoliberal policies are adopted and implemented as if they were religious tenets. The country is now in a situation of open rebellion. This revolt has exploded in Chile exactly as a result of the consequences of those same policies. 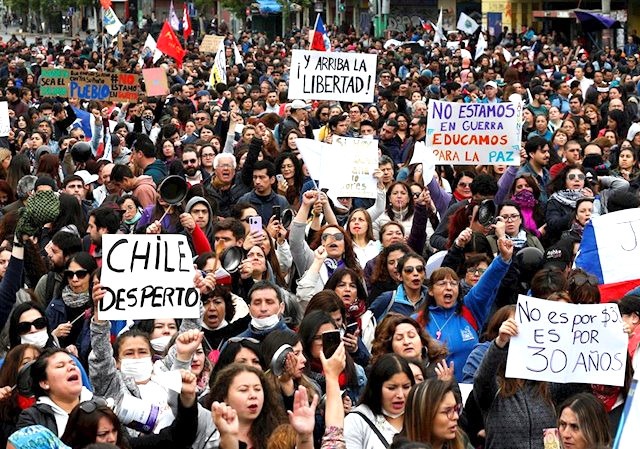 President Sebastián Piñera and the Chilean government’s brutally violent repression has led to at least 18 deaths. More than 5000 people have been detained or arrested. There are literally hundreds of videos of frighteningly vicious military and police actions against the Chilean population circulating on social media. The increasingly desperate tactics of curfews, a state of emergency, repression, public denigration of demonstrators as criminals and unashamed violence are bringing more people into the streets every day. Each intensification of repression causes the streets to fill with even more energy the next day. And that energy is already incredible.

Yesterday, more than 20 ports were shut down by dock workers. Today and tomorrow trade unions across the country have called for and are actively organizing a general strike.

How could all of this possibly be a response to a 30 peso (about 4 cents USD) public transport fare hike? Of course it is not. But transport is expensive. A minimum wage worker in Santiago pays as much as 15 per cent of their wage on public transportation if they take a bus or metro twice a day. In a country where more than half the population earns less than the official minimum wage. But of course, any rebellion of this depth and scale requires much more fuel.

Class War from Above 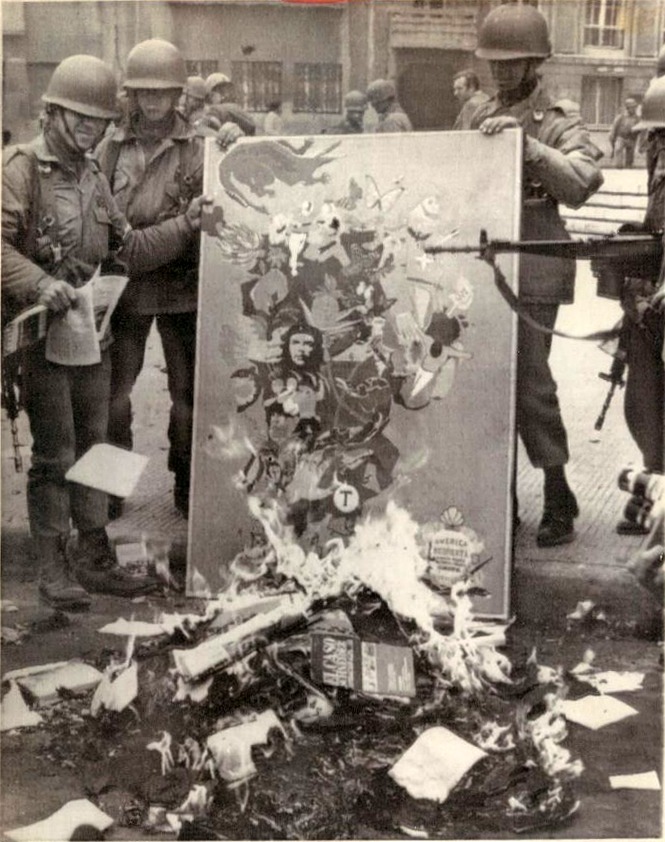 Left: The prolog to today’s struggles, Pinochet imposes neoliberalism in 1973. Burning of radical books and icons.

Chile has been the most loyal adherent to the so called ‘class war from above’ neoliberal policies of the Chicago School since the military dictatorship of the 1970s. There are a variety of real and substantive legacies of this era that provide direct fuel to the current rebellion. Thatcher and Reagan’s ‘privatization miracles’ were modelled on the Chilean experiences that were initiated in the Pinochet era.

Almost everything that was public was privatized fully or partially. Similar to the US and many Latin American countries, an actively undermined, weak and fragmented public health system exists in Chile. But those that can afford it pay a significant proportion of their incomes for private health plans in order not be one of the thousands of Chileans that die every year waiting for medical treatment. Similar to Canada, students have to pay high tuition fees to study at universities and they graduate with debt that regularly takes more than a decade for graduates and their families to pay back.

The pension system is completely privatized. In poorly concealed political efforts to replicate the model, economists present Chile’s individually capitalized model of ‘Pension Fund Administrators’ (AFP) as a great success across the region. This system was implemented during the dictatorship. It is managed by private companies that ‘lend’ workers’ pension fund money to themselves! These companies can capture any gains for themselves and pass losses on to workers. The system leaves retired workers in misery. Trade unions and other groups have been running campaigns to change this system for years now. Piñera has proposals currently moving through the senate the give even more resources to these companies. 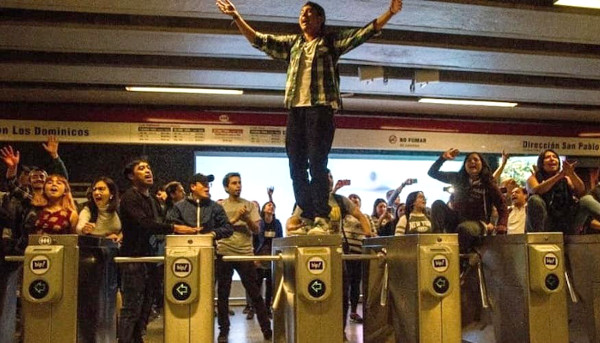 ABOVE: Demo in Santiago’s metro.

Residents of Santiago pay some of the highest water bills on the continent and face chronic shortages. The water system was completely privatized under Pinochet. Exactly the model consistently promoted by the World Bank and International Monetary Fund. Today three quarters of Chileans support the return of the public ownership of water.

The national constitution and labour rights regime in Chile were also created during the military dictatorship. Many unions are weak and fragmented by law. With low levels of negotiating power, hours of work are long, holidays are few and exploitation is intense. The only country with higher levels of inequality in the region is Brazil (Chile competes with Colombia for the title of second place). Exactly the country where the current president is trying to replicate Chilean policies.

Even though the Mapuche (the main group of indigenous peoples in Chile) have never formally ceded to the colonial settler state, the systematic violence directed at these peoples has been unrelenting for centuries and its effects have been exactly those planned. State and private violence against indigenous peoples continues today in a context similar to that of Canada where many indigenous peoples are understood to be inconvenient impediments to very rich ‘natural resources’.

Class War from Below

So the immediate responses of some smart, young and strategic organizers to the public transit fare hike was to organize a ‘jump the turnstiles’ campaign. The campaign took off immediately. The government reaction was to militarize the metro stations and violently repress the movement. When this didn’t work, the police shut down the stations during peak hours. Workers that were returning home, and were barred from the stations, joined the growing demonstrations.

Piñera refuses to recognise legitimate causes of upheavals.
“We’re at war with a powerful enemy..that does not respect anything or anybody.”

The Santiago police completely lost control at the end of last week when 16 subway stations and the Italian energy multinational Enel’s headquarters were set on fire. Several other public and private buildings and many vehicles have been set on fire including Walmart. The army was mobilized, and a state of emergency declared. A curfew was called. This was understood as particularly outrageous because the legacy of the military dictatorship has never been seriously dealt with in Chile.

While Piñera was giving the orders to intensify repression in the streets, Chile’s National Institute of Human Rights reported a series of abuses and serious violations by the security forces throughout the country. “There are reports of excessive use of force at the time of detention, unfair harassment of children, mistreatment, blows to the face and legs, torture, stripping of women and men, sexual violations, among other violations.” The president’s response was to openly declare that Chile “is at war,” once again inflaming the population. Almost immediately, a top general stated publicly that he was not at war with anyone.

The curfews have been openly defied as thousands of decentralized ‘pot-banging’ demonstrations were happening in working and middle-class neighbourhoods in all of the larger cities of the country. Manifestations of this anger are now being expressed in every region of the country, in both urban capitals and rural areas. Traditional political parties and the old socialist left in Chile have been completely unable to give direction to or provide any kind of leadership to the movements.

Piñera has made a series of increasing concessionary offers since Monday. First announcing the revocation of the fare increase, then, after finally accepting that this was not about transit fares, he has moved quickly to offer a 20 per cent increase to pensions and to include some expensive medical treatments in the public system. All to absolutely no effect. The demonstrations and now general strikes continue to grow in force.

The only response of the state has been repression with almost 10,000 troops now in the streets of cities from the north to the south of the country. The National Institute of Human Rights is now investigating a temporary torture center that the military built in a closed metro station. It seems as if the dictatorship in Chile never really went away. But it is also true that the resistance never disappeared either. The popular rage is consolidating into that courage and confidence that leads to the affirmation that collective action works, even in the most repressive of political moments. The myth that well-implemented neoliberal policies will deliver stability and economic growth is dead. ¡Adelante! • 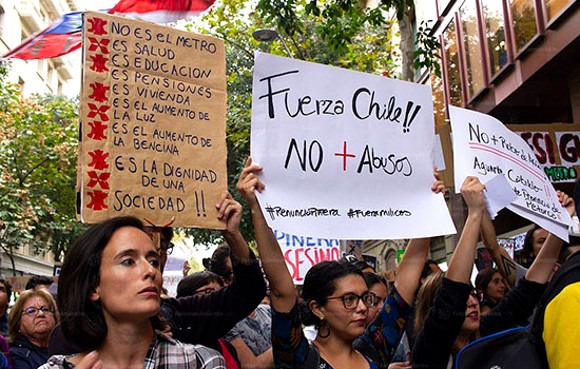 ABOUT THE AUTHOR
Euan Gibb is based in São Paulo, Brazil. He works with the global union Public Services International (PSI).

Banditry in the open: “We Want To Keep The Oil”

Feudal Japan Edo and the US Empire