Home CAPITALIST SICKNESS You’ve heard about the violence in Chile. You probably haven’t about their relationship with Israel’s army

You’ve heard about the violence in Chile. You probably haven’t about their relationship with Israel’s army

November 1, 2019 6 minutes read
Please make sure these dispatches reach as many readers as possible. Share with kin, friends and workmates and ask them to do likewise.

In recent years, the IDF has seemingly used a tactic of maiming Palestinian protesters rather than shooting to kill — and it's something we've seen reflected in Chile this week 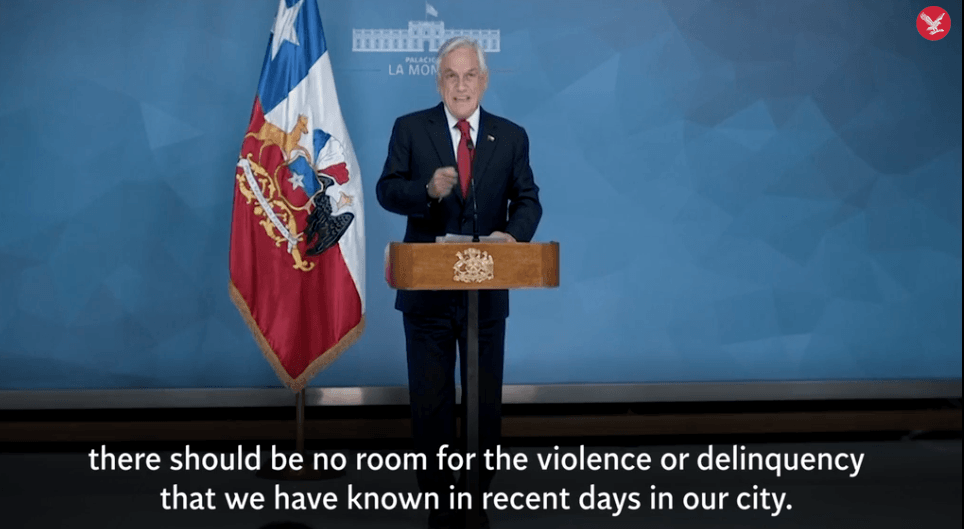 ABOVE: Piñera declaring the protesters to be a "danger to society" (sic), and common criminals." In the next few days he would have to eat those words.  Hypocritically, of course.

[dropcap]W[/dropcap]hat started as a student act of civil disobedience against Santiago’s rising metro fares has now expanded outside the Chilean capital. In a sudden uprising against austerity and persistent economic inequality, a proposed fare increase (the equivalent of €0.02) was simply salt on an open wound for the poor and working-class citizens of Chile. Peaceful protests, when forcibly dispersed by the national police, have turned violent. The government, led by conservative billionaire President Sebastián Piñera, responded by declaring a state of emergency and calling in the military to quell protests, declaring that the state was “at war”.

The dark era of Pinochet’s rule has some notable connections to the present. President Piñera, having appointed individuals to his cabinet who made comments defending Pinochet, has also worked to refine so-called “anti-terror” laws from the junta era. These laws have in turn increased surveillance and oppression of Mapuche and left-wing groups.

Today, the armed forces of both Chile and Israel make no attempts to hide their alliances, citing on the Chilean Embassy to Israel’s website the aims of “increasing the bonds with...Israel, in order to make knowledge, training and experiences exchange possible.” Chile and Israel signed an agreement in 2018 which spoke of encouraging further "cooperation in military education, training and doctrine" during Israeli General Yaacov Barak’s visit to Chile that year.

While this alliance is known to benefit the military power of both countries, those who may be affectedthe most negatively are the working class and Indigenous people of both regions. In Israel, Palestinians suffer under a system of occupation and apartheid, and in Chile, the working class and Indigenous groups, such as the Mapuche, have experiences centuries of colonial-based oppression.

In recent years, it has been widely reported that the Israeli Defence Force (IDF) has seemingly used a tactic of maiming Palestinian protesters rather than lethally shooting them. For more than a year now, Palestinian civilians have marched towards the Gaza wall in protest of Israeli occupation, and theIDF has shot nearly 60 per cent of these 10,511 civilians in the lower limbs, with more than 90 per cent of casualties coming from live ammunition.

During the past week, it's notable that similar tactics have been used on Chilean civilians on multiple reported occasions. One woman has beenshot in the thigh and was reported in critical condition due to excessive bleeding. In another, a 23-year-old manwas shot in the leg . Another, was crushed to death by a military vehicle. 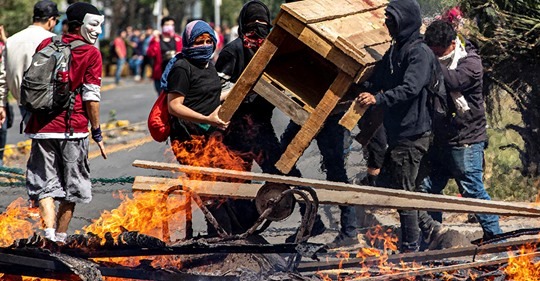 To my mind, and given the relationship between these two countries, such similarities in tactics are no coincidence.

Activist groups such as Jewish Voice for Peace have characterized the comparable relationship between the US and Israel as“the deadly exchange”. In the United States, municipal police, ICE agents, and other security agents routinely train alongside the IDF, sharing tactics and weaponry that have been condemned as damaging to both countries’ most marginalized groups.

Emilio Dabed, a Palestinian-Chilean lawyer, has laid out the connections before, writing: “In both cases, Palestinians and the Indigenous population in Chile live in a state of exception imposed on them by the colonizers, and under which the colonized people are [seen as] neither citizen-holders of rights nor political subjects but rather a threat — bodies [to be] ruled by violence that is normalized in law.”

The Israeli arms which forcibly kept Pinochet in power were used disproportionately on the Mapuche, who had supported left-wing efforts such as the election of socialist Salvador Allende in 1970. Today many Indigenous people are taking part in the demonstrations, and have become many of the casualties at the hands of the military.

Outside of Chile and Israel, it’s important that we call out military partnerships that perpetuate the oppression of marginalized indigenous people. Such ties between the IDF and other countries’ armed forces should be investigated and questioned. Further militarization of communities does not produce peace, but further brutality and injustice — and it’s time we talked about why we’re ignoring that fact.

About the author(s)
Accusing Zinevich of promoting violence and spreading hatred of Israel, The Canary Mission site (a Zionist tool that defines anyone or anything opposing Israel's criminal mistreatment of Palestinians and promotion of endless war and chaos in the Middle East as an "anti-semite"), has the following inflammatory description of Benjamin Zinevich:

"Benjamin Zinevich [Benjamin Zinevich-Rodríguez] has promoted violence, spread hatred of Israel and promoted the Boycott, Divestment, Sanctions (BDS) movement.  Zinevich was an organizer of Students for Justice in Palestine (SJP) and Jewish Voice for Peace (JVP) at New York University (NYU), in 2018. Zinevich signed a petition condemning the Anti-Semitism Awareness Act (AAA) , a bipartisan bill drafted in response to growing anti-Semitism in the United States and passed unanimously by the United States Senate. Zinevich has promoted the #returnthebirthright initiative launched by JVP against the Birthright Jewish heritage tour (Birthright). As of February 2018, Zinevich’s LinkedIn page said he was a student of International Relations and Affairs at NYU, slated to graduate in 2019. As of February, 2018, Zinevich went by the alias “Benjamin ZR," on Facebook. His Facebook profile has since been deleted."

Adam Schiff is No Friend of Progressives