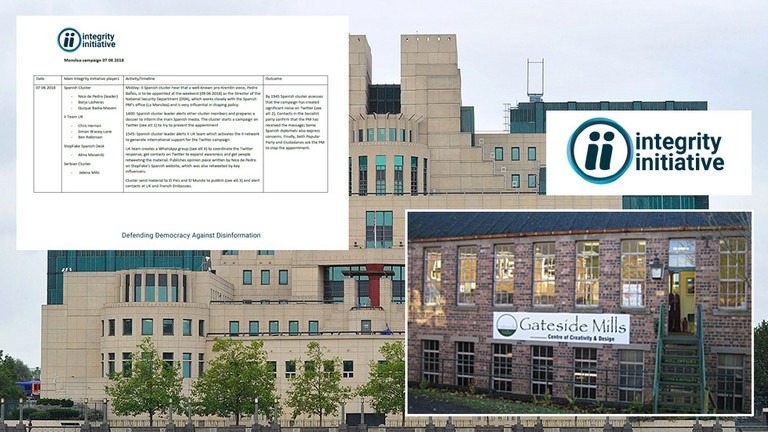 At the end of last year some enterprising ‘anonymous’ person released papers of the British Integrity Initiative. As we reported at that time:

The British government financed Integrity Initiative is tasked with spreading anti-Russian propaganda and thereby with influencing the public, military and governments of a number of countries. What follows is an contextual analysis of the third batch of the Initiative’s internal papers which were dumped by an anonymous yesterday.

Christopher Nigel Donnelly (CND) is the co-director of The Institute for Statecraft and founder of its offshoot Integrity Initiative. The Initiative claims to “Defend Democracy Against Disinformation”.

The Integrity Initiative does this by planting disinformation about alleged Russian influence through journalists ‘clusters’ throughout Europe and the United States.

Both, the Institute as well as the Initiative, claim to be independent Non-Government Organizations. Both are financed by the British government, NATO and other state donors.

There have been seven releases of Institute of Statecraft documents. They included proposals for large anti-Russian disinformation campaigns. The Institute of Statecraft suggested to impose anti-Russian sanctions as early as January 2015. Its head, the former NATO advisor and military spy Chris Donnelly, also proposed to synchronously expel a large number of Russian diplomats from western countries.

Below: The pathologically shameless aims of the British agents working hand in glove with Washington to wound Russia—a country they are technically still at peace with and that has done nothing to hurt the UK.  How do you treat a country like this? And why is this regarded as “legal”? 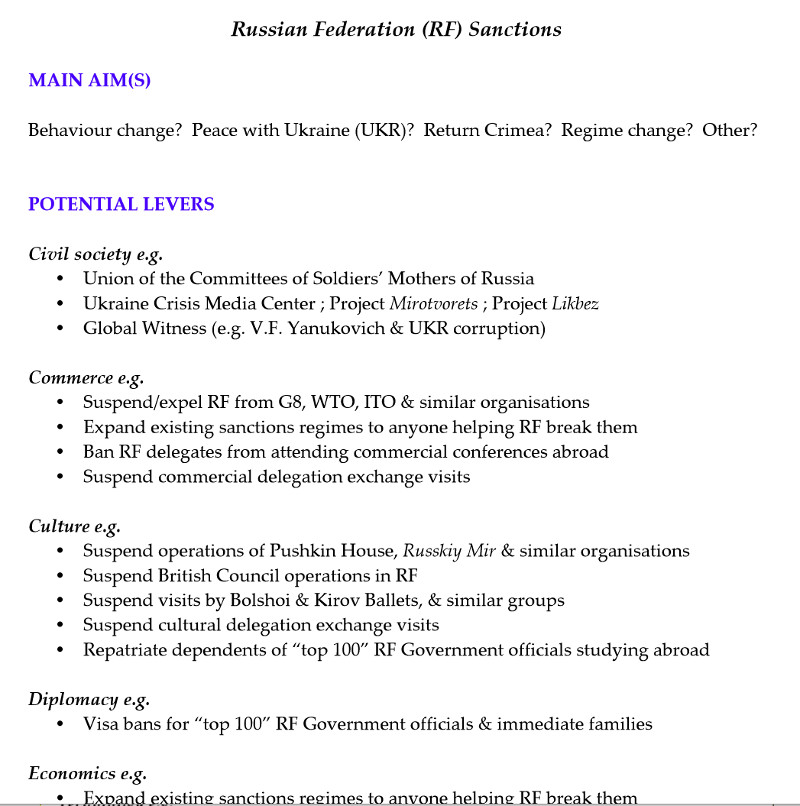 That plans seems to have been the blueprint for the March 2018 mass expulsion of Russian diplomats during the Skripal affair. Several of the other measures Donnelly and his ilk planned have since been implemented.

The Institute of Statecraft was registered as a charity under Scottish law. After the release of its papers the Scottish charity regulator OSCR investigated the status of the Institute. Unsurprisingly the OSCR found (pdf) that its shady behavior and its running of anti-Russian disinformation campaigns did not justify its status:

In the course of our inquiry we found that the charity was not meeting the charity test required for continuing registration as a charity in Scotland because:

The purpose of the charity was purportedly to educate the public. But the regulator found that the Integrity Initiative did not educate but only spread its own version of ‘reality’ i.e. disinformation. The charity lacked neutrality:

In addition, our Meeting the Charity Test guidance states that:

‘Where a charity is providing education in respect of a controversial issue it must do so in a way that allows the people being educated to make up their own minds.’

OSCR‘s view is that the Integrity Initiative expressed a particular perspective intended to persuade the public to a specific point of view and, given the nature of the subject matter, it was not sufficiently neutral to advance education.

The crocks who were running the charity were filling their own pockets with the public money the ‘charity’ received:

We were concerned at the level of private benefit that a number of the charity’s trustees were gaining from the exercise of its functions.

There was no clear explanation as to why the salaries being paid to charity trustees were considered reasonable and necessary, and we had concerns about the charity trustees’ decision-making process around these payments. We do not consider that this private benefit was incidental to the organisation’s activities that advanced its purposes.

The regulator also noted a lack of record keeping and a lack of documentation of decision making by the Institute’s trustees.

Unfortunately the charity regulator will not close down the Institute of Statecraft. It accepted that it rectified its behavior by taking a number of measures:

The Integrity Initiative, as paid for by the British Foreign Office, Ministry of Defense, NATO and other such entities, will live on as a non-charitable entity with even less transparency. Its website, as well as that of Institute of Statecraft, is down. That it will now have to live in total secrecy will make it more difficult for it to recruit foreign journalist to spread its propaganda.

Since the Integrity Initiative was exposed the British government opened and financed a new secretive shop that will continue to spread anti-Russian disinformation:

The announcement, buried in a response to a written parliamentary question, was supremely light on detail – Duncan merely said the effort would “respond to manipulated information in the news, social media and across the public space”. Official fanfare was also unforthcoming – there was no accompanying press release, briefing document, or even mention of the launch by any government minister or department via social media channels.

—
Previous Moon of Alabama reports on the issue:

Tim Hayward provides a list (scroll down) of a large number of articles written here and elsewhere about the Integrity Initiative.

“b” is Moon of Alabama’s founding (and chief) editor.  This site’s purpose is to discuss politics, economics, philosophy and blogger Billmon’s Whiskey Bar writings. Some time ago, the commenting at Billmon’s Whiskey Bar became a bit excessive. Billmon therefore closed the comments at his place on June 29, 2004. The community of commentators was left behind to search for a new place. Moon Of Alabama was opened as an independent, open forum for members of the Whiskey Bar community.  Bernhard started and still runs the site. Once a while you will also find posts and art from regular commentators. The name of the original Whiskey Bar was taken from Bertolt Brecht’s Alabama Song where the first line goes: “Show me the way to the next whiskey bar”. The name Moon of Alabama was taken from the first line of the chorus of that song: “Oh, moon of Alabama …”. You can reach the current administrator of this site by emailing Bernhard at MoonofA@aol.com.

CIA, FBI Fight for Their Lives as RussiaHoax Implodes

Why is Soviet architecture so often referred to as “soulless”?