December 2, 2019 4 minutes read
Please make sure these dispatches reach as many readers as possible. Share with kin, friends and workmates and ask them to do likewise.

[dropcap]A [/dropcap]historic general strike took place in Colombia on Nov. 21, paralyzing the entire country. Half of Colombia’s population of over 50 million people is estimated to have participated, with millions staying home from work and hundreds of thousands demonstrating in the streets. At least 500 separate actions took place, from the capital, Bogotá, to remote rural areas. 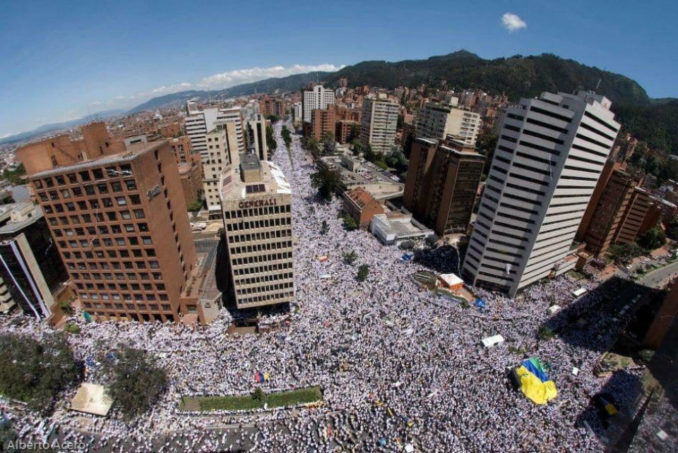 Few nations on this planet have suffered as long and as brutal a repression as the people of Colombia, long supported by Washington, and utilized as a major base to project military power in the region. The murderous Colombian ruling class has been asking for this for decades, and now, as one nation after another revolts against neoliberalism, Colombia, too, is rising in righteous anger. A view of the General strike Nov. 21, Bogotá.

Strikers blocked major streets, ports and airport entrances. The Central Union of Workers (CUT) accused the government of “brutal repression” in Bogotá, where police fired tear gas on peaceful protesters. Fights with police broke out in other parts of the country. The mayor of Cali declared a 7 p.m. curfew.

The CUT called the strike to protest the U.S.-backed right-wing government’s plans to impose labor and pension “reform” —  reducing retiree pensions and lowering the minimum wage. While President Iván Duque Márquez denies any intention to cut pensions or wages, the leader of his party, former President Álvaro Uribe Vélez, has advocated exactly that.

The message and scope of the strike became much larger as Indigenous, Afrodescendant, student and peasant organizations joined forces with striking workers. The government has committed numerous massacres against Indigenous and Afro-Colombian communities, including the killing of five Indigenous activists on Oct. 29.

There is also widespread anger with President Duque for his failure to implement the terms of the 2016 peace agreement negotiated between the  Revolutionary Armed Forces of Colombia (FARC) and the government. A section of the FARC made the difficult decision to resume the armed struggle earlier this year. The National Liberation Army (ELN) is also engaged in armed guerrilla warfare against the brutal government. 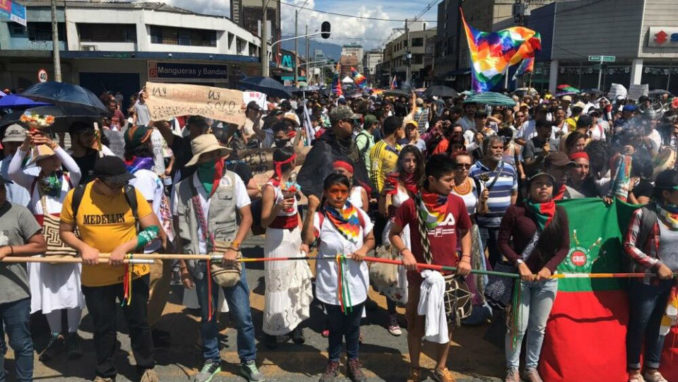 Strike part of a continental uprising

This unprecedented outpouring of the masses broadens the upsurge engulfing Latin America. Other countries’ influence could be seen. The flag of Andean Indigenous peoples, frequently held in Bolivian marches opposing the recent U.S.-orchestrated coup there, was carried boldly during the strike. A theme of the mass protests in Chile — that the oppressors have taken everything from the people, including their fear — was expressed all over Colombia on Nov. 21.

The courage of the masses has emerged in a country deemed the most dangerous in the world for union leaders — with an assassination rate the highest anywhere. Community and human rights activists are also frequent targets of right-wing paramilitary death squads with ties to the military and police. Since the signing of the 2016 peace accords, more than 777 activists, including 137 former FARC combatants, have reportedly been murdered in just the past year. (teleSUR, Nov. 22)

Strike Solidarity demonstrations took place in a number of cities worldwide, including London. The AFL-CIO issued a statement backing the national strike.

“Colombia won on this historic day of citizen mobilization,” reads the Declaration of the National Strike Committee issued Nov. 21. Signed by over 40 unions and other organizations, the declaration says the strike “has been the expression of a new Colombia, of another possible Colombia.” (cut.org.co)

Now be sure to share this article with friends, kin and workmates! Fighting the empire starts when you neutralise its shameless lies.
[/su_box]
Up to You.