“Things are seldom what they seem, skim milk masquerades as cream,” goes the old Gilbert and Sullivan song. 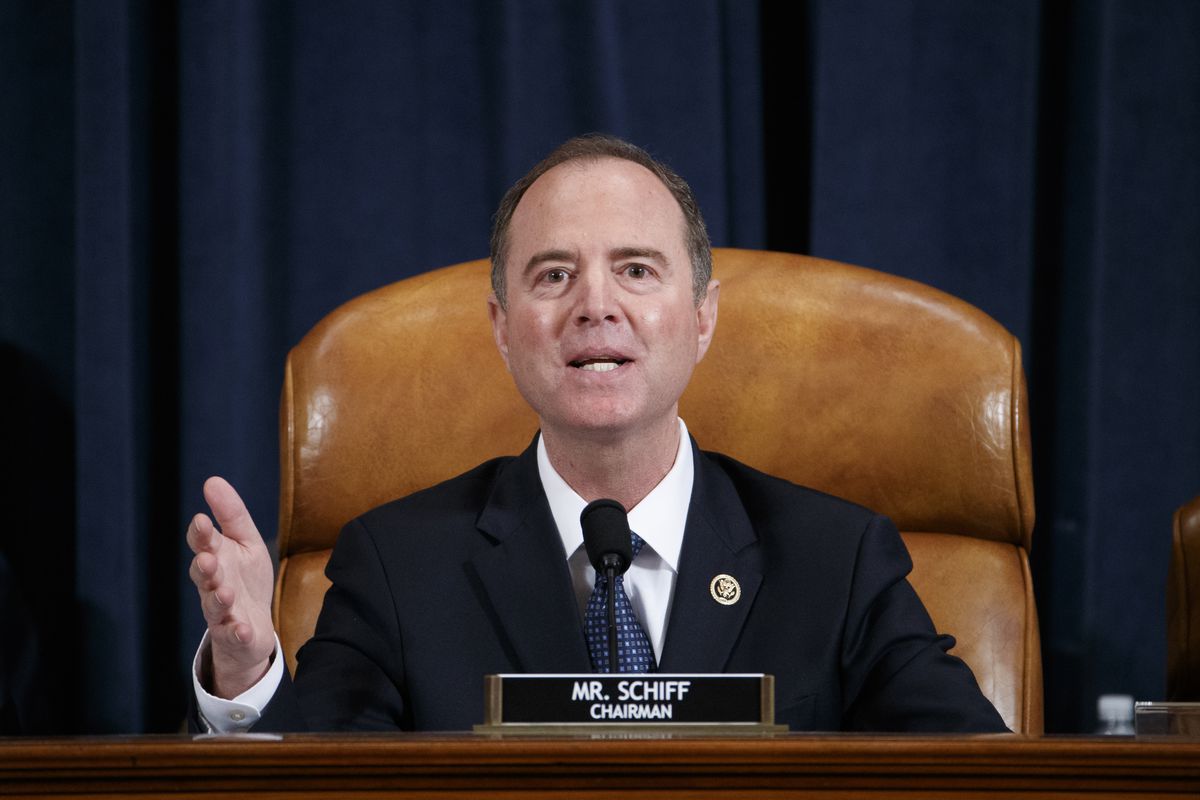 The repulsively hypocritical Democrat Adam Schiff, one of the ringleaders of this circus.

[dropcap]T[/dropcap]he current impeachment hearings conducted by Congress may seem like an effort to get rid of Trump and his reactionary policies. In fact, they have no progressive content and conceal more than they reveal.

Yes, Trump is a crook — and not a very artful one. He clumsily tried to get the Ukrainian government to investigate the son of his political rival, Joe Biden, and threatened to withhold military funding for “security” if they didn’t.

That has given his political opponents in both capitalist parties a lot of ammunition against him. But this does nothing to combat all the horrible things Trump has done in his domestic policy — his deadly attacks on immigrants, especially from Latin America, the Middle East and Africa; his instigation and promotion of racism and patriarchal bigotry; his absurd denial of the climate crisis in order to curry favor with energy corporations; his right-wing and anti-worker cabinet appointments, etc.

And a closer look at those in the state apparatus moving against him reveals a rogues’ gallery of war hawks.

Fiona Hill, the former National Security Council senior director for Europe and Russia, was an effective witness against Trump in the hearings. Hill has been a deputy to John Bolton and was assigned to Ukraine. Until he resigned in September, Bolton was Trump’s National Security Adviser.

Bolton is a notorious foreign policy hawk. Prior to his resignation, Bolton was calling for a “tougher line” against Iran, Venezuela and the Democratic People’s Republic of Korea (north Korea). He is credited with having torpedoed the talks between Trump and DPRK leader Kim Jong Un held in Vietnam last February.

SIDEBAR
Watch Jimmy Dore remind us what the corrupt Wall Street/CIA Dems are hiding, while they try to whip the country into a frenzy about Trump's clumsy peccadilloes.

In fact, it hasn’t worked. Venezuela and Cuba have more than survived and won’t bow down to Washington’s dictates.

What the impeachment hearings are concealing is an effort — by the military, the “intelligence community” and the imperialist ruling class they serve — to push for an even more aggressive foreign policy — with or without Trump.

These forces didn’t like the fact that Trump wouldn’t OK an all-out attack on Syria and eventually pulled out U.S. troops. That he held back from waging war against Iran. That he wants to be seen as a peacemaker.

That is not to say that Trump is some kind of pacifist. He has overseen enormous increases in the Pentagon budget. But his “America first,” flag-waving pseudo-protectionism has not given the war hawks the go-ahead they want.

Ukraine and the real crimes

Ukraine used to be part of the Soviet Union. It became an “independent” country within the U.S. orbit with the downfall of the USSR. For years, Washington has given military aid to Ukraine, and not just to integrate it into an alliance against Russia.

U.S. military aid has provided arms for Ukraine’s war against the people in eastern Ukraine who have been fighting to set up the People’s Republics of Donetsk and Lugansk. They speak Russian and were historically part of Russian territory. The U.S. government calls this struggle “Russian aggression.”

And U.S. aid is also used to prosecute a war against progressive elements inside Ukraine who have stood up to actual fascists in the government. On May 2, 2014, fascist gangs in Ukraine killed 48 people when they burned down the House of Trade Unions in Odessa. (For more on this, seeworkers.org.)

The U.S. government had no problem with this massacre of workers and kept the weapons coming. The hearings against Trump are glorifying the war criminals like Bolton who are behind these policies.

The impeachment hearings are concealing the real crime: that both the Democratic and Republican parties serve the interests of the super-rich and have extracted trillions of dollars from the workers in the U.S. to pay for a war machine designed to safeguard corporate interests above all else.

One may loathe Trump, but the impeachment hearings have become like the People’s courts in National Socialist Germany, one is guilty till proven guilty. The sheer hatred is quite pathological as shown by the female legal professor consulted for the last one of these hearings, who crosses the sidewalk if she has to pass a Trump building and spits out her dislike of him as if she is judging Satan. One would expect a law professor to have more impartiality, but no, the #me-too movement has spread into brains and organs as if it is an infectious disease and Trump… Read more »