January 25, 2020
Please make sure these dispatches reach as many readers as possible. Share with kin, friends and workmates and ask them to do likewise.

At 10:01 UTC today the Associated Press tweeted that “hundreds” gather in central Baghdad to demand that American troops leave the country. 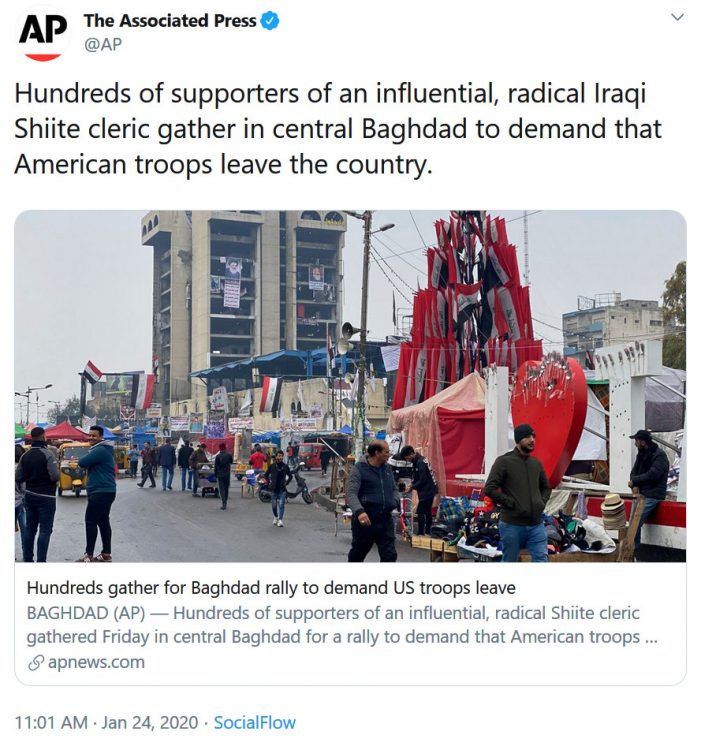 Thirty eight minutes earlier CNN had already reported that “hundreds of thousands” are protesting in Baghdad against the U.S. troop presence in Iraq. 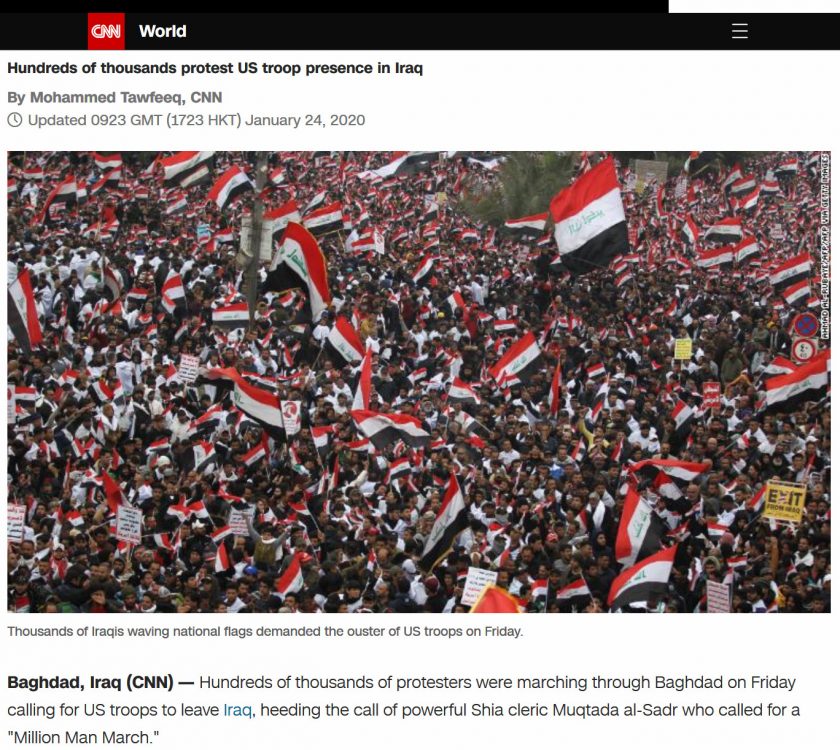 When AP sent the misleading tweet the commander of the Iraqi Federal Police Forces Jaffar al-Batat had already announced that the number of demonstrators exceeds one million.

That number may well be correct. Reports said that the column of protesters was already eight kilometers long even while many were still arriving. 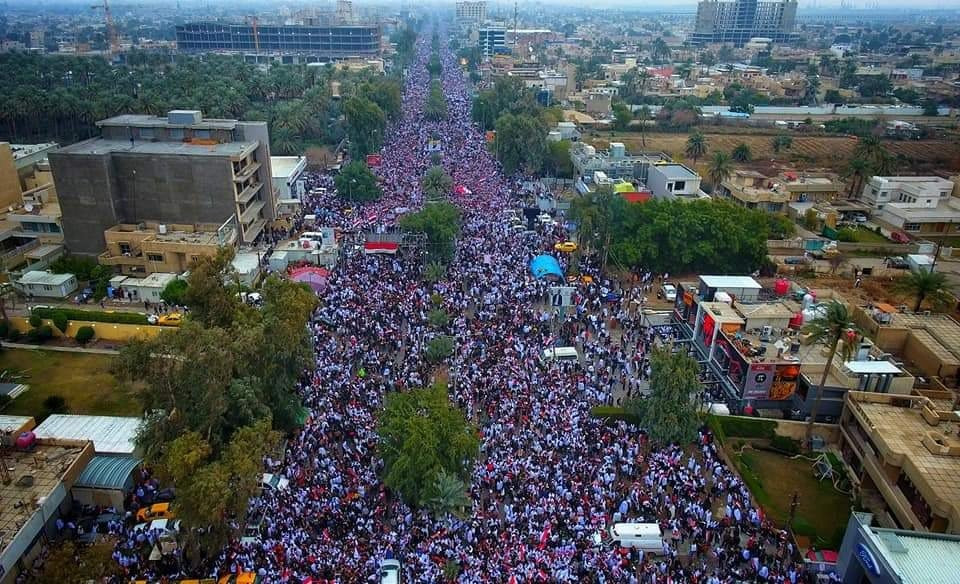 Muqtada al-Sadr, who had called for the protests but is hardly a ‘radical’, demanded that the U.S. follow the decision of the Iraqi parliament and end its occupation. All U.S. bases in Iraq must be closed, all security agreements with the U.S. and with U.S. security companies must be ended and a schedule for the exit of all U.S. forces must be announced.

Meanwhile the U.S. is pulling strings and tries to carve a new Sunni state out of western Iraq.

Al-Sadr promised to temporarily halt the resistance against the U.S. occupation if the U.S. commits to leaving orderly.

This seems more relevant here than on the open thread:

Apparently this is the new US policy in Iraq.

Incredible, isn’t it? A policy of parcellisation which has already failed twice, in Iraq and then again in Syria. And now Trump is going to do it again, according to reports which could well be right. They’re sufficiently stupid. They’re actually expecting the poor suffering Fallujans, who suffered through more than a month of being tortured by US troops, are going to stand up and fight for the US.

It’s a complete misappreciation of the situation, not unusual in the US. It is of course true that the Sunnis suffer from the unthinking policies of the Shi’a, and are treated like an occupied country. But that doesn’t mean that the Sunnis think they can stand up an independent state. They don’t, particularly if the US only stations a handful of troops there.

The US could of course militarily occupy the area, but that’s not Trump’s plan, as it would be too politically intrusive back home.

By the way I hear we’re about to receive Trump’s overall peace plan for the Middle East. Given that the first rollouts fell totally flat, I wouldn’t be too optimistic about its new reception in the Middle East.

– Muqtada Al Sadr is a iraqi nationalist. As soon as he has become the prime minister in Iraq he will boot the iranians out the door.

The Shi’a can certainly get their people out – which by the way is why they have such effective militias. The Sunnis don’t have similarly effective militias (though such would probably also be politically difficult).

The US certainly doesn’t have much idea how to tackle such a movement. The renewal of the plan for parcellisation just shows up the bankruptcy of US policy, nothing spoke to me so strongly of the failure of US thinking. For all the number of Washington think-tanks concentrating on the ME, they can’t come up with workable ideas.

Willy2 @3: no, he is not likely to do that considering Iran gave him safe have after the Americans turned on him when his harassment of them became unacceptable following the illegal invasion in 2003.

Al-Sadr is indeed an Iraqi nationalist, and not particularly pro-Iranian, others are more. He more profited from Iran’s safe haven, than became pro-Iranian.

On the other hand, he’s unlikely to become Prime Minister, as too extreme. The US, if it gets a say in the choice of the next PM, will veto. And he’s a sort who is in permanent opposition to everything, rather than in government, much like Corbyn in Britain.