February 13, 2020
Please make sure these dispatches reach as many readers as possible. Share with kin, friends and workmates and ask them to do likewise. 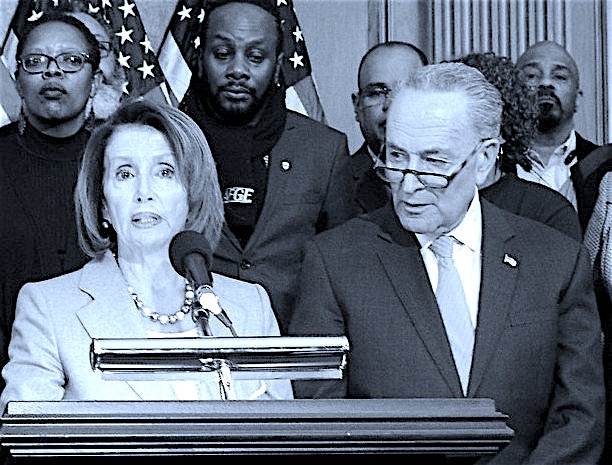 The Democrats are terrible at passing legislation that helps Black and poor people but fantastically talented at political theater.

“The difference is that Republicans don’t pretend to be anything but white supremacists.”

It is the time of the year in which the white-dominated, and historically white-biased, United States’ film industry doles out awards. The Democratic Party should win an Academy Award each year for the outstanding job they do in convincing Black voters that they care about their plight.

The Democratic establishment is riddled with fraudulent “snake-oil” politicians hellbent on extending their careers. It is a political party that unapologetically champions imperialist war after war. The Party is no more a peacemaker than their Republican Party counterparts.

The Democrats have never initiated or supported any kind of real plan to eliminate the vice grip of institutional racism and white supremacy. They are an organization that has never curtailed its support of the apartheid state of Isreal and that nation’s continued brutal oppression of Palestinians.  In essence, the Party is run like a Fortune 500 company. But, despite these facts, the Democratic Party has successfully branded itself as a champion of human rights and social justice, that cares about the structural plight of masses of people of color. Nothing could be further from the actual truth.

“It is a political party that unapologetically champions imperialist war after war.”

Unfortunately, the Democrats’ Black sales ploy has worked time and time, again. They are once again packaging Joe Biden as a friend of Black folk, hoping we will forget he was the architect of the 1994 “Crime Bill” that had a devastating impact on Black America. How could Biden be an ally of Blacks and also a friend to the late segregationist senator Strom Thurmond?  But Biden is not an anomaly in the Democratic Party, which is full of bigots, warmongers and champions of racist “tough on crime” policies.

Of course, the Republican Party is den of racism. The difference is that Republicans don’t pretend to be anything but white supremacists. They’re proud of it. It is logical that most Black people see the GOP as the enemy.

The Democrats, however, are treated as Hollywood super-heroes by the bulk of Black folks – many of whom think they own the Party, rather than the Party owning them.  Blacks have been politically domesticated into believing every story line mouthed by the Democratic thespians, who are terrible at passing legislation that helps Black and poor people but fantastically talented at political theater.

There are lots of Black actors in the Democratic caste of characters, all of them auditioning to prove how well they serve the rich white folks that control the Party.  Rather than applaud their fraudulent performances, we need to shut this too-long-playing show down, and get busy with the politics of liberation, social justice and peace.

COMMENTS?Please join the conversation on Black Agenda Report’s Facebook page at http://facebook.com/blackagendareportOr, you can comment by emailing us at comments@blackagendareport.com

ABOUT THE AUTHOR
Solomon Comissiong (www.solomoncomissiong.com) is an educator, community activist, author, and Founder of the Your World News Media Collective (www.yourworldnews.org). Solomon is the author of Unapologetically Outspoken: Hip Hop, Social Justice  & Liberation. Solomon is also the writer and producer of the documentary, Hip Hop, White Supremacy & Capitalism: Why Corporations Infiltrated RAP Music. He can be reached at: solo@yourworldnews.org

Chile Despertó! Chile Has Woken Up! The Rising Fight Against Neo-Liberalism in Chile