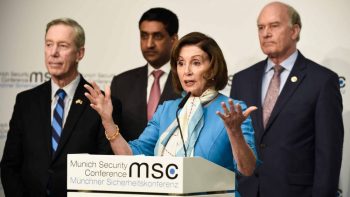 Pelosi with other flacks in the US delegation at Munich: aiming to muscle Europe into following Washington's diktats. The very incarnation of Democrat party hypocrisy, Nancy Pelosi admitted that her party's foreign policy was fully aligned with Trump's.

[dropcap]T[/dropcap]he 56th Munich Security Conference was dominated by a breakdown of the NATO alliance amid the resurgence of preparations for “great-power conflict” and a new scramble by the imperialist powers to recolonize the world.

In a blunt statement, the opening report to the congress made clear that “major interstate war is not necessarily a thing of the past.” Rather, “the return of more intense great-power competition may make war more likely again.”

Addressing the delegates, US Defense Secretary Mark Esper warned, “We are now in an era of Great Power Competition,” meaning that “we must move away from low intensity conflict and prepare once again for high-intensity warfare.”

While there was universal agreement among the imperialist powers on the need to prepare to fight wars, equally striking were the divisions over whom the targets should be.

In this supercharged atmosphere, long-simmering tensions and disputes between the United States and Europe erupted to the surface, revealing the widest divisions between Washington and its NATO allies in postwar history.

The immediate context of the conference was the decision by France, Germany, and most recently, Britain, to reject US demands to ban the Chinese telecommunications company Huawei from building cellular infrastructure in their countries.

In a series of speeches, US officials sought to bully and cajole their NATO allies into joining the United States’ anti-Chinese axis. The threats of Defense Secretary Esper were combined with the moralizing of House Speaker Nancy Pelosi and the empty triumphalism of Secretary of State Mike Pompeo, who declared, “the West is winning.”

BELOW : Watch Pelosi discharge one of her assigned duties: to convey the US empire's wish to have the EU join it in its criminal war against Russia and especially China. Warmongering and creating conflicts nonstop around the world is the full-time occupation of US policymakers, politicians, and media. 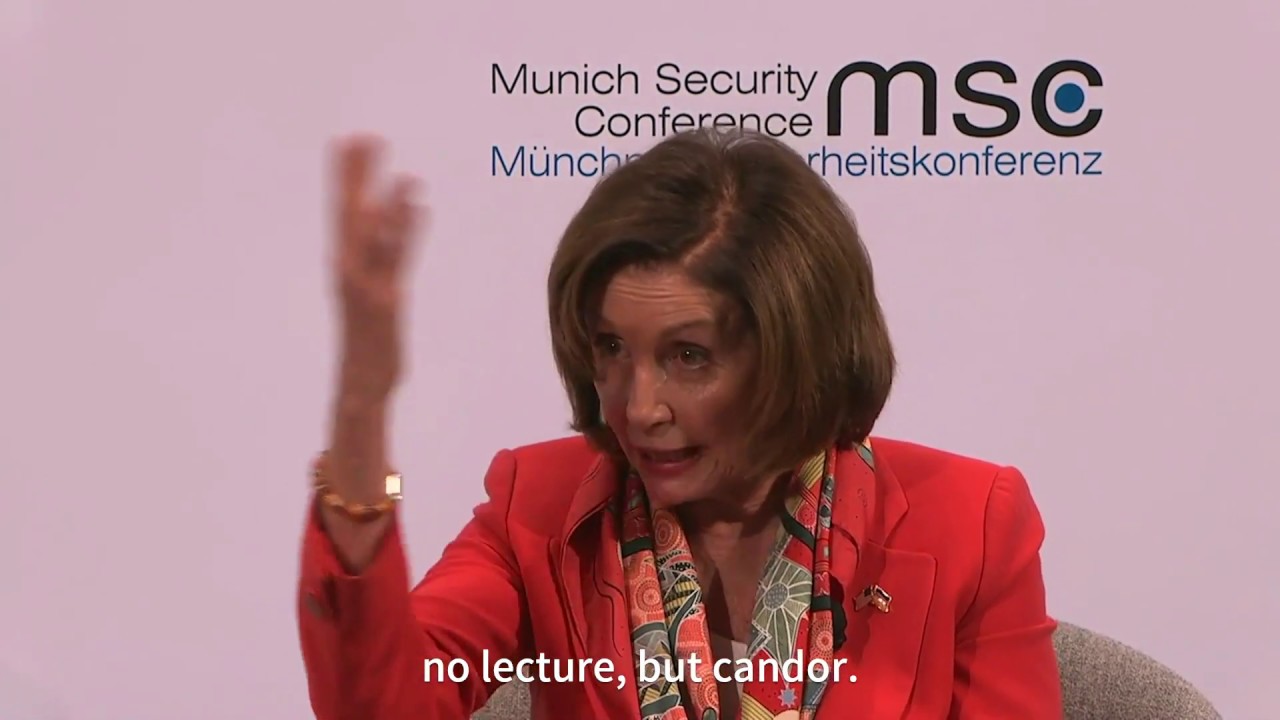 Pelosi trying to scare Europeans with the spurious notion of "cybersecurity": "China exports digital authoritarianism," claims the US politician, smugly forgetting the US is not a democracy but a cynical plutocracy.

So intense were the divisions between the US and its NATO allies that when a Chinese diplomat asked a question challenging US House Speaker Nancy Pelosi’s claim that Huawei was exporting digital “authoritarianism,” applause rang out throughout the room.

The presence of Pelosi and that of House Intelligence Committee Chairman Adam Schiff, who had just concluded a failed effort to remove Trump on the grounds that he was insufficiently aggressive against Russia, presented a united front over what Esper called “the Pentagon’s top concern: the People’s Republic of China.”

When asked whether she agrees “with the China policy of President Trump,” Pelosi answered that “we have agreement in that regard.”

Beyond the explosive divisions, the entire event was dominated by a profound unease and an atmosphere of crisis. The opening statement by Wolfgang Ischinger, the chairman of the conference, proclaimed that “the West is indeed in serious trouble.”

The theme of the conference was “Westlessness.” The opening report used the Spenglerian framing device of the “West” to encompass a whole range of crises: the decline of American hegemony, the growth of conflicts between the United States and Europe, the rise of the fascistic right and the breakdown of international norms.

The report spoke of “rifts” and “schisms within the West,” centering on a whole range of issues, “from the future of the Iran deal or the pipeline project Nord Stream 2 to NATO defense spending and transatlantic trade imbalances.”

Indeed, even as the event was ongoing, the United States announced new tariffs on European aircraft, while US Energy Secretary Dan Brouillette bragged about the success of US sanctions in forcing Germany to abandon its plans to construct a natural gas pipeline with Russia.

Important as it is in itself, the conflict over Huawei is in many ways a proxy for even more fundamental divisions. As in the period preceding the First World War, the major powers are scrambling for a redivision of the world, using the colonial language of “spheres of influence.”

As an article in Foreign Affairs recently pointed out, “Unipolarity is over, and with it the illusion that other nations would simply take their assigned place in a U.S.-led international order. For the United States, that will require accepting the reality that there are spheres of influence in the world today—and that not all of them are American spheres.”

In their contributions, each of the European leaders made clear their eagerness to obtain what Kaiser Wilhelm called a “place in the sun.”

“Europe will have to show its strength in the future,” said German Foreign Minister Heiko Maas. “Germany is ready to get more involved, including militarily,” he concluded, to resolve crises like “Iraq, Syria, Libya, Ukraine and the Sahel.”

Following the dissolution of the USSR in 1991, The United States set out to reorganize the world through naked military power, beginning with the first Gulf war. As the International Committee of the Fourth International wrote at the time, the Gulf War marked:

the beginning of a new imperialist redivision of the world. The end of the postwar era means the end of the postcolonial era. As it proclaims the “failure of socialism,” the imperialist bourgeoisie, in deeds if not yet in words, proclaims the failure of independence. The deepening crisis confronting all the major imperialist powers compels them to secure control over strategic resources and markets. Former colonies, which had achieved a degree of political independence, must be resubjugated. In its brutal assault against Iraq, imperialism is giving notice that it intends to restore the type of unrestrained domination of the backward countries that existed prior to World War II.

US imperialism’s effort to reconquer the world has not only created an immense human disaster, it has ended in a catastrophe for the United States. As the most recent issue of Foreign Affairs makes clear:

U.S. policymakers have for nearly three decades converged around the premise that Pentagon planners set forth in 1992: the United States should maintain a military superiority so overwhelming that it would dissuade allies and rivals alike from challenging Washington’s authority. That superiority quickly became an end unto itself. By seeking dominance instead of merely defense, the strategy of primacy plunged the United States into a downward spiral: American actions generated antagonists and enemies, who in turn made primacy more dangerous to pursue.

Even as the United States’ series of bloody wars have created one disaster after another, US imperialism sees, with characteristic hubris, new wars and new threats as the means to extricate itself from this crisis. But this promises only new disasters.

The bluntness with which the representatives of the imperialist powers speak of their preparations for world war expresses the immense dangers confronting humanity and the urgency of building a new mass antiwar movement based upon the international working class.

About the author(s)
The author is a geopolitical analyst with wsws.org, a Marxian publication.