Home AMERICAN BRAINWASH Is Moscow Aiding the Sanders Campaign? “Russia Again Gate”, But this Time in Favor of the “Progressive Dems”

Is Moscow Aiding the Sanders Campaign? “Russia Again Gate”, But this Time in Favor of the “Progressive Dems”

February 24, 2020
Please make sure these dispatches reach as many readers as possible. Share with kin, friends and workmates and ask them to do likewise.

Russiagate should have been called Hillarygate

At this stage in the Dem party campaign to choose its standard bearer in November, Sanders leads other aspirants in national polls.  As in 2016, DNC bosses likely prefer another candidate to head their ticket, a more reliable figure to assure continuity. 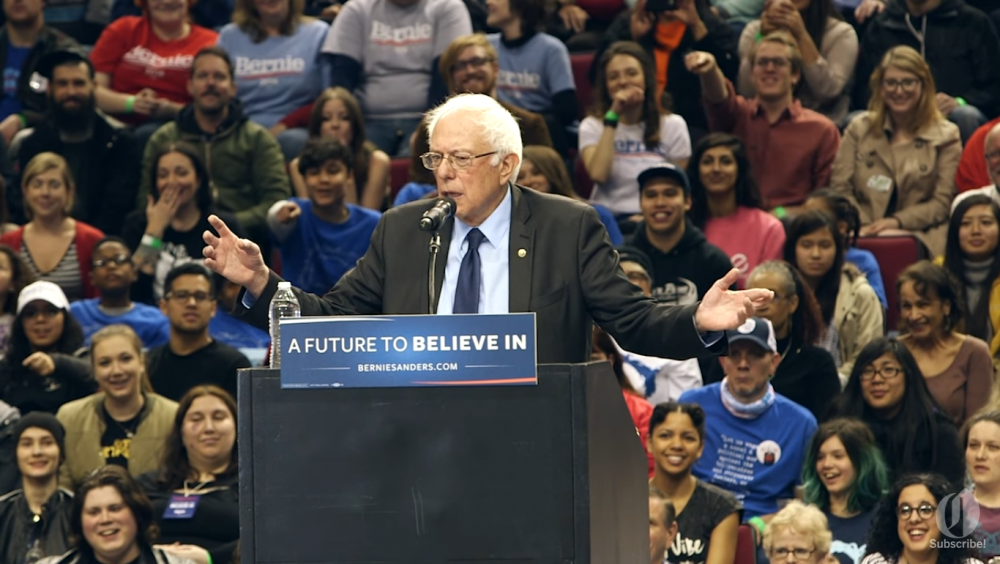 If the past is a true guide to the future, Sanders may prove to be what many critics have suggested, a Democrat loyalist in radical clothes. If he does another loyalty pledge to the party’s nominee in 2020 it will be too late fr the followers to react properly, but still, all hell may break loose. Sanders has aroused too many expectations. (Credit: TGP)

The US political system works this way. Both right wings of the one-party state operate the same way — so dirty business as usual continues uninterrupted in the aftermath of each election cycle.

Based on his voting record, especially on geopolitical issues, Sanders goes along with party bosses to get along, his actions and rhetoric worlds apart.

So why aren’t Dem party bosses comfortable with him as standard bearer? He goes along most of the time with longstanding US domestic and foreign policies.

They prefer someone who always operates this way, a safe candidate like Biden or others like him.

In 2016, the process was manipulated for Hillary to win. Hard evidence showed shenanigans for her in Iowa, Arizona, New York, Massachusetts, and elsewhere.

Former interim DNC chair Donna Brazile discussed what went on in her book titled “Hacks: The Inside Story of the Break-ins and Breakdowns that Put Donald Trump in the White House.”

Discussing her book pre-publication in 2017, she said the following:

“I stumbled onto a shocking truth about the Clinton campaign…I followed the money.”

Brazile’s DNC predecessor Debbie Wasserman Schultz “let Clinton’s headquarters (run things) so she didn’t have to inform the party officers how bad the situation was.”

Hillary and her minions ran things to assure her nomination. “(T)he party (was) fully under the control of Hillary’s campaign,” Brazile explained.

Ahead of the convention, Brazile told Sanders that she found a “cancer” in the system — Hillary’s chokehold over the DNC, “exert(ing) control of the party long before she became its nominee.”

The books were cooked for her in advance. As a Dem insider, Brazile had hard evidence to support her accusations.

On the issue of alleged Russian US election meddling, not a shred of evidence proving it ever surfaced because none exists — not in 2016 or now.

In US judicial proceedings, credible evidence is required to prove or disprove claims.

It may come from witnesses, documents, and/or other materials.

In civil cases, a preponderance of evidence suffices. In criminal cases, it must be “beyond a reasonable doubt” to convict.

Since US intelligence community accusations of Russian US election meddling surfaced during the 2016 presidential campaign, no evidence whatever was presented to prove it — clearly showing none existed.

In a US court of law, accusations without corroborating evidence are considered groundless. The same standard holds in regards to politics and related issues.

The Big Lie about Russian US election meddling won’t die because establishment media keep it alive with spurious reporting.

Most everything pounded into the public mind repeatedly without letup gets most people to believe it.

In its latest edition, the Washington Post headlined “Bernie Sanders briefed by US officials that Russia is trying to help his presidential campaign (sic),”saying:

“Russia is…interfer(ing) with the (Dem) contest” on his behalf, citing unnamed “people familiar with the matter (sic).”

“It is not clear what form that Russian assistance has taken (sic),” adding:

Some inconvenient facts WaPo omitted were as follows:

During the 2016 US presidential campaign, RT, RT America and RT en Espanol spent $274,100 for 1,823 US ads, its editor Margarita Simoyan explained.

Small amounts were spent on Google advertising — none of the above connected to supporting one US presidential aspirant over others.

Compare these amounts to Center for Responsive Politics data. In 2016, the amount spent by US presidential aspirants was $2.4 billion, including for primaries.

In all races, Republicans and Dems each spent around 48% of the total amount (96% combined).

Compared to these huge amounts, what possible impact could a few hundred thousand dollars have to influence the US electorate — even if that was the intent. Clearly it wasn’t.

Throughout the 2016 campaign, no evidence showed Russian attempts to try influencing US voters or interfere in its electoral process in other ways.

Facebook reported that over half of Russian ads on its platform appeared after the US 2016 presidential election.

Only around 1,000 ads, allegedly connected to Russia, appeared during the 2016 presidential campaign, mostly expressing no preference for any candidate.

Facebook said US presidential candidates spent hundreds of millions of dollars in online  political advertising – “1000x more than any problematic ads we’ve found” – admitting virtually no evidence of Russian use of the platform for improper meddling.

Twitter’s vice president Colin Crowell explained that “(w)e have not found accounts associated with this activity to have obvious Russian origin but some of the accounts appear to have been automated.”

Twitter at the time suspended 22 suspicious accounts, another 179 suspended for alleged terms of service violations – nothing connected to Russia.

No evidence suggested Russian US election meddling online or in other ways — in 2016 or currently.

Russiagate should have been called Hillarygate. With considerable media help, she, her campaign, and the DNC cooked the books for her to be Dem standard bearer.

Will things be cooked against Sanders this year or not?

If chosen in July to be Dem standard bearer because of strong public support, rest assured he’ll play ball with party bosses.

The money-controlled US political system is too debauched to fix, a fantasy democracy, never the real thing from inception.

If they changed things to assure governance of, by, and for everyone equitably, they’d be banned.

They’re “paranoid announcements, which unfortunately will multiply as we get closer to the (US) election.”

“Of course, they have nothing to do with the truth.”

Stephen Lendman is an award-winning author who lives in Chicago. He can be reached at lendmanstephen@sbcglobal.net. He is a Research Associate of the Centre for Research on Globalization (CRG) His new book as editor and contributor is titled “Flashpoint in Ukraine: US Drive for Hegemony Risks WW III.”

We’re Asking One Question In Assange’s Case: Should Journalists Be Punished For Exposing War Crimes?